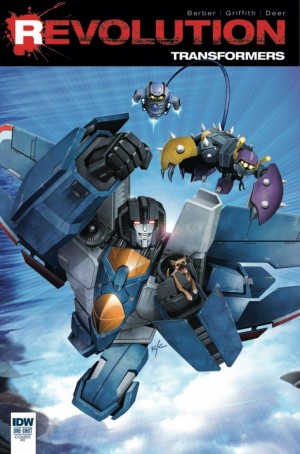 The next book to tie in with the IDW Publishing Revolution crossover event is the John Barber/Andrew Griffith The Transformers series, wrapping up (for now) the presence of Cybertronians on Earth - with a good dose of Thundercracker and Buster (plus Bob, DOC, and Marissa Faireborn). Check out the full preview via Comics Alliance below, and head back to Seibertron.com next week for our review!

Transformers: Revolution #1
John Barber (w) • Andrew Griffith (a) • Marcelo Matere (c)
THUNDERCRACKER AND BUSTER SAVE THE WORLD! A DECEPTICON who wants to be a screenwriter. A dog who wants to, I don’t know, eat stuff and chase squirrels or whatever dogs want to do. A White House under siege by DIRE WRAITHS. And the phone call that brings them all together.
FC • 32 pages • $3.99

WINDBLADE ON EARTH! The mysterious link between METROTITAN and MICROSPACE threatens to tear two universes apart, and only WINDBLADE has a chance to heal the Titan… and there she learns a terrifying secret that changes the stakes of the REVOLUTION.

Shuttershock wrote:I see Thundercracker has been catching up on his Seinfeld recently. Excellent!

I answer the phone the same way when it's obvious who it is & they're (predictably) frantic about "nothing." The reactions are hilarious, but people rarely get the reference.
Re: IDW The Transformers Revolution #1 (One-Shot) Full Preview (1835645)
Posted by Kurona on October 22nd, 2016 @ 12:22pm CDT
And so the rest of the preview continues to prove the Thundercracker one-shot is going to be the best thing about this event. Trust him to do so :')

ricemazter wrote:Wait, if the human government is aware that dire wraiths exist doesn't that put ROM out of a job?

It didn't when they found out in the Marvel book. They still have no idea how to tell who's a Dire Wraith and who's not.
Re: IDW The Transformers Revolution #1 (One-Shot) Full Preview (1835713)
Posted by Kurona on October 22nd, 2016 @ 3:57pm CDT
And, uh. Earth is one planet. Apparently they're spread out through the entire universe.
Re: IDW The Transformers Revolution #1 (One-Shot) Full Preview (1835816)
Posted by D-Maximal_Primal on October 23rd, 2016 @ 12:58am CDT
iTunes has provided us with a new preview, this time for Revolution #4! This sneak peak picks off right where #3 ended, and in a special way. With the silent Snake Eyes taking center stage, the whole 3 page preview is done in the "silent" form with only the art speaking for itself, and no speech bubbles to be found. It is unclear if the whole issue will follow this suit. Check out the full preview below.

SILENT INTERLUDE! One human has the skill to break into AUTOBOT CITY—but what is SNAKE EYES going to do when he finds himself face-to-knee with OPTIMUS PRIME? And outside, MILES MAYHEM and the M.A.S.K. team wait to see who walks out alive…

Transformers: good read and a nice send off to the title. Thundercracker remains a great character that I enjoy, and his little animal team was adorable. Wonder where Sunstreaker is though? But combining has made them friends, which is fun for me. the whole Dire Wraith thing felt like it came out of nowhere, but apparently Revolution #4 is supposed to help with that. the fact that so many were in the White House was an issue was well. Plus, that one dude totally had his fingers ripped off, metal. Storytelling did feel a bit rushed and there were lots of jokes, but overall I liked it.

Action Man: I thoroughly liked it. The Iron Giant made the whole comic for me honestly. Plus, we're finally getting around to the point that people are liking Transformers, realizing they are living things, and that Mayhem is slime. Plus, Action man + Kup + Mayday = revolutionaries set up. Spike and Talon felt completely useless in the story though, like they were obligated to be there but there was no effort to make them mean anything. they were just annoying and grumbling.

Synopsis
THUNDERCRACKER AND BUSTER SAVE THE WORLD! A DECEPTICON who wants to be a screenwriter. A dog who wants to, I don’t know, eat stuff and chase squirrels or whatever dogs want to do. A White House under siege by DIRE WRAITHS. And the phone call that brings them all together.

I am still catching up on schedules and timings, so apologies for the slightly late review again! And, with that out of the way, a word of warning: I have not had the easiest time with this comic or its review. I spoke to other staff members, and took a look around other readers to form a better idea of it. I'm still unsure about some aspects, too. BUT - read on for more!

The Transformers ongoing dips its toes in the Revolution pool by letting John Barber bring us back to one of the unsung heroes of the series, Thundercracker - and it's definitely the most apt choice that could've been made for the setting and plot: Earth lover, dealing with Earth issues and truths and things that may not be what they seem.

The device used in the script - using the infamous Josh Boyfriend screenplay as running introspective commentary - is well placed, and nicely executed. Sometimes, however, I felt like some of the action was forced for the sake of a joke or a twist in the words, and it jerked me out of the enjoyment. On the other hand, we also get some very nice Faireborn characterisation, and some good moments with sounboards Buster, DOC, Bob, too.

The plot itself, while obviously not irrelevant, is nothing to write home about, and the book truly is about Thundercracker's place in the conflict, in the story, in the factions, and in relation to the characters around him since we've seen him return in the IDWverse. But for me, sometimes, that doesn't land fantastically. Yet more thoughts below.

It's good to see the other hand responsible for this incarnation of the big blue back in action on the title, and Andrew Griffith brings all of his experience into the visual side of the book, with some great layouts and accompanying presence to the wordings - including some of the human features that I still at times find a little off putting (some of the jawlines, mainly), though never too distracting.

A relatively new colour collaborator joins Griffith on the book: Teyowisonte Thomas Deer. We've seen in on covers and in action on Till All Are One, but the style he uses with this linework is more muted, perhaps a little grittier and definitely fitting the Dire Wraiths plot side of the story - and a pleasure to watch, really. Some of the contrasts in palette are top notch.

Lettering wise, we also have a new name: Gilberto Lazcano. And he really does bring it all: the screenplay captions, the Dire Wraith dialogue, the differences in volume and the sound effects are incredible, and incredibly well balanced, something that is very much needed with this type of issue. And of course, we once more have a whole lotta covers, so you can pick and choose, from Matere to Griffith and Lafuente, to Christiansen to Ramondelli (thumbnailed), to Tyndall and Moss, via Coller and Bove.

The script device, while amusing and introspective as I said above, can also lead to some crowded panels, and the visual team are good at making sure they're not over crowded, but still. It got in the way at times, and I kept thinking something was off - though I still cannot figure out what or why (there are definitely some editing issues, that much is true).

This issue, more or less

The dialogue is good, but the words are busy; the art is busy, but it does everything pretty much right; the lettering, the colouring, the layouts are clearer than what the script might create, and the story is impacting the Revolution plot somewhat tangentially, and it leaves a great hook for Thundercracker from here on. So please bear with me as I try placing my finger on what didn't work for me.

Kurona wrote:I loved it personally. Easily the best thing out of Revolution so far - it's funny, it advances the plot, it has characters that are fun and I actually care about, there's none of the trite let's-me-and-you-fight-over-stupid-shit-even-though-we're-obviously-gonna-end-up-allies that has made Revolution such a bad read... this is great. I loved it.

I know that's what it was, and by all means and reasons I should've loved it too. But I didn't. And I cannot figure out why.

Kurona wrote:I loved it personally. Easily the best thing out of Revolution so far - it's funny, it advances the plot, it has characters that are fun and I actually care about, there's none of the trite let's-me-and-you-fight-over-stupid-shit-even-though-we're-obviously-gonna-end-up-allies that has made Revolution such a bad read... this is great. I loved it.

I know that's what it was, and by all means and reasons I should've loved it too. But I didn't. And I cannot figure out why.

I can certainly see why it'd fall flat for someone too. It has all the ingredients it needed to be great - great characters, great dialogue, great art, great... an okay story for those to play on - but it was kind of... a bit overcooked? I don't mind that because if my fish is a little burnt it's okay, but it's definitely not gonna taste as great as it could have been.
Re: IDW The Transformers Revolution #1 (One-Shot) Full Preview (1837498)
Posted by Va'al on October 28th, 2016 @ 4:12pm CDT
Coming next week is the fourth part in IDW's multifranchise crossover Revolution, and we have Snake Eyes and what's left of G.I. Joe taking centre stage, and some odd timeline clashing (as the GI Joe one-shot hasn't happened yet) - check out below the full preview for Revolution #4, via Newsarama (kinda), and head back here for review after its release!

Revolution #4 (of 5)
Cullen Bunn & John Barber (w) • Fico Ossio (a) • Tradd Moore (c)
SILENT INTERLUDE! One human has the skill to break into AUTOBOT CITY—but what is SNAKE EYES going to do when he finds himself face-to-knee with OPTIMUS PRIME? And outside, MILES MAYHEM and the M.A.S.K. team wait to see who walks out alive…
FC • 32 pages • $3.99

Re: IDW The Transformers Revolution #1 (One-Shot) Full Preview (1837515)
Posted by D-Maximal_Primal on October 28th, 2016 @ 5:08pm CDT
I really don't like the art that much here. I was ok with it at the beginning but Arcee oh Arcee
Click here to view additional comments about this topic at the Energon Pub Forums ...