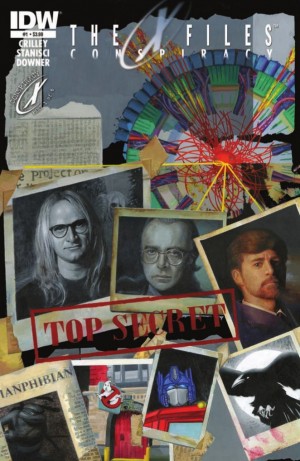 The new year also brings us something different, courtesy of IDW Publishing. You may remember the 2013 Infestation storyline, in which all the licensed franchises crossed over - this year, The Lone Gunmen and FBI agents Mulder and Scully take on mutant turtles, ghost-hunters and.. shape-shifting robots! Check out below the preview for The X-Files: Conspiracy #1!

The event of the year begins here! When The Lone Gunmen discover Internet files from the future, they learn that a plague will soon wipe out most of humanity. With Agents Mulder and Scully working one lead, the Gunmen must spring into action and investigate several urban legends: a group of ghost-hunters, mutant turtles that live in the sewers, shape-changing alien robots, and a vengeful spirit from beyond the grave!

Bullet points:
• Ask your retailer about the Joe Corroney “tabloid” variant covers for each issue of the event!
• Each issue has a special subscription variant that depicts famous conspiracies with a new twist!

IDW to Lose Transformers Comics License at the End of 2022

Solicitations for the IDW Transformers Comics Coming in April 2022

IDW to Lose Transformers Comics License at the End of 2022

Posted 3 days ago
News Categories: Toy News, Movie Related News, Cartoon News, Comic Book News, Site News, Rumors, Event News, Digital Media News, Collectables, Sponsor News, Game News, Site Articles, Store News, Company News, People News, Reviews, Press Releases, Sightings, Unlicensed Products News, Auctions, Transtopia, Interviews, Knock Offs, Collector's Club News, Editorials, Heavy Metal War, Podcast, Contests, Book News, Top Lists
Click here to post your comment about this news story!
Re: IDW The X-Files: Conspiracy #1 Preview (1541842)
Posted by #Sideways# on January 14th, 2014 @ 8:46am CST
Gosh dangit CERN. Why do you have to be so evil. I'm serious! Steins;Gate has so spoiled the topic of CERN (called SERN, in the show) for me. As well as this CERN time travel thing. I enjoy this subject too much when it is in the show, but if this comic tries to pull off the "evil research company" thing, I can't help but to think about it like a Steins;Gate ripoff.

Some of the designs are a bit... Odd looking in some frames. Maybe it's just me, and maybe it's just that I'm used to IDW's Transformers comics, but I dunno. Some of them just look odd. Like when CERN is first mentioned, that guy's arms are really tiny, in my opinion.

thanks for the info!

No problem! Come back in the morning for the Seibertron.com review of the issue, too.

(Well, considering Jurassic Park's dinosaurs running wild on top of everything else would be asking too much...)
Re: IDW The X-Files: Conspiracy #1 Preview (1542012)
Posted by Bouncy X on January 14th, 2014 @ 9:54pm CST
i love x-files....i love transformers...i love ghostbusters...but having them all cross over together sounds like a really retarded idea. thank god its just in comics.
Re: IDW The X-Files: Conspiracy #1 Preview (1542051)
Posted by Va'al on January 15th, 2014 @ 2:03am CST
Coming in to have a say on the new IDW Publishing inter-franchise event, a fan of the X-Files Season 10 comics series so far, and fellow staff member: Burn!

It's a classic X-Files story and a great introduction to the latest IDW company cross-over. Here's hoping the standard continues, if it does, it will be a mini-series well worth picking up.
Re: IDW The X-Files: Conspiracy #1 Preview (1542113)
Posted by robotmel on January 15th, 2014 @ 9:31am CST