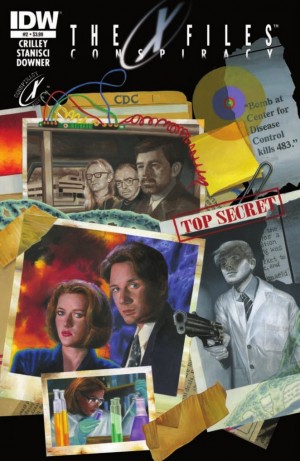 Two pieces of news, which are actually previews, from IDW Publishing this week. The first one has little to do with Transformers per se, but brings the multi-franchise crossover X-Files Conspiracy to an end. Take a look at the full preview below!

The X-Files: Conspiracy #2 (of 2)
Paul Crilley (w) • John Stanisci (a) • Miran Kim (c)
The event of the year concludes here! The Lone Gunmen have finished investigating several urban legends—a group of ghost-hunters, mutant turtles that live in the sewers, shape-changing alien robots, and a vengeful spirit from beyond the grave—after receiving Internet files from future that foretell a plague that wipes out most of humanity. Now it’s a race against the clock as the Gunmen, with Agents Mulder and Scully, attempt to save the world!
FC • 32 pages • $3.99

Bullet points:
The event of the year sees characters from The X-Files interact with the Ghostbusters, Transformers, Teenage Mutant Ninja Turtles, and The Crow!
Ask your retailer about the Joe Corroney “tabloid” variant covers for each issue of the event!
Each issue has a special subscription variant that depicts famous conspiracies with a new twist!