IDW The X-Files: Conspiracy - The Transformers 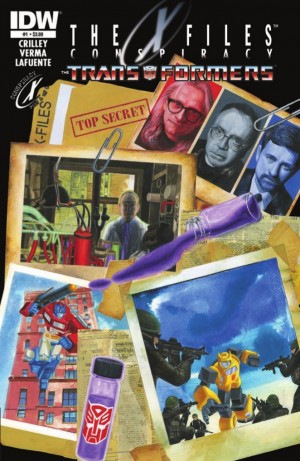 We did promise you more robots! IDW Publishing's franchise crossover continues, as the Lone Gunmen find some actual aliens - and we've seen these before. Check out the full preview for the Transformers focused issue below, and come back tomorrow for the Seibertron.com review.

synapse wrote:Bumblebee's face looking like a nutcraker seems epic to you guys?

I never said "epic", which is so overused it's lost its meaning; I said "decent". The art isn't perfect, but it's passable.
Re: IDW The X-Files: Conspiracy - The Transformers (1553648)
Posted by Va'al on February 26th, 2014 @ 6:55am CST
Thanks to the invaluable assistance of staff member from down-under Burn, we get another look at IDW Publishing's The X-Files Conspiracy: The Transformers one-off, the latest chapter in the company's franchise crossover. Read on below for the 'brutally honest review'!

Burn wrote:The Assassination of John F. Kennedy ... NASA faking the moon landing ... the Roswell crash of 1947. These are some examples of conspiracies that have captured the minds of thousands of people around the world for decades.

IDW's "The X-Files:Conspiracy", is not something that captures the mind.

Thus, we come to the latest instalment of "The X-Files:Conspiracy", IDW's company wide crossover. In this weeks chapter the travelling trio of The Lone Gunmen meet up with one of their "forum contacts" who turn out to be none other than Optimus Prime and Bumblebee who are searching for their lost comrade Ratchet.

Our beloved Cybertronians, quick to reveal themselves to the conspiracy theorists, exchange stories with TLG and utilising a bit of Cybertronian computer power they manage to track down the individual who released the initial virus outbreak (you may remember it happening back in the very first chapter) and a road trip later, The Gunmen and their new Autobot friends are knocking on his Motel door.

Quick to squeal, details of virus are revealed along with the location of Skylogic Systems, the lab where the virus was first developed (but later manufactured elsewhere).

And one Bumblebee trans-scan and a bit of holographic technology later, Bumblebee and The Gunmen are infiltrating Skylogic Systems where they quickly discover Ratchet who they quickly free.

Then security shows up but as expected, our valiant conspiracy busters are able to escape along with the location of where the virus is manufactured.

So with the day saved and another part of the conspiracy uncovered (and the Autobots providing The Gunmen with what I can only assume is a sample of their "C.N.A.") our heroes go their separate ways with the Autobots riding off into the night and The Gunmen settling into a Motel for the night unaware they're about to be attacked ... which will no doubt be resolved in the next chapter as The Gunmen meet The Crow.

Unlike previous chapters, the guest characters in this issue were different from their regular franchise appearances. How so? We have a very G1 Optimus Prime, a Generations body Bumblebee with the personality of a 1980's cartoon Bumblebee, and a TF:Prime style Ratchet (we don't get to see his personality). So in addition to crossing over with other franchises, it looks like they've attempted to cross generations as well.

So that ends another chapter in Conspiracy with just two more issues remaining and I'll be back with my brutally honest reviews for them!