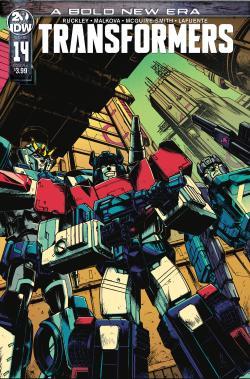 Attack on Titan
A Seibertron.com Semi-Spoilerish Review of IDW Transformers #14

Now shipping monthly! The Ascenticon Guard, Security Operations, and The Rise are caught in a three-way faceoff. Cybertron is teetering on the brink of chaos, but there is still hope for peace. And leading the way to restore that peace are the only bots that make sense: Megatron, Soundwave, and Starscream!

After a bit of a hiatus, we return to you with a review for the just released IDW Transformers #14, part of the Bold New Era. And as for how that Bold New Era is doing, keep reading below! And for more information on this issue, you can check out our database entry!

There is a light that never goes out

But after the Rubble of issue 5 and the return of Sentinel Prime to Cybertron, it seems the story might finally be making some ground. While it still wasn't very deep, there was some excitement to the story, it felt like there were more risks and consequences. We also learned some things about a few characters and also got to see some new ones. Motivations that were seemingly not there or unclear have focused in some, and we got some more character development, though we still don't really have many highly intriguing characters.

Pictured: a new character and one existing character sorely needing some fiction

I liked the inclusion of Starscream in this issue, and he proved to be a welcome addition, bringing to the table some of the traits described in the paragraph above. I also think it was important for Orion Pax to be entirely absent and Megatron to only briefly show up. Both characters are very important Transformers characters, but so far have proven to be more attention vacuums than intriguing characters. It was good to have a good sized cast represented here without them with a chance to shine on their own, and Starscream, Soundwave, and to a lesser extent Sideswipe, Kup, Landmine, and Geomotus.

On another note, the inclusion of Strongarm alongside Sideswipe in this issue is a continued sign of the thing I so far like most in this comic: the variety of the characters showing up. Sure it has a lot of G1/Siege going on, but non-G1 characters showing up and referencing things outside of previous G1 stories is refreshing. I enjoy inclusions such as this, and want a little bit more of those characters and story too. The comic has showed a cast with variety, it just needs to flex that diversity a bit more.

Art for this issue is split between Anna Malkova and Bethany Mcguire-Smith on lines, Joana Lafuente on colors, and Tom B. Long on letters. The art for the series so far has been a bit loose and all over the place in terms of quality, but outside of issue 13, I feel this is the best comic issue in terms of artistic consistency. While there were some questionable shapes thrown during this issue (Nautica being a primary offender compared to her prior appearances), the art overall was good quality, the two line artists had similar styles that allowed for a smooth transition between the artists, and the facial expressions were very well done in this issue.

The colors matched up with the line art pretty dang good as well, giving you a good sense of what time it is on Cybertron, and it also helped give the book some depth, showing shadows and sun glistening off of the lined surfaces. It was very pleasing to look at. The glowing optics were also a highlight in terms of colors.

The lettering is once more of good quality, and helps compliment the art while not getting in the way. I also enjoyed the word effects for all the different types of action happening throughout the issue, it helped augment the lines and colors of the different panels.

Overall, I would argue that this is the best overall chapter of the Bold New Era so far. We had a good first issue that helped set things up, but after that, there haven't been many highlights, and the ones that have happened have had a bit too much dead space between them to truly have a impact. If issue 14 had come earlier, such as being issue 8 instead of 14, I feel like the story would be progressing better and more coherently. The story needs better pacing and some more intrigue to it. We don't necessarily need to be told everything, let stuff happen in the background. Speech and walking heads can get in the way.

On those notes, issue 14 seems to be a step in the right direction. No real depth, nothing really to pick up with a 2nd read, but it was intriguing, it had some depth to it, and it made you want to actually read through it again. If we can actually keep this tempo up, the story will progress and we will start having some more depth and more enjoyment for the readers.

If I put this issue in a vaccuum it was pretty entertaining. Overall it isn't in a vaccuum though, so my confusion on why this is all happening to this degree dampens the experience. This is turning into Char's Counterattack where the motivations are all explained but the actions based on them take such a leap that I have a hard time believing the characters.

Also still find the dialogue too stiff and not character driven, for the most part. The Nautica, Prowl and Road Rage scene would be an exception where that was done better.
Re: IDW Transformers #14 Review (2044046)
Posted by Rodimus Prime on November 7th, 2019 @ 12:36pm CST
I like the art. Crisp colors and lively panels, unlike Galaxies. Why is it that I can't get a book where both the art and story are good? Why does it have to be one or the other? My opinion only, of course.

I pretty much gave up on this book, but I still read the reviews out of morbid curiosity. Maybe eventually it'll pick up.
Re: IDW Transformers #14 Review (2044444)
Posted by ZeroWolf on November 12th, 2019 @ 2:09pm CST
Greetings Seibertronians! For all of you following IDWs reboot of Transformers and it's spin off, Galaxies, we have new images of the Retailer Incentive covers for Transformers ongoing issue #15, Transformers: Galaxies #3 and #4! The images come from comics website Previewsworld. 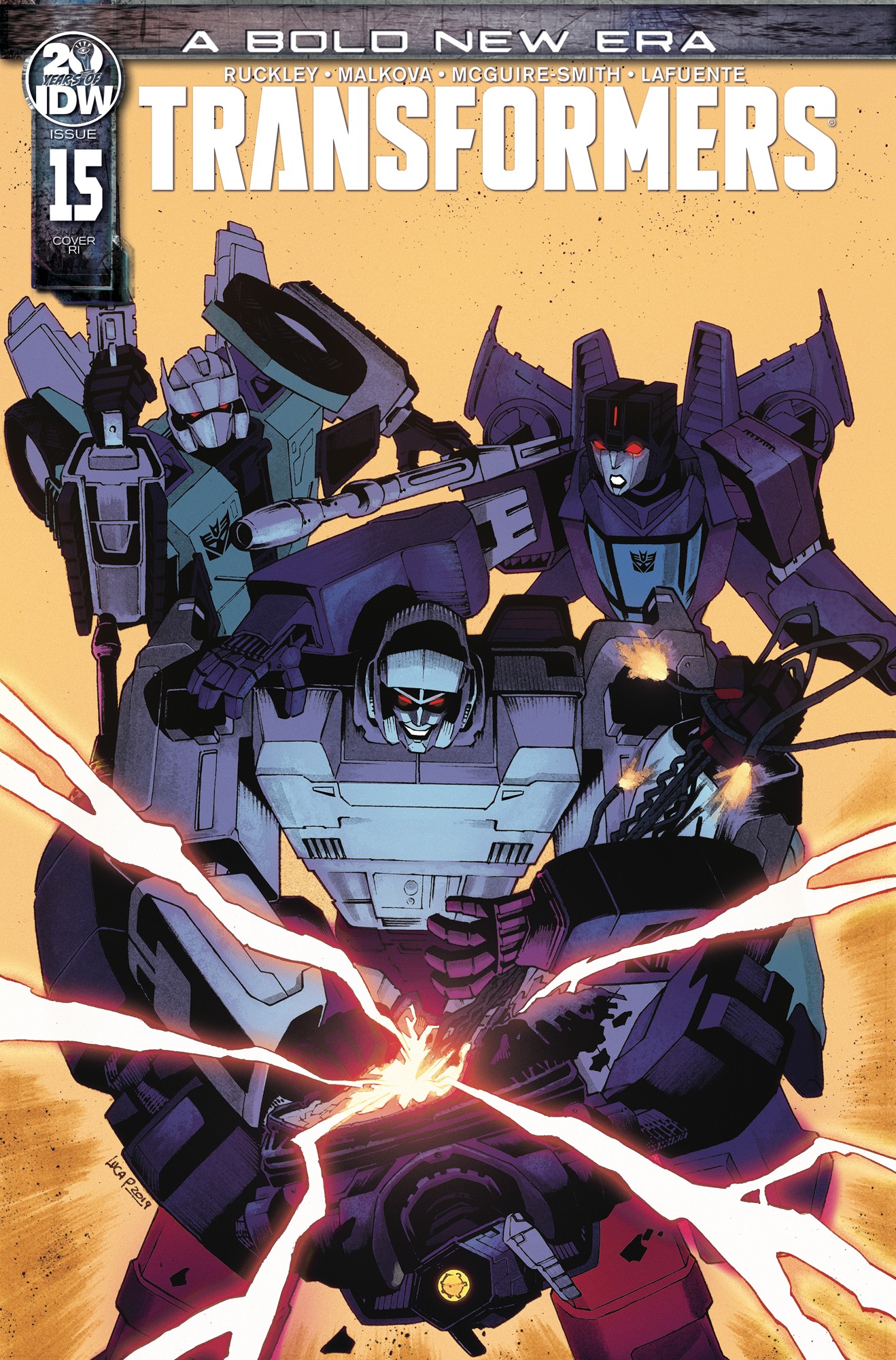 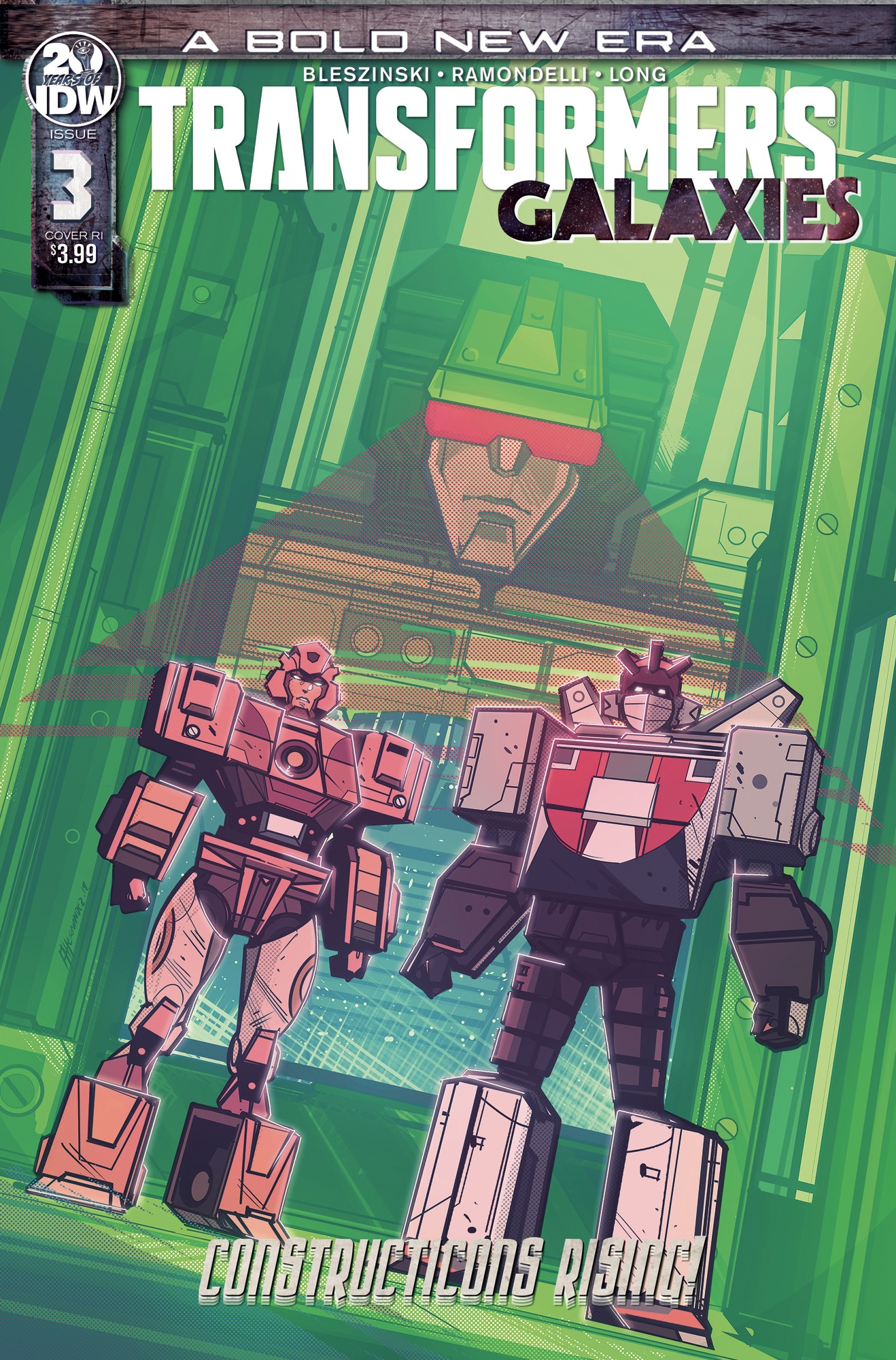 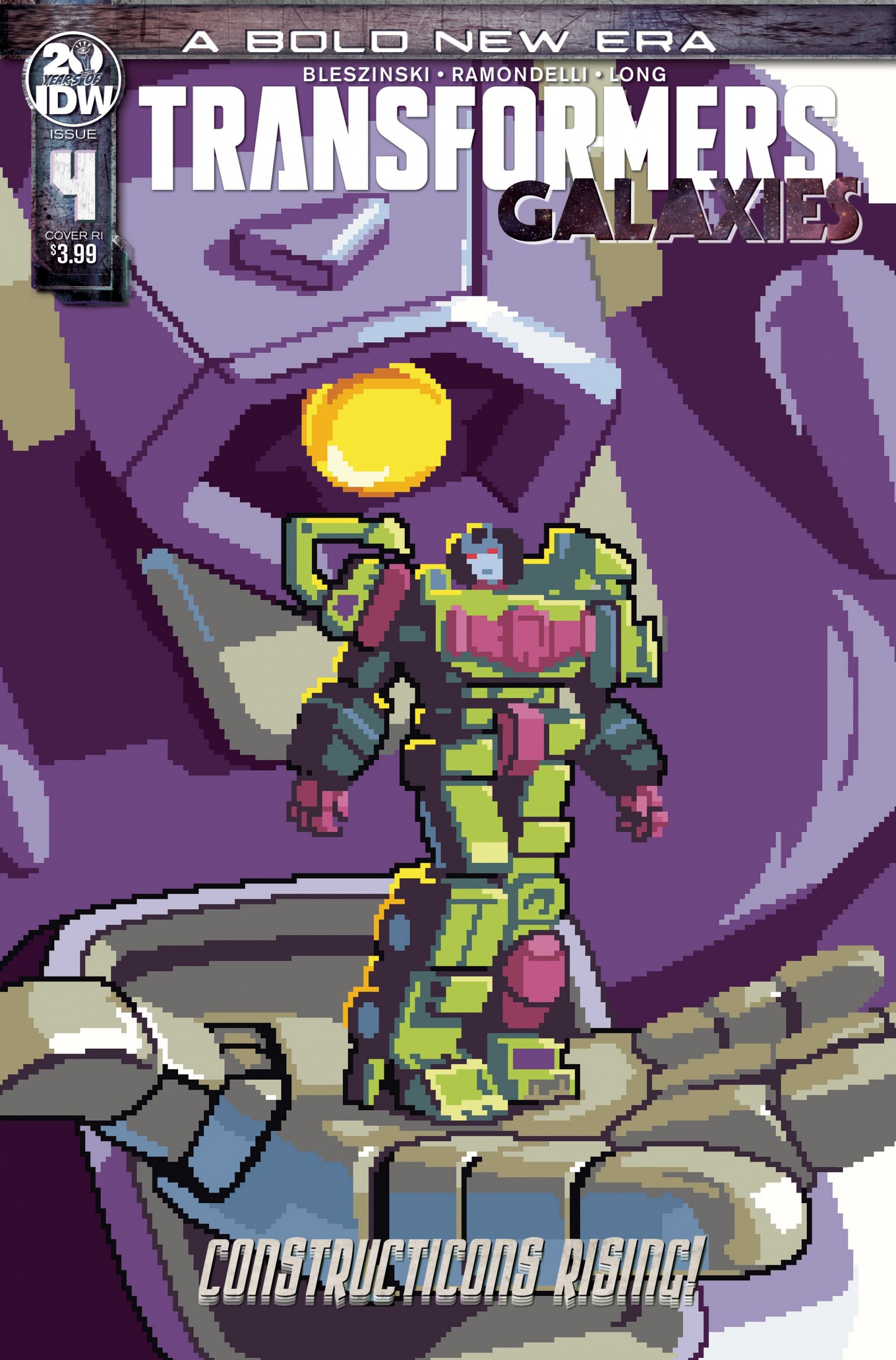 What do you think of these covers? How are you liking the series so far? Let us know in the Energon Pub and stay tuned to Seibertron for all the latest news and reviews!
Re: IDW Transformers #14 Review (2044607)
Posted by Big Grim on November 14th, 2019 @ 4:04am CST
I've stuck with the ongoing this long but it's really starting to test me. I'd like something to happen please.

Big Grim wrote:I've stuck with the ongoing this long but it's really starting to test me. I'd like something to happen please.

Strangely the 2 issues of Galaxies thus far I've enjoyed. Interested to see where that's going, unlike the ongoing.

Not strange at all! Galaxies has Transformers doing Transformers things, has a tight cast, is developing its characters and has some great hooks (no pun intended) for its plot which has just enough layers and connections to the outside universe to be intriguing.

The ongoing has robots cosplaying as Transformers speaking in platitudes while walking up and down stairs. Sometimes they shoot at one another now.
Re: IDW Transformers #14 Review (2044762)
Posted by Big Grim on November 15th, 2019 @ 11:36am CST

ScottyP wrote:Not strange at all! Galaxies has Transformers doing Transformers things, has a tight cast, is developing its characters and has some great hooks (no pun intended) for its plot which has just enough layers and connections to the outside universe to be intriguing.

The ongoing has robots cosplaying as Transformers speaking in platitudes while walking up and down stairs. Sometimes they shoot at one another now.

Wow. You are bang on the money mate! The ongoing is boring with extra helpings of dull.

We're getting interesting character development of the Constructicons AND Insecticons and we're only 2 issues in.