IDW Transformers / Back to the Future #1 Review 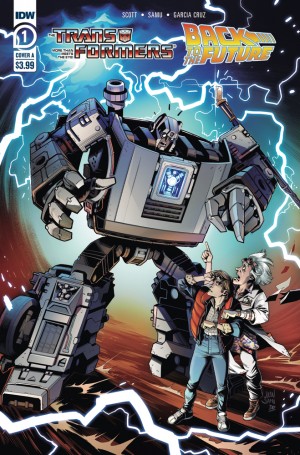 No Briefcases
A Review of Transformers / Back to the Future #1 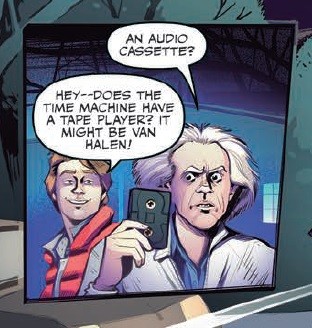 RIP EVH
The first page of the first issue of Transformers / Back to the Future contains a letter from Doc Brown telling you, in so many words, to not take it too seriously. This is wisdom to take to heart, as this is another G1 crossover with a pop-culture franchise that's a quick read meant just for fun. Will you have fun reading it? Read on in this review to see if you, from the future, will tell you.

Beelieve? Anyone?
As mentioned, and as most readers probably expected after similar crossover books like Star Trek vs Transformers, Transformers Ghostbusters and Transformers vs Terminator, a Transformers cast very close to their G1 cartoon incarnations is back for more adventure. If you enjoyed those books you're almost certain to enjoy this as well, because the overall tone delivered by writer Cavan Scott is basically identical. The plot beats a drum somewhere between the aforementioned Ghostbusters and Terminator books so far, mingling lighthearted buddy comedy with Doc Brown and Marty with jumps around in spacetime to possible apocalyptic futures. 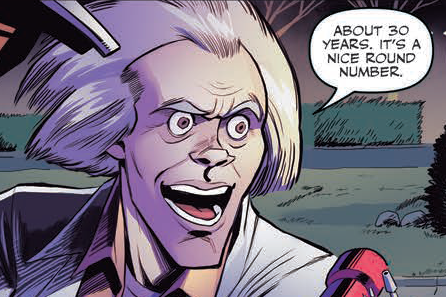 This is how long it takes lady robot characters to get toys
The focus feels like it skews heavier to the Back to the Future cast, but this is likely due to a somewhat limited Autobot presence throughout this initial issue. Whether or not the BttF cast is portrayed effectively or faithfully is outside of this reviewer's expertise, but I can say that what I remember of Marty, Biff and the others comes across here as expected. There does seem to be some expectation of reader familiarity with those characters moreso than with the Transformers, which is probably fair but readers of this site are in the one audience where that's not really a positive.

These are a page apart
Juan Samu returns to drawing the occasional Transformer here, as the other three of you that read IDW's M.A.S.K. series may recall. The linework is good overall though inconsistent, with one example being the two Soundwaves encountered one right after the other. Samu shows definite talent in depicting the transformation sequences in particular, so I'll be watching to see if he can nail down consistency in character proportions and tone down some of the overly exuberant facial expressions. David Garcia Cruz provides the colors with lighting and effects jumping out as a fantastic addition to the visual presentation of some scenes. Neil Uyetake's letter work never stood in the way and was easy to follow, though some of Gigawatt's narration was a bit confusing - there were times I thought it was Marty. The editorial duo of David Mariotte and Chase Marotz kept this initial issue's scope in appropriate check, as it features just enough progression to set up the rest of the mini-series while providing a hook for readers to return next month.

Samu and Garcia Cruz provide the art for the "A" cover which is featured in this review's news story thumbnail. Past crossover artists Philip Murphy and Dan Schoening deliver the "B" cover and 10 copy retail incentive cover, respectively, while a nameless Hasbro photographer's promo shot of the Gigawatt toy graces the 25 copy incentive. As always, you can find all the cover images, full credits for the issue and a list of all the characters that appear in the book through our Vector Sigma Database page for Transformers / Back to the Future #1.

This isn't space!
Whether or not you'll enjoy this probably comes down to your attitude towards crossovers, affinity for the franchises aside. If you enjoy them and enjoyed books like the Ghostbusters, Star Trek and Terminator crossovers, you'll enjoy this. If you don't, or are starting to get fatigued by the constant appearance of only the G1 cartoon cast in these types of books, you may want to steer clear as I don't suspect this is going to do anything for you which earlier crossovers didn't. For this reason, two scores are presented below:


Final Score - "I think crossovers are just for, and really are, fun" Version
.

Final Score - "I don't like and/or am sick of crossovers" Version
.

Look out for this issue today, October 7th, where you can pick it up at the Seibertron.com eBay store or at your local shop, check here to find the closest shop to you.

Re: IDW Transformers / Back to the Future #1 Review (2083220)
Posted by Big Grim on October 9th, 2020 @ 2:50am CDT
Bought it. Seems like harmless fun, same as other IDW crossovers. Hope it's a little more satisfying than Terminator.