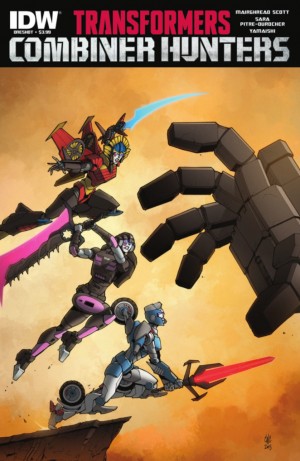 As we leave the month of July behind, and as Newsarama lifts the embargo, IDW Publishing brings us all the updates left in its Transformers series, some still dealing with the aftermath of Combiner Wars - such as the preview below, for the one-shot Combiner Hunters (which helped give the SDCC set its deco), featuring art by Sara Pitre-Durocher! Read more right here, and head back for a review on Wednesday, as the book makes its way to comic shops and online.

Transformers: Combiner Hunters Special one-shot
Mairghread Scott (w) • Sara Pitre-Durocher (a) • Casey W. Coller (c)
COMBINER WARS FALLOUT! Because you demanded it—WINDBLADE and CHROMIA team up with ARCEE to put an end to the menace of the COMBINER WARS—but will they end each other first?!
FC • 32 pages • $3.99

Synopsis
COMBINER WARS FALLOUT! Because you demanded it—WINDBLADE and CHROMIA team up with ARCEE to put an end to the menace of the COMBINER WARS—but will they end each other first?!

The one-shot that unofficially accompanies the SDCC exclusive Combiner Hunters box set, obviously sharing its title, is also the first introduction, and so far only look at, the team of character that form and become Victorion, the first all-female Transformer combiner - and you can sort of place it during the Combiner Wars arc, between Windblade #3 and The Transformers #42. If you want.

And some more Chromehide, obvs

Mairghread Scott takes the helm in this insert issue, really, dealing with some not entirely consequential events (as the title unfortunately might suggest) in terms of the overall narrative - for now, at least - and at the same time, some very well-placed exchanges between the main characters of Arcee, Chromia and Windblade.

Specifically, Arcee's reaction to Victorion's appearance/arrival. One panel in particular, which I will not spoil here, makes clever use of her IDW backstory to explain and give an actual, good reason to resist Combiners in general, and actually side with Galvatron on the issue (see The Transformers series), and furthers her development with another big step.

Of course, not to be forgotten, are the Camien team of Torchbearers, their added piece to the combiner puzzle, and how they deal with the sudden change in their team dynamic - though with not enough time to develop some seriously intriguing stories that emerge from the experience. I do hope we see a lot more of Victorion and her individual components, there is much more to say.

Sara Pitre-Durocher, whom we have only seen up to this point working on some pretty well-received cover variants, is the artist for the issue - and her work is absolutely magnificent, and definitely the highest of highlights of the book. Her expressions and proportions, her poses and layouts, the interactions of the characters are stunning. Truly.

In addition, the way that her line-work and Yamaishi's colours blend so effortlessly, really helps convey the feeling of the general atmosphere of the Sea of Rust, and the lighter pause between the phases of the Combiner Wars. There's the sense of something lifting from the heavy reality of the duties of the characters involved, especially as the story progresses.

Something which is also helped by Tom B. Long's lettering work, as he gives some added voices to the characters varying in sizes, tones, volume and size (again). And he creates a great title page. We also get a slew of cover variants, including the sizable main Casey Coller/Joana Lafuente one seen in the preview, the futuristic Livio Ramondelli B cover, the SDCC Pitre-Durocher exclusive, and the excellently apt James Biggie Pan Cybertronian Spaceways incentive in the thumbnail.

Whatever else this one-shot is doing, it's with no doubt a promotional comic to accompany both the Victorion reveal and the Combiner Hunters Arcee, Chromia and Windblade. And that feels like a bit of a shame, really. I am confident that we will revisit the events at some point in Till All Are One (probably), but right now.. it just sort of happened. Which is unfortunate, given its title.

That said, some of its scenes were really well-thought and executed by Scott, and what does happen is well done, well drawn, well coloured by Pitre-Durocher and Yamaishi - if anything, overall, I am definitely looking forward to future collaborations between the two, as they clearly work well in synergy, and a freer hand at the plot should yield much higher results!

Jeen0808 wrote:Anyone else feel this could've done with a few extra pages? Felt a bit rushed at times.

Yeah, both this one and Windblade feel like they were written for the 22 page format and had to be trimmed down to 20. Or 24 to 22, or whatever they just changed from to whatever it is now.

Honestly their work's good enough that I wish they'd just keep the old, higher page count. I'd give them the $1 Marvel book tax for it - Marvel certainly hasn't earned it but I keep buying their Star Wars books like a lemming.
Re: IDW Transformers: Combiner Hunters One-Shot Full Preview (1714288)
Posted by Optimizzy on July 29th, 2015 @ 10:46am CDT
It felt very rushed to me. There was no build up. Events just seemed to happen

The art was awesome and cool, and I like some story elements (like painting the badgeless as people). I did not like how they introduced Victorion. I was intrigued by the characters and wanted more but felt like they were just thrown in.

In all, it really felt like the comics we used to get in Armada toys, like the JaAm comic.
Re: IDW Transformers: Combiner Hunters One-Shot Full Preview (1714336)
Posted by D-Maximal_Primal on July 29th, 2015 @ 1:51pm CDT
Yeah, as a one-shot, it could have used a second half or be twice as long like the annuals were. but overall, I liked it. and it gives Optimus a combiner to command considering most camiens worship him

I guess if you really like femmebots this is the issue for you, but I really was expecting more of these three leads than I got.
Re: IDW Transformers: Combiner Hunters One-Shot Full Preview (1714519)
Posted by MrBlack on July 30th, 2015 @ 9:22am CDT
The art was very nice, and the story was pretty good considering it was nothing more than a 20-page toy ad. The issue is jarring just because so many aspects of the story came out of nowhere (Arcee on Cybertron, the introduction of the Torchbearers without any build-up), but there are some good character moments sprinkled in (Arcee's lingering frustration over her forcible gender reassignment, the brief moment between the two copter-bots).

I think this issue may sit better with me if the story beats introduced here are followed up on. Right now, it's just too much too fast.
Re: IDW Transformers: Combiner Hunters One-Shot Full Preview (1714528)
Posted by Nemesis Maximo on July 30th, 2015 @ 10:38am CDT
I was pretty disappointed by the isse. I thought it had Scott's usual decent writing, I really enjoyed the art (Sara Whose-last-name-I-will-butcher-in-my-partially-inebriated-state, has a great style reminiscent enough of Sarah Stone yet still with her own distinction, unlike Corrin Howell), and it seemed to be going to cool places; but then it just ends.
Re: IDW Transformers: Combiner Hunters One-Shot Full Preview (1715527)
Posted by D-Maximal_Primal on August 3rd, 2015 @ 1:24pm CDT
they will do more with this, they have to. for the introduction that is was it was good. I personally cannot wait to hear more. As for the situation regarding Arcee: I have a feeling that will soon be explained. Lots of this should lead into "Till all are one"

Re: IDW Transformers: Combiner Hunters One-Shot Full Preview (1743585)
Posted by Va'al on November 22nd, 2015 @ 2:45am CST
Wondering how to read the Combiner Hunters one-shot, and where the tail end of volume two of Windblade will go (after the first three issues were part of the Combiner Wars trade)? Fear not, as we have indication from Amazon.com and a listing for April 2015 that they will all be included in IDW Transformers: Distant Stars (currently at $19.99). No cover yet, but take a look below for more info, and pre-order here.

After the events of COMBINER WARS, WINDBLADE and STARSCREAM race to recruit the lost CYBERTRONIAN colonies to the Council of Worlds-but which of them will control the fate of Cybertron? Collects issues #4-7 of the Windblade series and the Combiner Hunters One-Shot.

Re: IDW Transformers: Combiner Hunters One-Shot Full Preview (1746968)
Posted by Va'al on December 10th, 2015 @ 3:36am CST
We have an update on the Amazon.com listing for the trade paperback collecting Combiner Hunters and the latter end of Windblade volume 2 - Distant Stars - as we reported here. Most significantly, the cover art! Featuring the Camien cityspeaker by Naoto Tsushima and Jet Enter, originally a variant for issue #4 of the series. Check out the new lettering and original art below.

(Though post Combiner Wars there was a bit of hm.. slump.)

Honestly I wish I could care about the character more than I do nowadays. I'm just tired tof her being the center of these stories and not needing to be. I liked the first windblade miniseries when it came out and recently went back and reread it and just thought to myself, "wow...this really wasn't very good" it really did nothing in the form of giving her a character. The entire story was "Starscream is bad and we need to stop him! Oh wait! He actually didn't kill a bunch of people, it as my best friend! Grrr! Starscream is still bad! Shame on you Chromia but Grrr Starscream still needs to be stopped! Doing what exactly? I don't know know but he's bad"

That is Windblade volume 1 in a nutshell.

I get why we got the first volume. She's our character, we made her but one or two pages actually delved into her backstory and that's all. The two issues of MTMTE with nautica and firestar gave us more back story and characterization for Nautica than 2 volumes and multiple appearances in not-RID has done for Windblade and even Chromia(who is one of the worst written characters in IDW).

Volume 2 is a decent story if you don't look at it as Windblade Volume 2 because, while she's a POV character, that series really wasn't about her and shouldn't have been named after her. I really think it should have been a 4-6 issue series called "the Council of Worlds" I really hope "till all are one" is not just the Windblade series with a different name. Do it like the first 16 issues of RID where each issue has a narrative from a different character.

The way people felt about Drift when he first appeared is how I am feeling about Windblade anymore. "HERES WINDBLADE! HERES WINDBLADE! WHAT? YOU WANT HER WRITTEN WITH CHARACTER?! SHE HATES STARSCREAM! THERE YOU GO!"
Click here to view additional comments about this topic at the Energon Pub Forums ...