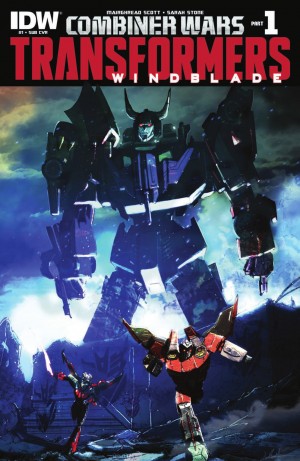 We have seen a tiny preview for this week's first issue of the returning Transformers: Windblade series, also serving as the second chapter of Combiner Wars - but how about another couple of pages to get some more hype up? Check them out below, and head back here to Seibertron.com for a review tomorrow!

Transformers: Windblade #1 (of 3)—Combiner Wars Part One—SPOTLIGHT
Mairghread Scott (w) • Sarah Stone (a) • Casey W. Coller (c)
THE WAR BEGINS! The first strike in COMBINER WARS is against WINDBLADE’S homeworld—and she’s not happy about it! Her long- lost CYBERTRONIAN colony is found… and the only thing that can protect it is SUPERION.
FC • 32 pages • $3.99

Bullet points:
The creative team from the first smash-hit WINDBLADE series returns!
WINDBLADE is the biggest new TRANSFORMERS character in years—don’t miss out!
All the drama and pathos of the original WINDBLADE series—plus more COMBINERS!
Variant Cover by Transformers game and toy artist Sara Pitre-Durocher!

That would be the polite way to put it, yes!

That would be the polite way to put it, yes!

You sir, have just made me guffaw.
Re: IDW Transformers: Combiner Wars Windblade #1 Full Preview (1666372)
Posted by D-Maximal_Primal on March 24th, 2015 @ 1:23pm CDT
Can't wait to read this.
The art is amazing (As I have repeatedly addressed), and I love Menasor's head and Hot Shot and Afterburners looks are beautiful.
finally, Damn you Menasor! Afterburner looked really cool! Superion is gonna kick your A$$!!

D-Mamus_Prime wrote:Can't wait to read this.
The art is amazing (As I have repeatedly addressed), and I love Menasor's head and Hot Shot and Afterburners looks are beautiful.
finally, Damn you Menasor! Afterburner looked really cool! Superion is gonna kick your A$$!!

Pssh, the hell you say!

D-Mamus_Prime wrote:Can't wait to read this.
The art is amazing (As I have repeatedly addressed), and I love Menasor's head and Hot Shot and Afterburners looks are beautiful.
finally, Damn you Menasor! Afterburner looked really cool! Superion is gonna kick your A$$!!

Pssh, the hell you say!

Aerialbots will grab stunticons,
CARRY them to outerspace,
And then drop them where they SHATTER WITH NO HOPE OF BEING PUT BACK IN PLACE!

It's G2 Afterburner.
Re: IDW Transformers: Combiner Wars Windblade #1 Full Preview (1666636)
Posted by Triptykon on March 25th, 2015 @ 12:03am CDT
Love that Swindle is inspired by his Transformers Animated iteration. Rewatched the final season of animated, and, while I didn't care much for it when the first season originally aired, it is now one of my favorite Transformers runs.

Been back collecting figures from this line, and kicking myself in the ass for not picking up Rodimus the only time I ever saw one at retail right after the show ended.

Maybe this year at Chicago Comic-Con I'll find one, last year I picked up Jetstorm and Jetfire. Love em.

Synopsis
THE WAR BEGINS! The first strike in COMBINER WARS is against WINDBLADE’S homeworld—and she’s not happy about it! Her long- lost CYBERTRONIAN colony is found… and the only thing that can protect it is SUPERION.

And of course, Alpha Bravo

Last week's Opening Salvo to Combiner Wars highlighted the major players and stages for the IDW event to take place, but it's with the first issue of a returning Windblade series (reuniting its creative team, if briefly) that the refuse really hits the propeller. And you can blame Swindle again, of course.

Mairghread Scott, one half of the plotting team behind the event with John Barber, takes the writing duties as seriously and as cruelly as she can, with death death rampage, death, destruction, no gardening, a bit more destruction and, on a different side altogether, talks of religion, diplomacy, incorporation and assimilation, politics and cultural differences - and makes both sides work really really well, if sometimes a little disjointed due to two worlds almost literally clashing.

Swindle is still pretty glorious all the way through this issue too, though the spotlight goes to Windblade unsurprisingly, and her political, diplomatic (with an edge) skills as a Camien and a Cityspeaker - as opposed to the machinations of Starscream or war-like leadership of Optimus Prime. The interactions and moments that the three have are wonderful, and at times smirk-inducing, as a result.

And some dynamics never really die

What the issues offers, then, other than some mighty fine scenes of destruction and good old fashioned imperial foreign policy, is a glimpse into how different strands of continuities are addressed as belief systems, how ex-Cybertronian societies have evolved very differently from their original soil, and how all of that, right now, holds a trepidantly unexpected set of consequences.

Sarah Stone returns to interiors, too, and shows off some more lovely digital artwork, spreads, splashes, body language and physical/facial interactions corresponding and developing Scott's script ever so marvellously. Especially with the foregrounded characters, new Camien introductions and Starscream's undying quest for the perfectly suited chassis befitting his own ego.

We had seen Stone's amazing work on chases and landscape type panels, and we are now also treated to bigger scale creatures that are not hanging from rafters in repair workshops - and the interactions between the big brutes. Coupled with some trademark contrasting chromatic effects, highlighting key moments in fights and heated exchanges.

If at times, especially in the second half of the book, you might feel a little dazzled by the locations, Tom B. Long's letters are a godsend (heh), identifying not only voices but pinpointing the scenes with needed, fontastic accuracy. A slew of covers also allows to cover the multiplicity of worlds we're encountering, slowly, from the Travis Sengaus/Josh Burcham Devastator retailer variant, the Casey Coller/Joana Lafuente established Superion cover, Livio Ramondelli's poster Menasor - and the thumbnailed gorgeous Sara Pitre-Durocher Superion/Windblade variant.

There is a lot going on in this issue, even more than was the case in Opening Salvo. While it may not sit entirely well with some readers, the material Scott (with Barber) are covering is both established and a new take, new aspects and new introductions to the mythology, world-building and conventions of the until now Cybertron/Earth axis - with minor detours - of the Transformers fiction, thanks to the Way of the Flame and its repercussions among the governing side of Caminus. And it works, for this reviewer.

It is really good to see more Sarah Stone artwork too, and the fight scenes look great - but much like the writing aspect of the issue, it's what is going on around the fighting that is really the crux of the story. And trust me, you want to get all the engines running on multiple franchise continuities with this one, and revisit and reassess some older pacts that were made in light of the ongoing ark arc.

Re: IDW Transformers: Combiner Wars Windblade #1 Full Preview (1666694)
Posted by TimothyR on March 25th, 2015 @ 6:29am CDT
the next panel after the shot of the jets in pursuit should show how ridiculously far behind alpha bravo is, and showing how he's incapable of catching up with the jets.

then, they should murder him and bring slingshot back.
Re: IDW Transformers: Combiner Wars Windblade #1 Full Preview (1666695)
Posted by Ironhidensh on March 25th, 2015 @ 6:31am CDT
I see that Starscream is going to get the Jetfire toy mold. How sad.

TimothyR wrote:the next panel after the shot of the jets in pursuit should show how ridiculously far behind alpha bravo is, and showing how he's incapable of catching up with the jets.

then, they should murder him and bring slingshot back.

It's good stuff. Enjoying your reviews as always Vaal. The Blackjack and Starscream interactions confuse me slightly... But I think I get the gist of it, and if so... Stupid, Starscream just have to continuously stir the pot. I wonder if he is bored because of actually achieving his goal of being ruler. Trying to strengthen his power base I suppose. I don't know how nobody has taken him out yet...I guess people/Cybertronians must like him better than I do.
Click here to view additional comments about this topic at the Energon Pub Forums ...