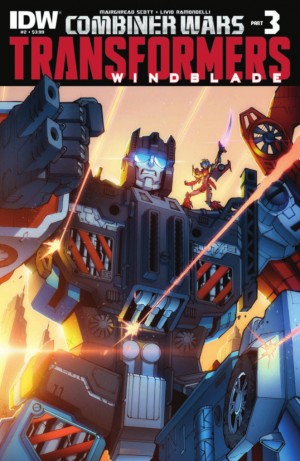 Looking for your weekly fill of Transformers comics? IDW Publishing has you covered, with the third chapter in the Combiner Wars event taking place in the pages of Windblade #2! Check out a full preview below, and head back here to Seibertron.com on the day of release to keep the discussion going with our own review.

Transformers: Windblade—Combiner Wars #2
Mairghread Scott (w) • Livio Ramondelli (a) • Casey W. Coller (c)
PROWL makes his move… and the galaxy will never be the same. Can WINDBLADE stand against the threat of the COMBINERS?
FC • 32 pages • $3.99

Is it too late to spot typos? And wonder why a name-check for Fixit is accompanied by a closeup of First Aid?

Not that I'm knocking it - truth is I'm stoked.
Re: IDW Transformers: Combiner Wars - Windblade #2 (1677411)
Posted by Shuttershock on April 21st, 2015 @ 9:36am CDT
Anyone else think it's kind of sketchy how Optimus allows the Camians to perceive him as a god just to take power away from Starscream?

Shuttershock wrote:Anyone else think it's kind of sketchy how Optimus allows the Camians to perceive him as a god just to take power away from Starscream?

It's worse than that. He's not just taking Power away from Starscream, but he's using the Camian religion as a way to insert himself into the power structure that he can keep Starscream in check.
Re: IDW Transformers: Combiner Wars - Windblade #2 (1677679)
Posted by Shuttershock on April 21st, 2015 @ 10:58pm CDT

Shuttershock wrote:Anyone else think it's kind of sketchy how Optimus allows the Camians to perceive him as a god just to take power away from Starscream?

It's worse than that. He's not just taking Power away from Starscream, but he's using the Camian religion as a way to insert himself into the power structure that he can keep Starscream in check.

That Bot wrote:Rattrap needs to blow the whistle on Starscream's operations and let Optimus or somebody else run for president of Cybertron.

That Bot wrote:Optimus is supposed to be the one that bows to the will of the people. That's why he left Cybertron in the first place and why he's trying not to tell Starscream how to do his job.
Of course 4 million years of being in charge makes it hard to stop giving orders.

Synopsis
PROWL makes his move… and the galaxy will never be the same. Can WINDBLADE stand against the threat of the COMBINERS?

Close in its release to the previous chapter in Combiner Wars, taking place in The Transformers #40, Windblade #2 continues the event, by letting the story by Mairghread Scott and John Barber slide back over the table to Scott for the actual writing of the issue - where does it fare, you might ask? Read on below to find out.

Scott does her usual dialogue wonders, playing with the different characters' voices throughout the text, and airing some of the hang-ons from previous stories, especially with Ironhide and Chromia (and the Tankors). Starscream seems to shine even more in his machinations, but it's the combiners that get a lot of the scene - and their fights are not just physical.

On the other hand, there are some concerning issues taking place in the book, mostly from either script mistakes or editorial oversights, not only very early on in the book (First Aid becoming Fix-It briefly, for example; a number of typos) - I'm not keen on pointing out minor slips by Scott or Guzman, but there are quite a few scattered throughout, which should be caught by the time the trade comes out.

Nonetheless, even with the rushed feeling of some of the pages of the issue, the dialogue works well and there are some sensationally silly, but fist-pumping moments in the fights between combiners - wth Devastator finally entering the main stage, and the introduction of even more to the mix - that just I mean I just go read them, they're bonkers, fun and twistedly light-hearted.

The artwork duties are still down to Livio Ramondelli, keeping the engine running for yet another issue of Combiner Wars - and there are some really good things being done for it. There are some great facial expression moments, the characters all get their needed gravitas, and Starscream is as pissed off as ever. There are even channellings of Sarah Stone's redeveloped design for some characters.

That there's a noice Ironhide

Much of the problems with this issue, unfortunately, also comes down to what the artwork doesn't do quite right. There are panels in which characters seem to switch for no apparent reason, especially among the Protectobots. Some of the Superion fight scenes have limbs appearing and reappearing without explanation or shown process, and when it's shown (in one panel/sequence) it takes a while to identify.

The lettering, on the third hand, does not present any difficulties or confusing sequences as last issues, and actually, Tom B. Long has a lot of fun with sound effects during the fight scenes - the many fight scenes - and the multiple voices that Scott's script develops for the characters. The covers once again lack the Hasbro Marcelo Matere credit for the (thumbnailed) RI variant, but still deliver on their quality, with the truly menacing Devastator poster variant by Ramondelli, and the Casey Coller/Joana Lafuente Defensor spotlight.

The smattering of mistakes in script and artwork unfortunately hinder the full enjoyment of this chapter of Combiner Wars, and gives it too much of a rushed feeling to satisfy long-time readers and invested fans. However, while they do distract, they do not take away from what it does really really well, in both writing and visuals, as I hope I've showed above.

What the issue works well with is the interactions, both verbal and physical, both aggressive and positive, and between Camiens and Cybertronians, Autobots and Decepticons and all the various cogs in the machine that is becoming the beginning of a new universe-wide ..well, universe. Glamorous assistant ScottyP aptly comments that this is an almost entry-level comic for people buying the new toys, and it does more than enough to hook people in for the longer ride.

I feel I should now be a fan of Rook, as well as Alpha Bravo.

1984forever wrote:Yes, the art could be better... but this is hands down the BEST Transformers IDW has ever produced! It actually deserves 4 and a half symbols, not 3.

I wholeheartedly disagree. This was a clumsily written and plotted issue and, as Va'al hints toward, I think its partially because the whole thing is a Hasbro-sponsored advertisement.

Thankfully MTMTE isn't being drawn into the mess...
Props to Scott and Barber for taking the bullet on this one.

Ironhidensh wrote:I feel Prowlestator went down too easy. I'm not fond of the "magic make you combine" laser. I guess it all just feels too rushed. I have a feeling Hasbro is pulling strings, and the story is suffering for it.

I found that humorous, although I agree I don't want to see it happen too often. Develop the guys as a team and have some combiner growing pains.

So let's see, the combiner wars so far has Devastator, Menasor, Superion, and Defensor. Think Monstructor will show up to cause trouble? Will we see Ultra Prime or anybody else, do you think? Or is this it?
Re: IDW Transformers: Combiner Wars - Windblade #2 (1677987)
Posted by Nemesis Maximo on April 22nd, 2015 @ 4:19pm CDT
On one hand, I hope Monstructor shows up, because if he 's in the comics his chance of becoming a toy increases.

On the other hand, i feel like that would just bring up the Dead Universe again.
Re: IDW Transformers: Combiner Wars - Windblade #2 (1678111)
Posted by Crosscheck on April 22nd, 2015 @ 11:31pm CDT
I think it is a little weird we hardly ever see the Aerialbots, just Superion. It kinda makes the whole Alpha Bravo issue seem even more silly than it already was since we don't see the individual members. Hopefully that will be changed soon.

I must say that I don't really like that they are just having Starscream just using the Enigma willie-nillie. I would have liked a little more build-up to the Protectobots becoming Defensor. Hopefully the Combaticons will get something a little better than that.

I do like that Superion is demonstrating skills that the toy can actually do, such as transforming a leg into an arm to augment attacks. I bet the combiners all will make superb grapplers as a result of this.
Re: IDW Transformers: Combiner Wars - Windblade #2 (1678153)
Posted by Flashwave on April 23rd, 2015 @ 2:25am CDT
I feel very dissappointed in this.

One, its the art. Reminds me of slate, always has. Not my cup of tea.

Also, I really have no idea what's going on. We have a cool bit of world building within the council. And I like that bit with Optimus, reminds me of the scene from the HBO John Adams series where Adams, as Vice President, was to hold the tiebraker in Congress, only to discover that unless or until there was a tie to break, he had NOTHING to do and NO power. Then what, we have a ouching scene with Ironhide and Chromia, and then I get confused by the Combier Battle, which to me kinda sorta feels like It was thrust into this issue for Hasbro to sell toys, whereas if it were being done at IDW's pacing, which admittedly would not have worked so well with toy releases. I don't get Prowl's reasoning. It's Prowl, no one is supposed to get it. But this feels like Prowl just showed up to punch ReallyBigPeople(tm). And I don't see any strategy, let alone endgame.

I really feel like the Enignma of Combinatoric should have ended up on a planet of Omni-Combinational robots. But that's just me being fanboy. And as I recall, the timelines don't match up for that to work anyway. But was a thought.

Wait, Rook was in this issue?
Click here to view additional comments about this topic at the Energon Pub Forums ...