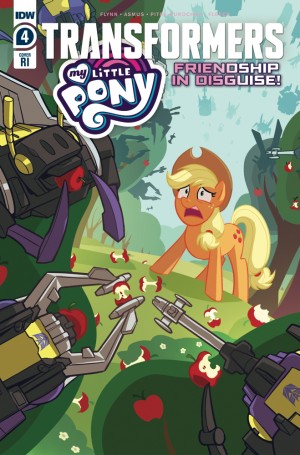 Our friends at IDW Publishing have distributed solicitation information for Transformers comics due out in May of this year (or later) and it looks to be a very busy month heading our way. A heavy dose of ponies, as expected due to earlier news that the limited series would be weekly, is accompanied by the latest chapter of the other limited crossover series Transformers vs The Terminator. Alongside that are the next installments of Transformers, Transformers: Galaxies and Transformers '84: Secrets and Lies with an unexpected appearance on at least one cover. Check out the information and some of the available covers below, though note many of them are 10-copy retailer incentive covers, meaning your local shop can only order one copy of that particular cover per 10 copies of the normal covers that they order.

Also be sure to keep reading past the Transformers solicitations for the trade paperback of the technically-not-but-pretty-much-is-in-the-old-Hasbro-Universe Rom: Dire Wraiths series, as well as a fascinating collector's item for fans of the classic Marvel Micronauts comic, initially licensed and made to support the Western release of some of the Microman toyline in 1979.

Transformers #21—Cover A: Casey W. Coller
Brian Ruckley (w) • Anna Malkova (a) • Casey W. Coller (c)
“Rise of the Decepticons” continues! There are certain members of the Rise that if captured by Security Operations, would be bad news for both sides. When a convoy of them are being moved from one secret base to another, the only thing that could set them off track is a massive groundquake... which means the geologic survey team looking into Cybertron’s recent seismic events is about to be outgunned and outmatched.
FC • 32 pages • $3.99 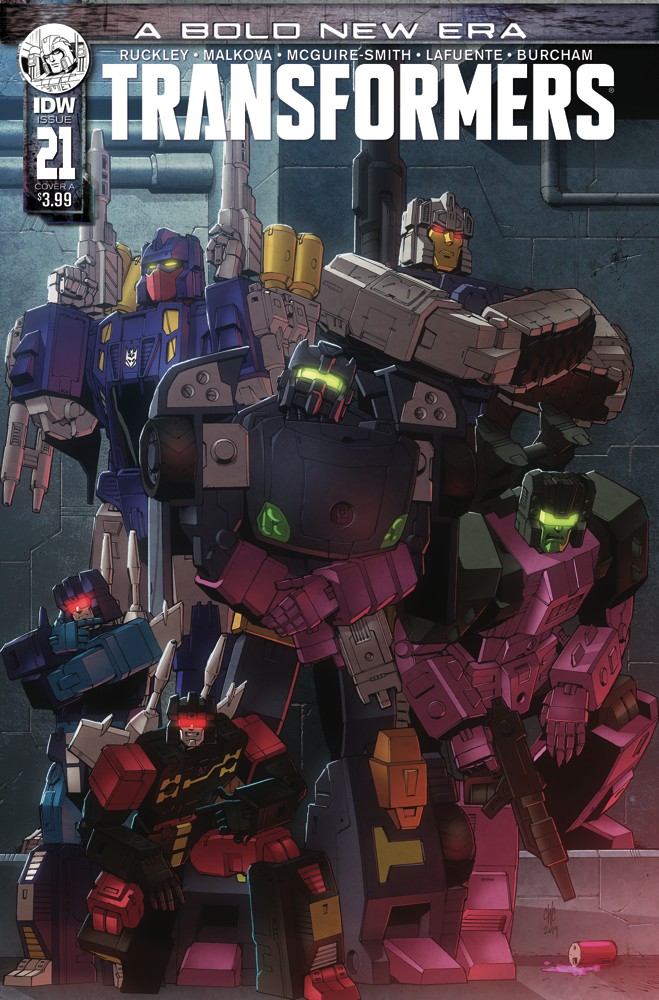 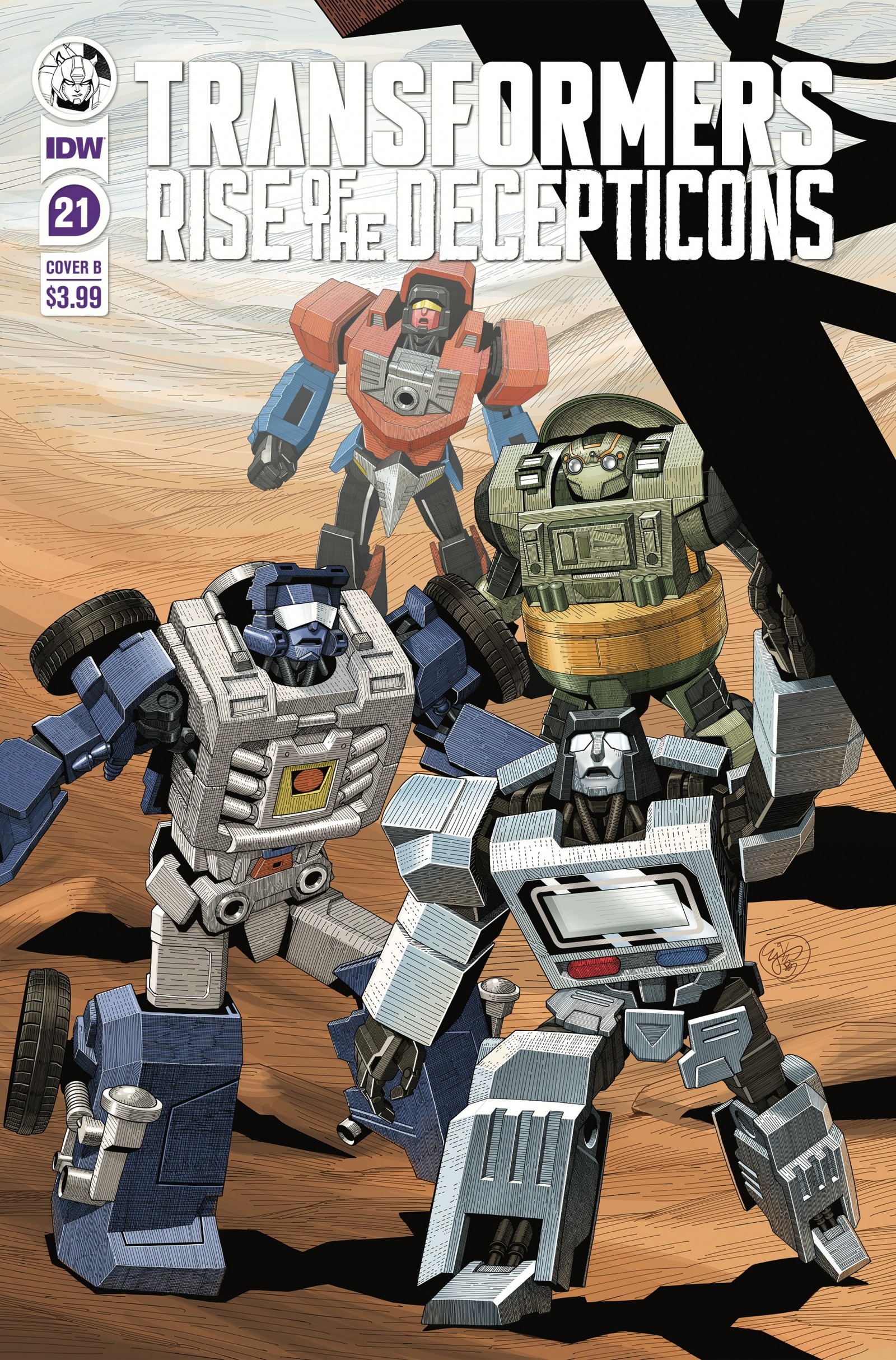 Transformers ‘84: Secrets and Lies #2 (of 4)—Cover A: Guido Guidi
Simon Furman (w) • Guido Guidi (a & c)
The time has come for the Autobots’ Ark to launch—their goal: to save Cybertron from an imminent asteroid belt and the maniacal mayhem of Megatron. The Decepticon warship, the Nemesis, falls into the Autobot trap, following the heroes into the void. But... when the Ark crashed to Earth, the Nemesis did not. What skeleton crew remained and what was their business on the strange alien world below? A gripping new tale about the secret history of the original Transformers comic universe, by the fantastic team of Simon Furman, Guido Guidi, and John-Paul Bove!
FC • 32 pages • $3.99 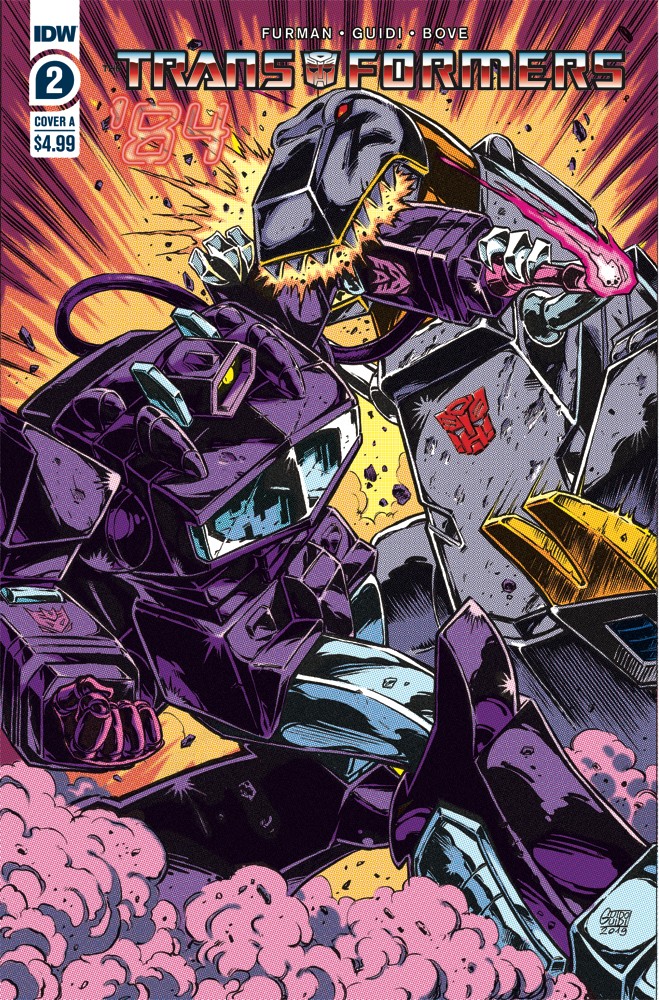 Transformers Galaxies #9—Cover A: Umi Miyao
Sam Maggs (w) • Bethany McGuire-Smith (a) • Umi Miyao ( c)
“Gauging the Truth,” Part Three! The Reversionists have a plan, a way to bring their world closer to purity and Primus. Arcee and Greenlight have a plan, to save the world from the Reversionist plan since it seems pretty drastic. Gauge has a decision to make: which side does she help?
FC • 32 pages • $3.99 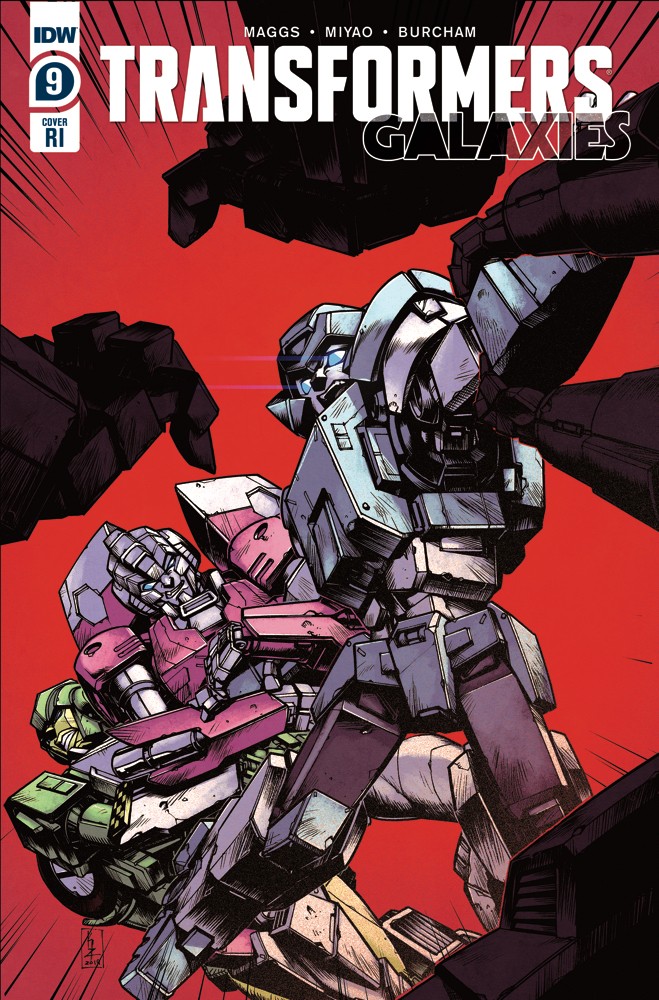 Pictured is the 10-copy retailer incentive cover by Kei Zama

FRIENDSHIP IN DISGUISE
Magical mayhem and mishaps ensue for the ponies and Autobots when Equestria and Cybertron collide!

My Little Pony/Transformers #1 (of 4)—GEM
James Asmus, Ian Flynn (w) • Tony Fleecs, Jack Lawrence (a) • Tony Fleecs (c)
When Queen Chrysalis casts a spell looking for more changelings, she accidentally interferes with a malfunctioning Spacebridge! What’s this mean for our favorite fillies? There are suddenly a bunch of Autobots and Decepticons in Equestria! And as the dust settles, Rarity and Arcee find themselves teaming up against a hostile Decepticon force...
FC • 32 pages • $3.99 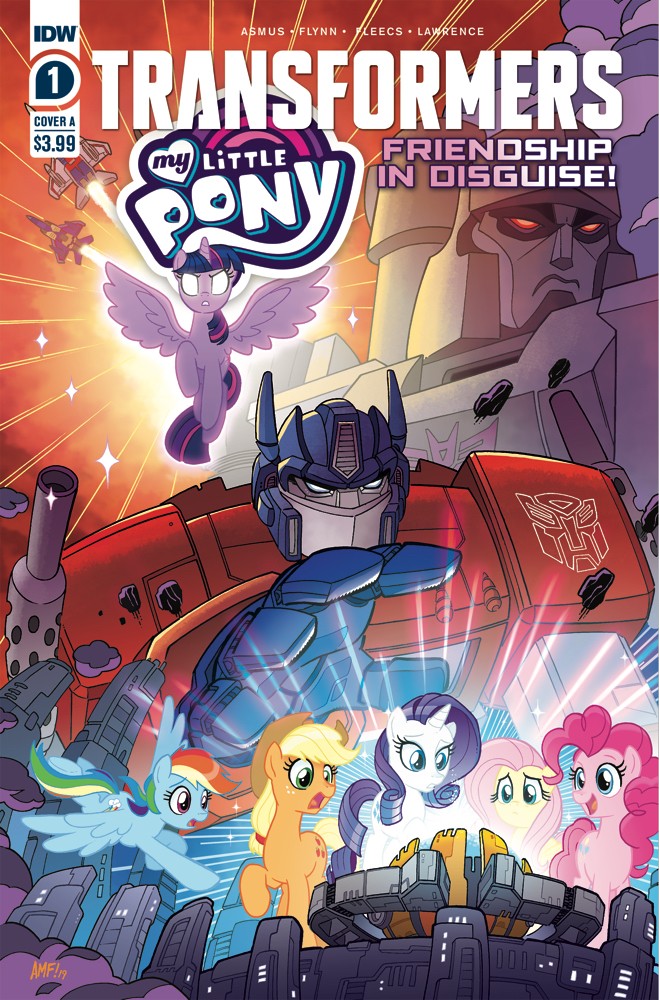 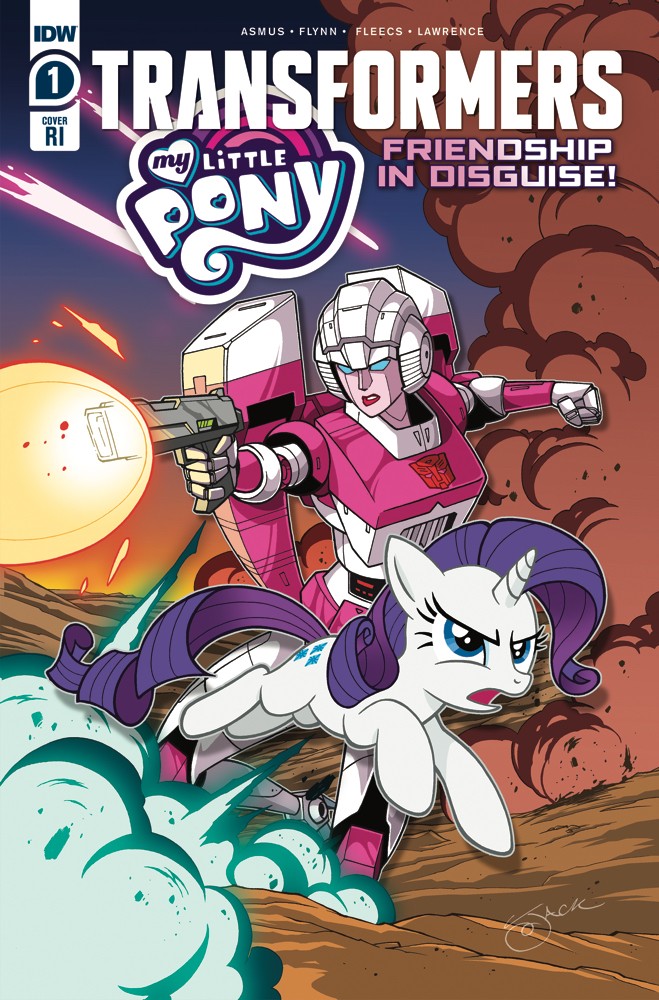 My Little Pony/Transformers #2 (of 4)—GEM
Ian Flynn, Sam Maggs (w) • Sara Pitre-Durocher, Casey W. Coller (a) • Tony Fleecs (c)
It’s Spike and Grimlock’s time to shine as they take on the Constructicons! Meanwhile, Pinkie Pie is determined to share as much knowledge about Equestrian and Cybertronian cuisine as possible with her new friends... which is why she invites Gauge to her kitchen for a live baking show! But things get a bit too spicy when Shockwave shows up.
FC • 32 pages • $3.99 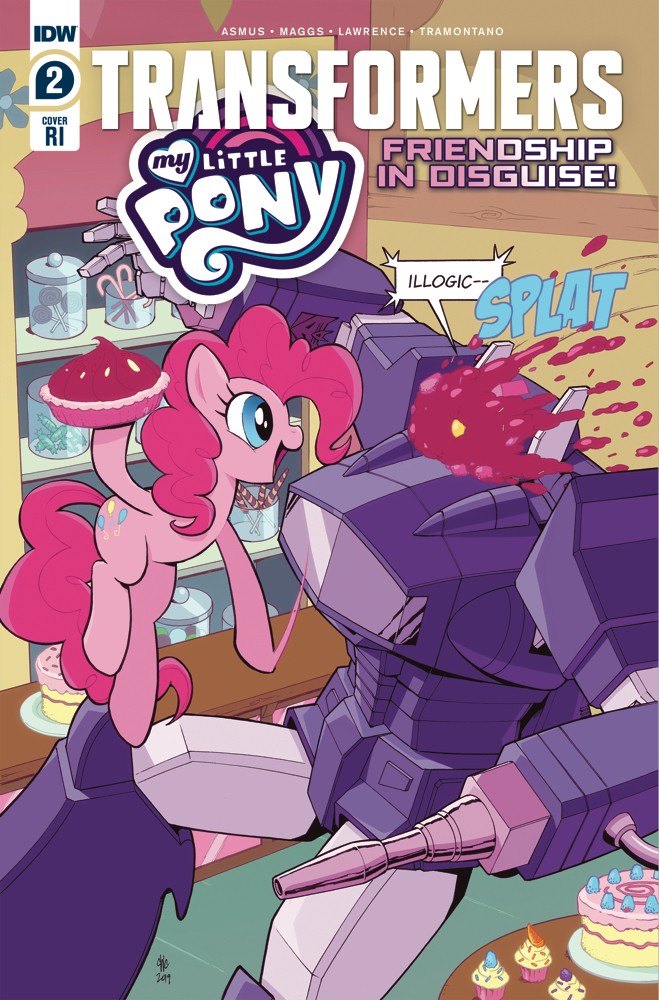 My Little Pony/Transformers #3 (of 4)—GEM
James Asmus, Sam Maggs (w) • Jack Lawrence, Priscilla Tramontano (a) • Tony Fleecs (c)
When Fluttershy and Discord’s tea time is interrupted by Soundwave, it’s robot logic vs. whimsical chaos! And Rainbow Dash, sure that she can fly faster than any Autobot can drive, finds herself in a race with the one and only Windblade—let’s just hope the Decepticons don’t make things too dangerous.
FC • 32 pages • $3.99 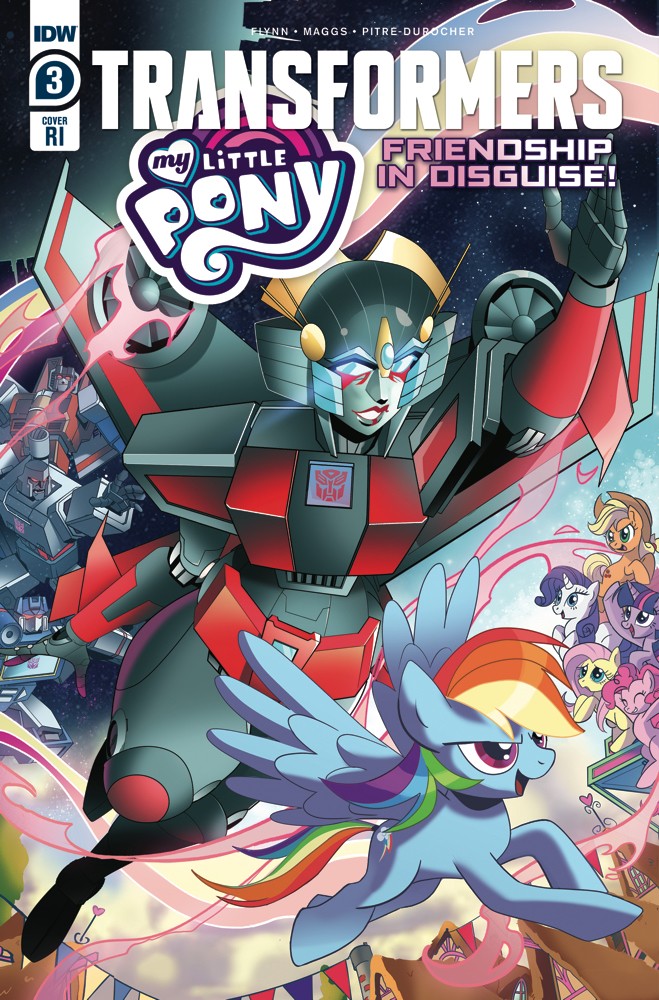 Pictured is the 10-copy retailer incentive cover by Priscilla Tramontano

My Little Pony/Transformers #4 (of 4)—GEM
Ian Flynn, James Asmus (w) • Sara Pitre-Durocher, Tony Fleecs (a) • Tony Fleecs (c)
When the Insecticons descend upon Sweet Apple Acres and begin devouring the Apple family’s crop, it’s up to Apple Jack and her family to rally to save the farm! Meanwhile, Optimus Prime and Twilight Sparkle finally band together the ponies and the Autobots to get things back to normal. The finale you’ve been waiting for is here!
FC • 32 pages • $3.99 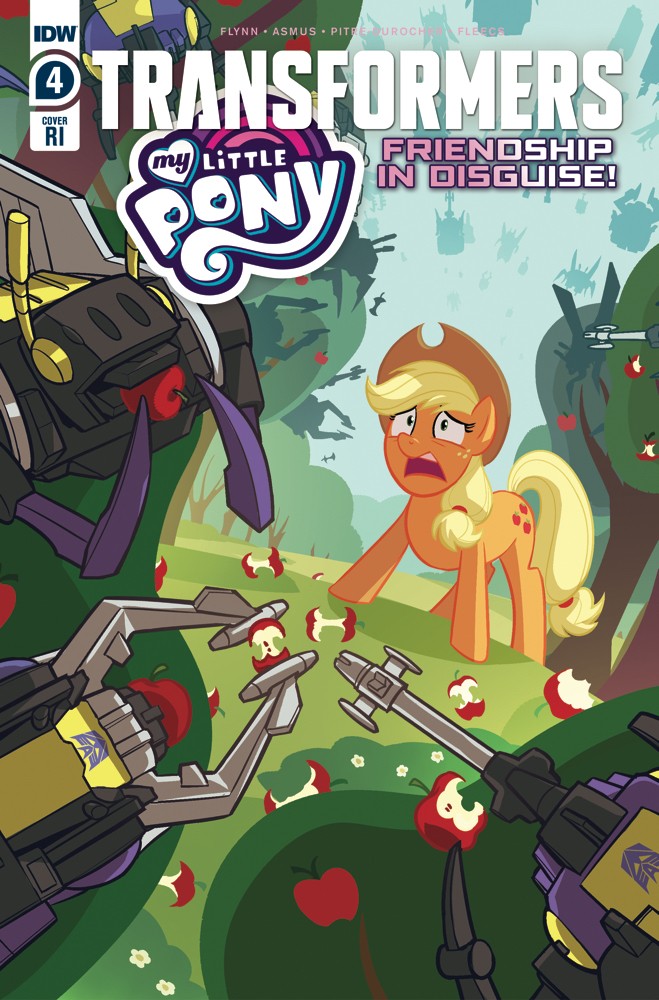 Transformers vs The Terminator #3 (of 4)—Cover A: Gavin Fullerton
David Mariotte, John Barber, & Tom Waltz (w) • Alex Milne (a) • Gavin Fullerton (c)
The T-800’s mission is simple: Exterminate the Cybertronians and ensure the future belongs to SKYNET. When Optimus Prime offers his aid, suggesting they go after Megatron together, the T-800 faces his toughest decision yet. Is the enemy of his enemy his friend, or just another threat to the mission?
FC • 32 pages • $3.99 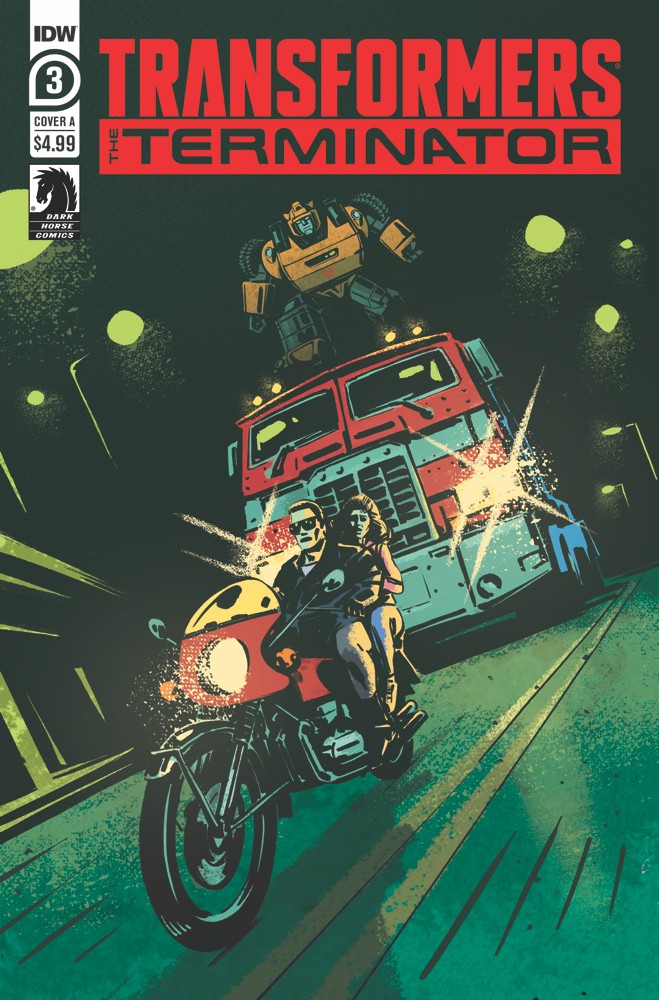 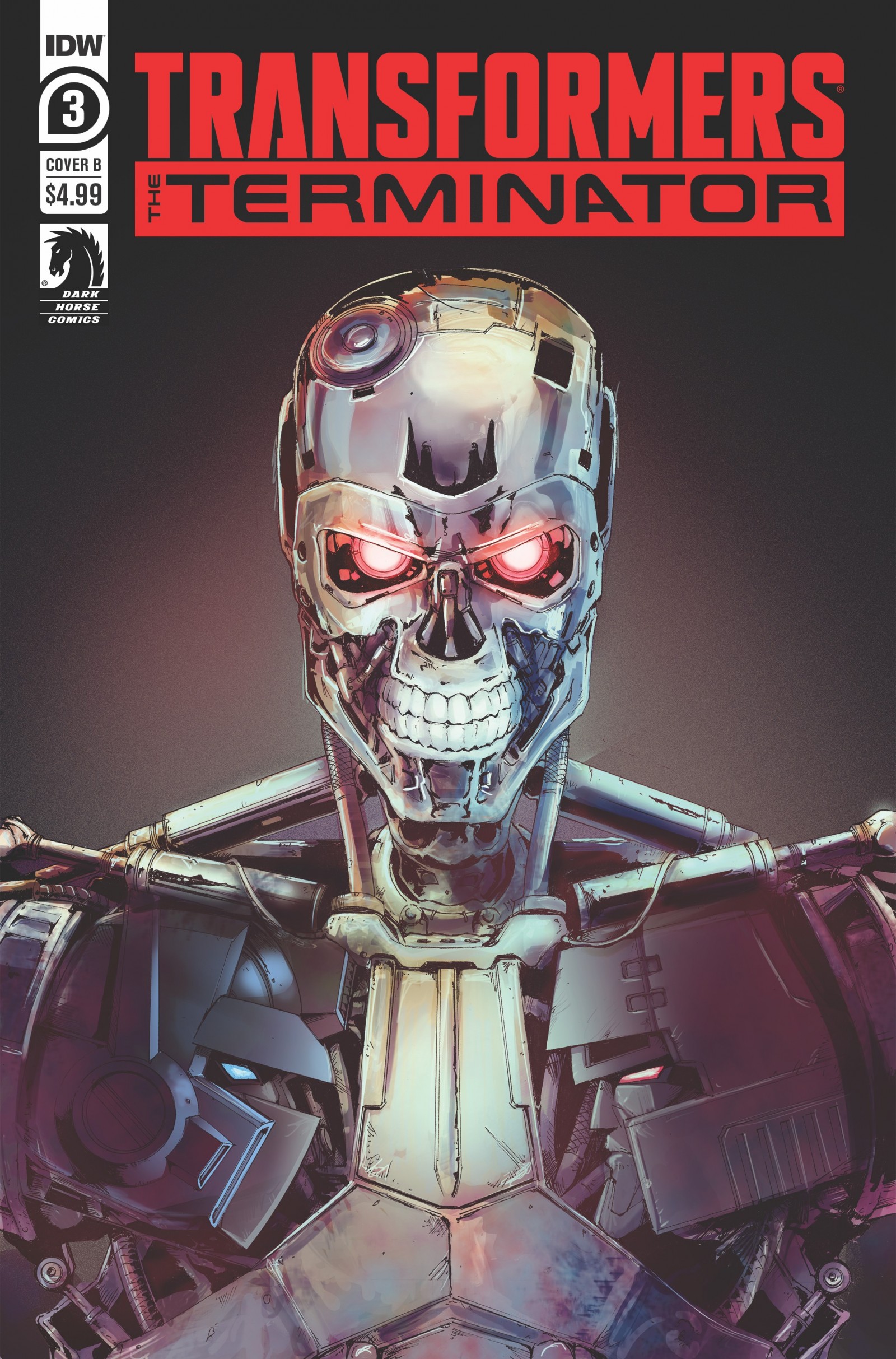 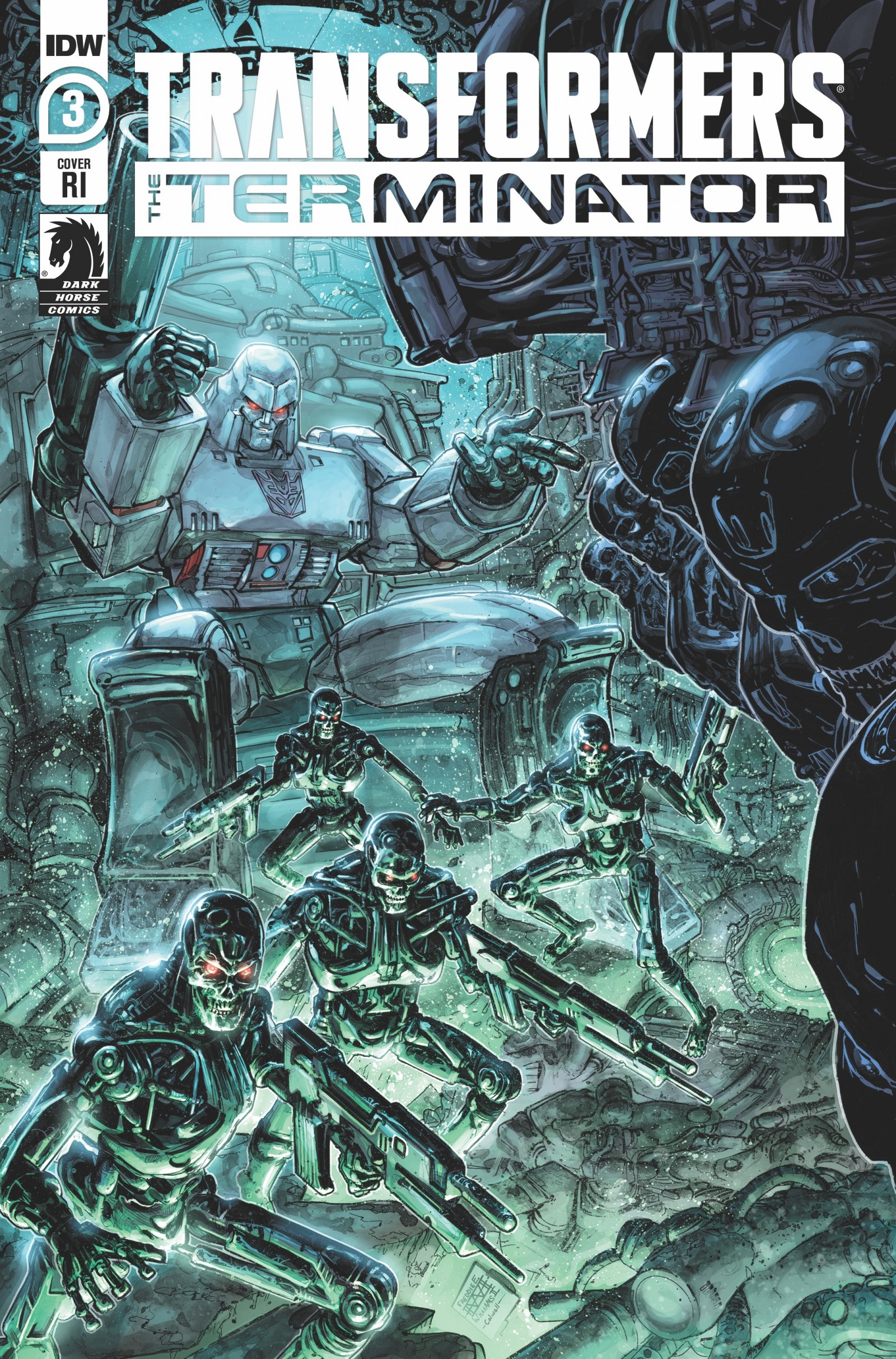 Seeking to conquer everything in their path, the Dire Wraiths wield powerful dark magics and can take over the bodies of other creatures shapeshifting into their hosts. The only thing powerful enough to oppose them is Rom the Spaceknight. But, with Rom nowhere in sight, can even the Adventure Team help prevent one giant leap for Dire Wraith-kind or is there no way to stop an invasion of Earth? Only the crew of Earth's first moon mission and some unexpected guest-stars stand in their way! Plus, a special back-up story with art by Guy Dorian, Sr. and Rom legend Sal Buscema! TPB • FC • $15.99 • 96 pages • ISBN: 978-1-68405-681-1
• AVAILABLE IN JULY 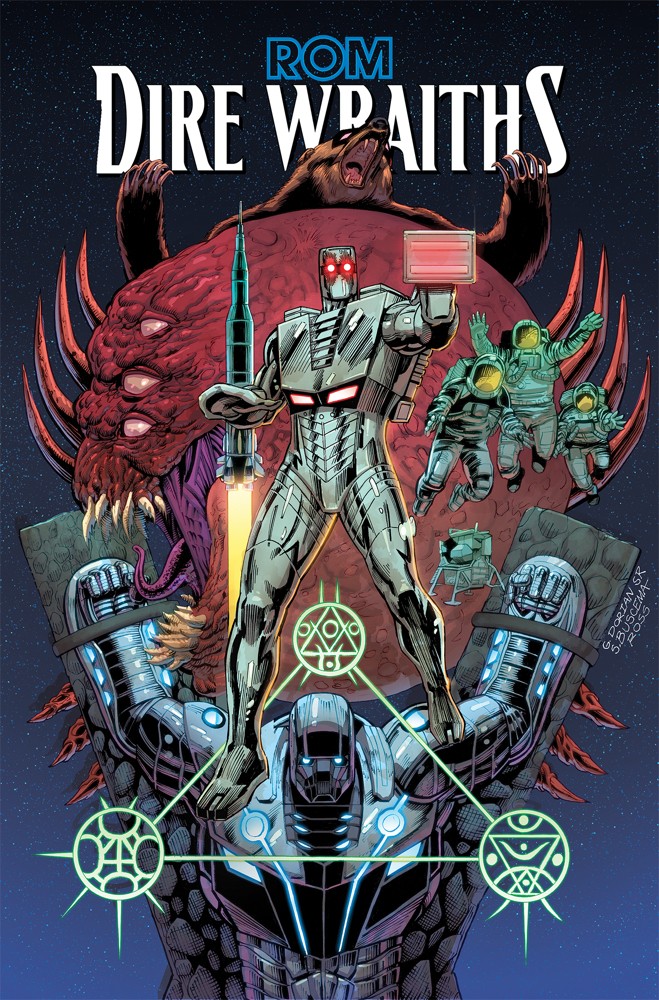 An Artist’s Edition showcases comic book original art in its most natural state, allowing the reader the opportunity to not only look at beautiful pages, but to also read the stories as well. It is the perfect opportunity for the true connoisseur of the form to experience art as never before. Each page has been meticulously scanned from the original art (in color, to show all the subtle nuances—blue pencil, white-out, staining—that make original art unique) and is presented at the same size they were drawn.

This gorgeous edition, prepared with the full cooperation of Michael Golden, will feature six complete issues—Micronauts #3, #7, #8, #9, #11, and #12! Plus, an incredible gallery section crammed full of story pages (something from each issue drawn by Golden), covers, pin ups and more—over 60 pages worth—making this the one book no Michael Golden fan can afford to miss!!

Bullet points:
• In print for the first time in 35 years! 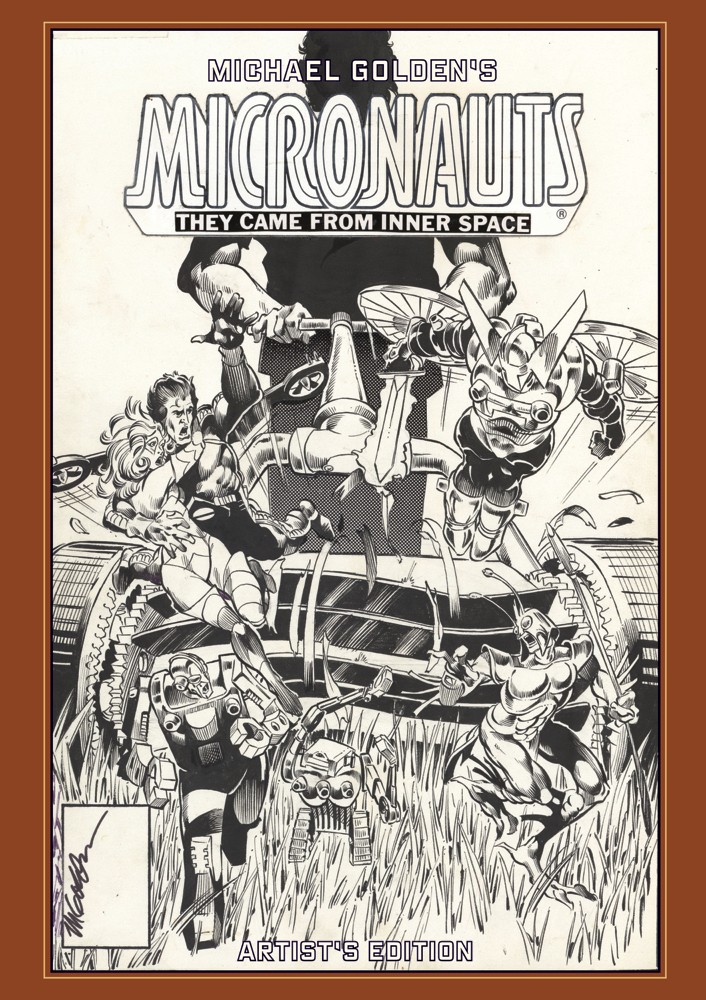 Re: IDW Transformers Comic Book Solicitations for May 2020 - Ponies and Rage (2053744)
Posted by D-Maximal_Primal on February 22nd, 2020 @ 4:18pm CST
That Transformers 84 stuff is the stuff i am most excited for at this point, it sounds really cool and interesting!

D-Maximal_Primal wrote:That Transformers 84 stuff is the stuff i am most excited for at this point, it sounds really cool and interesting!

Yes it seems like it will focus on those "lost" G1 stories that were only recalled or hinted at by certain characters. I particularly LOVE Guidi's art, so beautiful. I just hope they keep Geoff Senior away from this series.
Re: IDW Transformers Comic Book Solicitations for May 2020 - Ponies and Rage (2057610)
Posted by AcademyofDrX on March 23rd, 2020 @ 11:21pm CDT
Publication of all of these issues (and all May IDW comics) have been suspended by IDW due to coronavirus impacts.
https://www.idwpublishing.com/a-letter- ... e-officer/