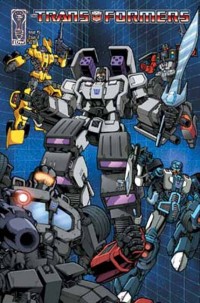 A new month calls for another round of Transformers Comics from the folks at IDW Publishing. They've updated their website with the release dates for their March comics. Among the ongoing trio of Transformers, Bumblebee, and Last Stand of the Wreckers - the Revenge of the Fallen sequel 'Nefarious' joins the ranks. Check out the release dates below. For previews of these comics, you can see them here. The release date article can be found over at the IDW Publshing website.