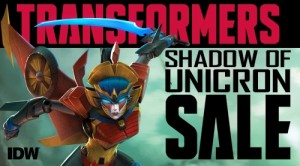 As was inevitable, and expected really, the arrival of the Unicron series from IDW Publishing's Transformers (and Hasbro) comics universe has also set off, with the end of the current narrative universe, another comics sale over on ComiXology.com!

Re: IDW Transformers Comics 'Shadow of Unicron' Sale on ComiXology.com (1979606)
Posted by Va'al on August 21st, 2018 @ 5:30am CDT
With the IDW Publishing Transformers: Unicron mini-series halfway through, and both ongoings Optimus Prime and Lost Light reaching their conclusion in the coming two months, we have a good opportunity to catch up thanks to comics subscription service comiXology!