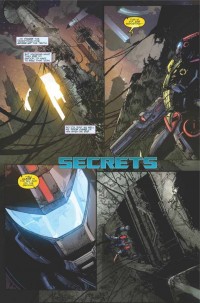 The official Transformers facebook page has posted a preview of IDW's digital Transformers: Fall of Cybertron #2 complete with commentary by John Barber. Enjoy the preview below.

PAGE 1- Following on from the last issue, we see what happened to Swoop when Grimlock sent him on a mission to find the source of the Decepticons energon supply. Why choose Swoop here and not another Dinobot?

JOHN BARBER: It made sense based on the set-up in the Fall of Cybertron game. (And presumably Swoop is kinda an ironic name at this point, given that he’s a tank). I wanted to switch things up here from the Grimlock focus of #1—still keeping Grimlock narrating, but giving Swoop here a moment to shine, briefly. I mean, we know things don’t go well for him, but I wanted to show that the Dinobot—well, at this point the Lightning Strike Coalition—are tough ’bots. They might get taken down, but not easily.

PAGE 2- Swoop continues to close in on the source of the energon. The mood here is very dark and moody. And lonesome. Was this a conscious choice to amplify just how harsh things could get for Swoop?

JOHN BARBER: Well, I wanted to give Dheeraj Verma a chance to tell the story. I wanted a relatively silent infiltration scene; something I don’t always do in the TRANSFORMERS: ROBOTS IN DISGUISE ongoing. There’s definitely supposed to be a feel of dread, of danger. I think Dheeraj did a great job in communicating that!

PAGE 3- Swoop investigates further as he hears two characters talking. Compared to the other Dinobots and their personalities, how did you go about writing Swoop for this mini-series?

JOHN BARBER: Well, at this point Swoop—and his teammates—are super-competent soldiers. They’re battle-hardened, but there’s something—I think—a little off-kilter with them when they’re actually full-on Dinobots. Here, Swoop’s a soldier engaging in an infiltration mission. He’s on the job, so his personality gets put away. As we’ll get a hint at later, he’s got a little sense of humor. But, basically, this is the job. This is the mission.

PAGE 4- Shockwave and Starscream talking about “secrets”. Having written for both of these characters in Robots in Disguise, what changes did you have to make for them for Fall of Cybertron? Presumably their relationship here is very different.

JOHN BARBER: Yeah, definitely. I mean, there’s a very specific set of circumstances going on in RID that sets these two guys up, and here, they’re both ostensibly serving Megatron. But there are certain fundamental qualities that cross all timelines… Shockwave’s logic; Starscream’s scheming. I definitely try to not think about the RID versions of the characters, while I’m writing these guys though. I really try to look at them as different characters with similar traits—but I’m sure there’s a bit of unintentional bleed-through.

It's Dheeraj Verma's art that undercuts Barber's writing here. The story is a solid Dinobot tale that respects the team as much as possible. I don't agree that Swoop's Alternate Mode should, at all, be a tank like his team-mates', especially since the game canon paints him as the truly "different" one (going so far as to make him the Autobot/Dinobot liaison), but is it important to remember that this is their game debut (no, the DS game did not count, and isn't true canon), so anything can fly (pun intended). Tank or not, I want to like Dheeraj's art, but it's times like this that I really miss Don Figueroa.

The real issue however is that this "series" is really one comic being split up into 8-page portions, spread out bi-weekly with enough advertising so that it wouldn't get largely ignored in the sea of recent Transformer stories; this will, in the end, be one of the most expensive (and condensed) one-shot comics in ever -- it will end up totaling to 50 pages at a total $6. And while it should be enjoyed like any other comic, it's important to know that beforehand.