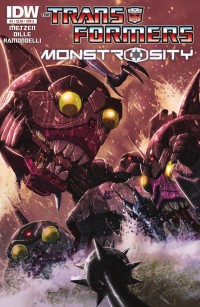 Our friends over at IDW have sent us a three page preview for the second print issue of the digital-first series Monstrosity. Check out the preview below, and don't forget to come back on Tuesday for the review, and pick up your copy in stores next Wednesday! MEGATRON—DEFEATED? Never! The DECEPTICON leader battles through SHARKTICON hordes, while on CYBERTRON, OPTIMUS PRIME struggles to unite his people—and GRIMLOCK and his rogue DINOBOTS go on a rampage!

We left the whole cast last issue in the middle of a refinery job, among Dynobots, Autobots, Decepticons and passer-bys. And Megatron being a 'really tough guy, no really, he's super bad-ass' on Junkion, with Pentius literally in tow. The cavalry, for once, arrives at the beginning

That's exactly where we start off again in this issue, very suddenly. All the plots, Megatron exluded, seem to clash together and work alongside each other in this second issue, which sees the Dynobots as catalyst for most of the events.

The Megatron plot is still developed, though only minimally, and I think the story benefits from the subsumed parallel storyline here - we get a much better luck at Optimus Prime's struggle with Cybertronian powers and bringing order back to the planet.

I wonder where this will go

The story definitely works better than the previous one, in my opinion, and I believe it's due to fewer Megatron scenes. The ones that are present seem to develop the character a little, rather than dump qualities on him, which is a definite welcome change.

I'm not sure I can find more to say about Ramondelli's work, in general, but this issue has highlighted some of his bigger strenghts. He works really really well with light/dark contrasts, vaguely organic-looking creatures and savage characters and landscapes. And there's some really good panel storytelling too.

How to use a white panel successfully

But my favourite part of the comic, I have to admit, is the lettering. Seriously, Tom B. Long's magic is ..magic. The work he does, especially with the soundwords, is incredible. I have never seen such beautiful KRA-KOOM, SHRONNG and GRAAING-KREENGs. So yes, aesthetically this issue really does shine (or not, as it's mostly dark to go with the tone), and the Ramondelli-Long pairing works really well, with the latter really building on the former's own colouring. And there's some big beasties that look quite beastly in there, too.

I enjoyed it a lot more than the previous one! The pacing works, the artwork is good, the lettering is amazing and it all blends in perfect synergy. I'm not sure what is so different from the previous issue, but it works.

I would suggest picking this one up, but you do need to have read the previous print issue for it to make any sense, due to its abrupt start. Issue 2 has definitely raised my expectations, and sets up what's to come in an intriguing way. Pleasantly surprised.