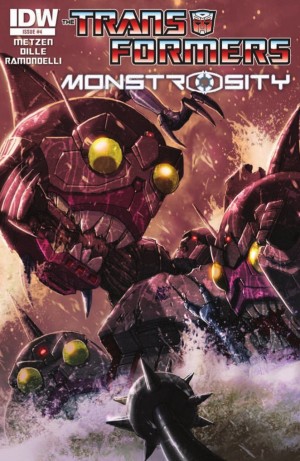 Thanks to our friends over at IDW, we are able to give a four page preview of the conclusive print issue for the digital-first series Transformers: Monstrosity! Check out the images below, and come back on Tuesday for our spoiler-free review.

Transformers: Monstrosity #4 (of 4)
Chris Metzen & Flint Dille (w) • Livio Ramondelli (a) • Ramondelli x 3 (c)
THE RETURN! In the early days of the war on CYBERTRON… MEGATRON’s journey into the abyss is over. OPTIMUS PRIME’s grip on the planet is slipping. GRIMLOCK and the DINOBOTS hold onto sanity by a thread. Now, all the threads draw together… and the world will shudder.
FC • 32 pages • $3.99

Bullet points:
First time in print!
The beginnings of the war on CYBERTRON! 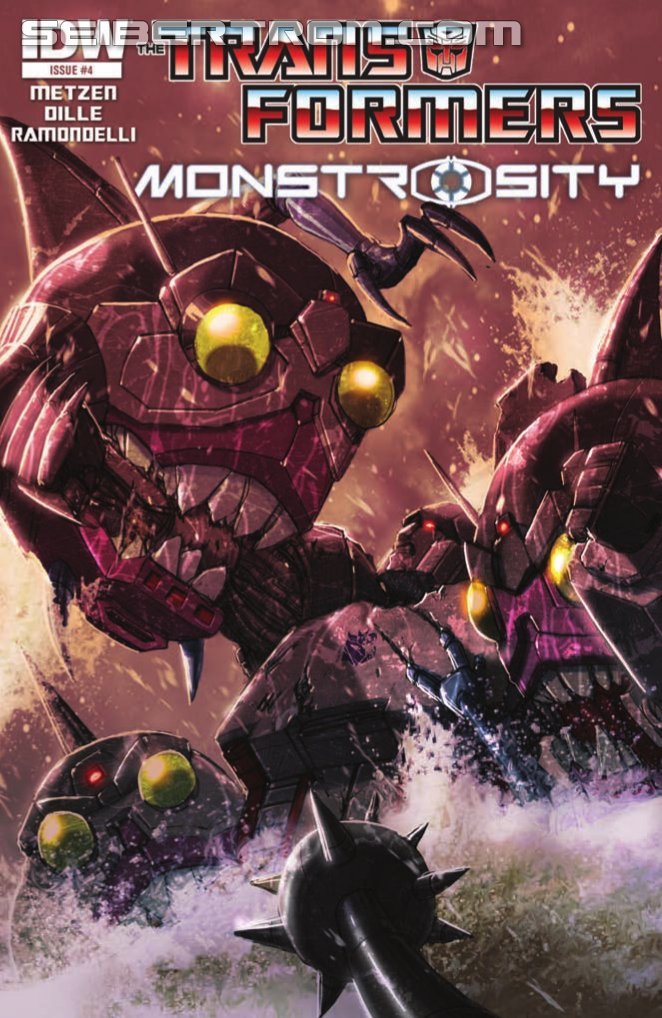 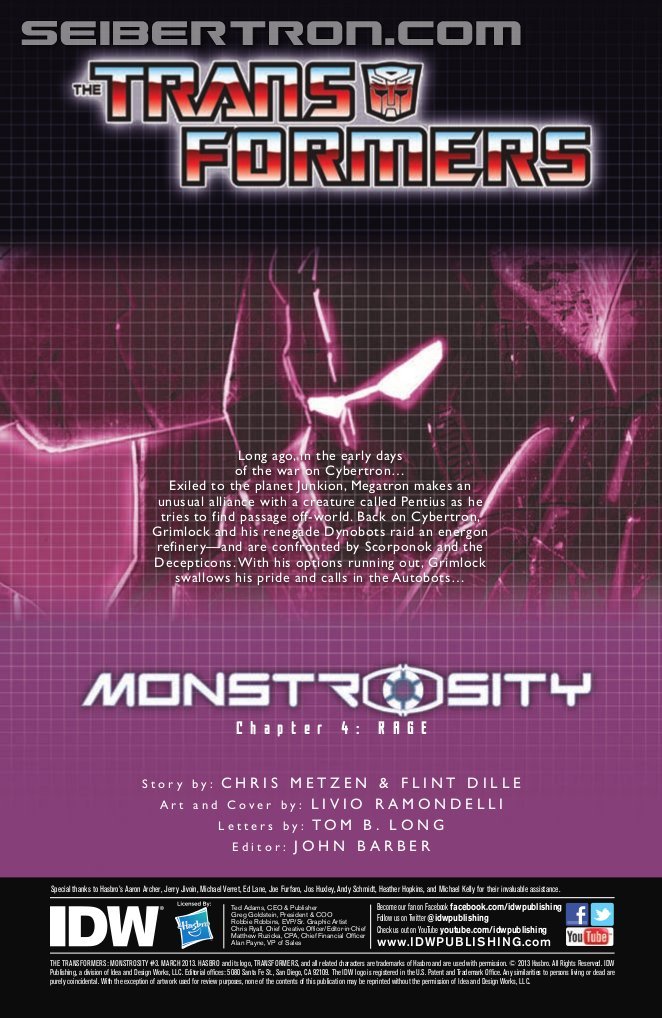 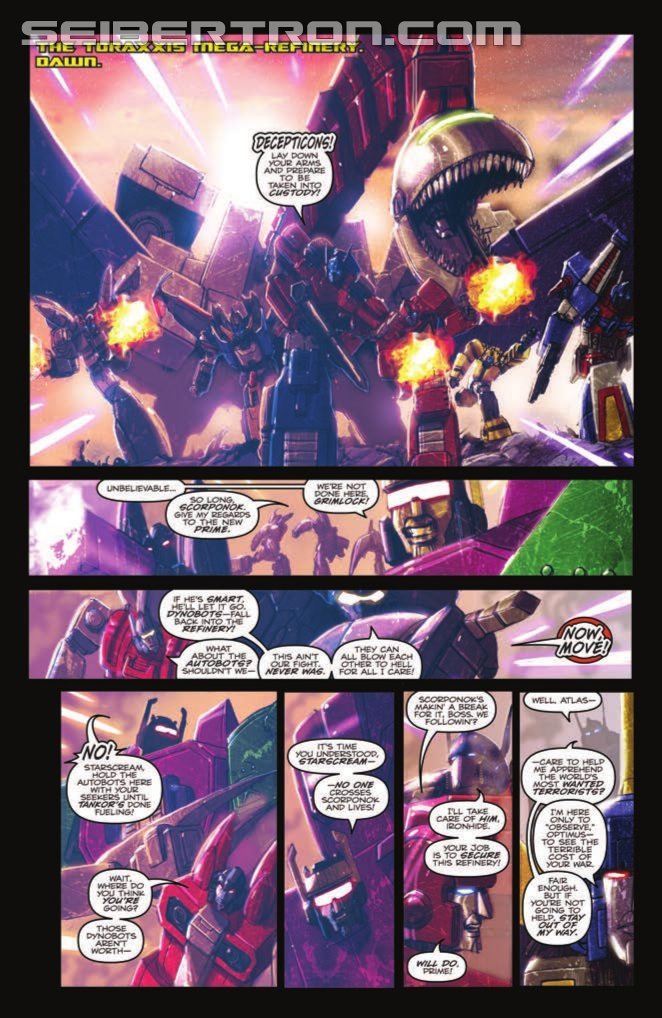 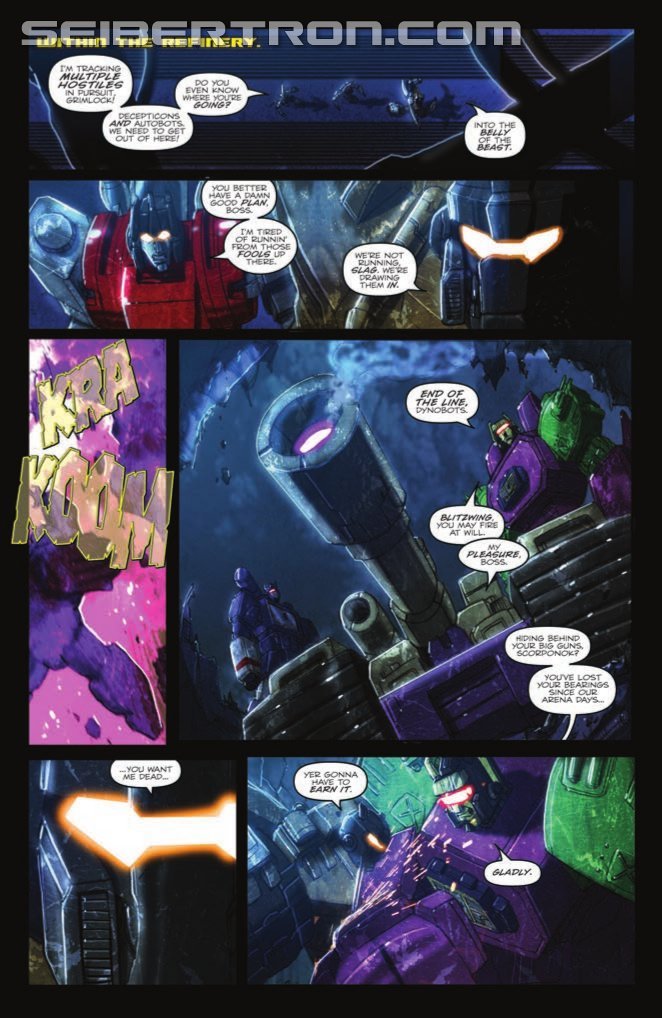 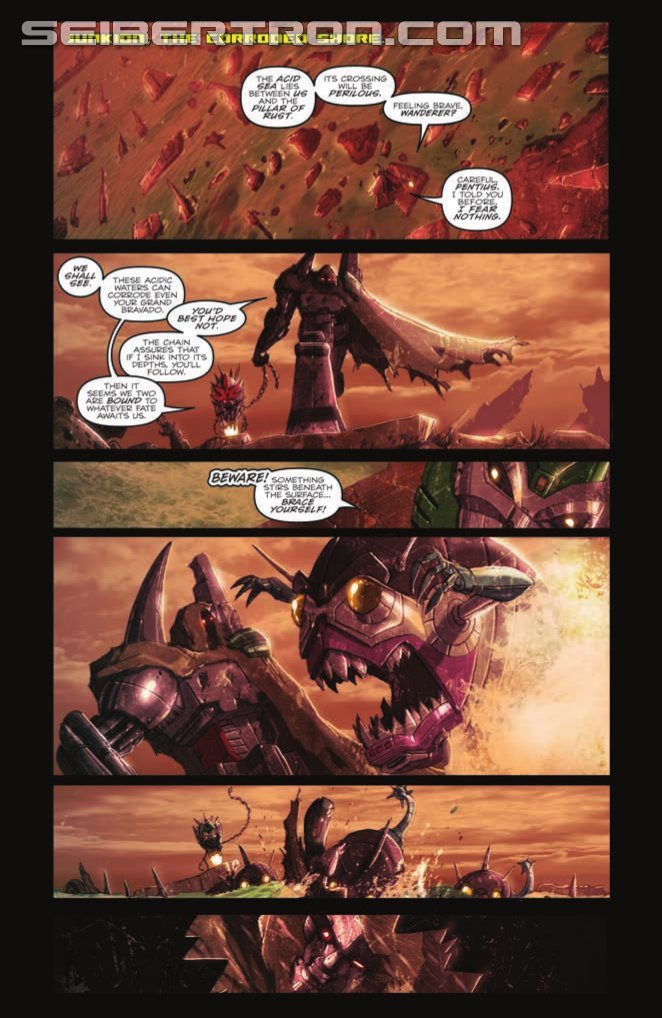 THE RETURN! In the early days of the war on CYBERTRON… MEGATRON’s journey into the abyss is over. OPTIMUS PRIME’s grip on the planet is slipping. GRIMLOCK and the DINOBOTS hold onto sanity by a thread. Now, all the threads draw together… and the world will shudder.

That's some good world-shuddering there

Story
The final issue, the end of the beginning, the beginning of the end. Monstrosity, the sequel to Autocracy, reaches its printed conclusion with this fourth issue - until the trade, that is. We were left with Megatron en route to Cybertron, Optimus moping and Scorponok unleashing the Kraken Trypticon from beneath the surface.

All the storylines do, in fact, finally merge, more or less successfully. After getting a minor roundup on the various plots. Optimus has another chance to mope, this time to different audiences, the Dynobots keep their word about helping out and Megatron gets to er.. have a chat with Scorponok.

And then they all have a giant 'let's smash the big bad bot' competition. Admittedly, the story is pretty thin, due to the giant cataclysm of action scenes taking more or less place around, under, above and even within Trypticon itself. But some of the interactions are still enjoyable.

See? The dialogue here is magnificent

As I said, the story is not highly convoluted or overly developed, but it does set up the scene nicely for some good prolonged action sequences and even addresses most of the issues raised in the other plotlines so far. Nice acknowledgement of The Guiding Hand's Mortilus, too.

Livio Ramondelli's work in this final issue is really pretty good, managing to distract readers from minor flaws with giant sweeping splash panels and pages. I've always maintained that Ramondelli really shines on big scaled scenes, action sequences and spreads - and the issue is full of them, so really a feast for the eyes! What is really impressive about the issue, though, is the collaboration between Ramondelli and Tom B. Long, the letterer. Some of the panel work is brilliantly creative, showing off the sheer scale of the character and the sounds it makes, and the ones of the action taking place around it.

How is that not genius?

So yes, definitely a good looking book, and makes up for concerns I've had on previous issues about Ramondelli's artwork and colouring. Long is still the letter magician I thought he was, but it's the product of the two artists working together that really makes some of the panels stand out here.

Once again, not the best story ever, with some interesting references to other aspects of the franchise and a little pandering to older fans (but that was expected, the writing team being who they are). The artwork picks up again this time round, and the scale and sound of the action is brilliantly executed in panels and lettering.

As a series, it's enjoyable enough to pick up the trade. Some of the plotlines are weaker than others, but the finale acts as a good counterpart to the lesser interactions between some of the characters. And if we had any doubts about a third chapter coming...