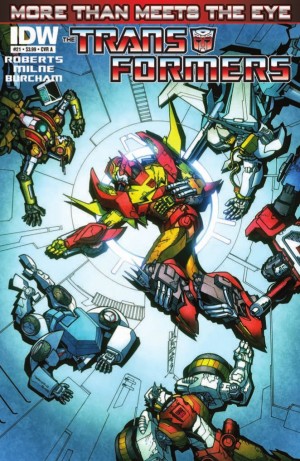 It's an eventful week for Transformers comics, and we have a grand total of three previews for you, thanks to our friends over at IDW! First up, the highly teased, awaited and anticipated MTMTE 21 - check it out below.

Transformers: More Than Meets the Eye #21
James Roberts (w) • Alex Milne (a) • Milne, Sean Chen (c)
ENDGAME! A handful of heroes stand in the way of a tyrant with the power to destroy AUTOBOTS and DECEPTICONS alike. But what if stopping him carries an even higher price? Get ready to say goodbye to some old friends as More Than Meets The Eye delivers on two years’ worth of promises.
FC • 32 pages • $3.99 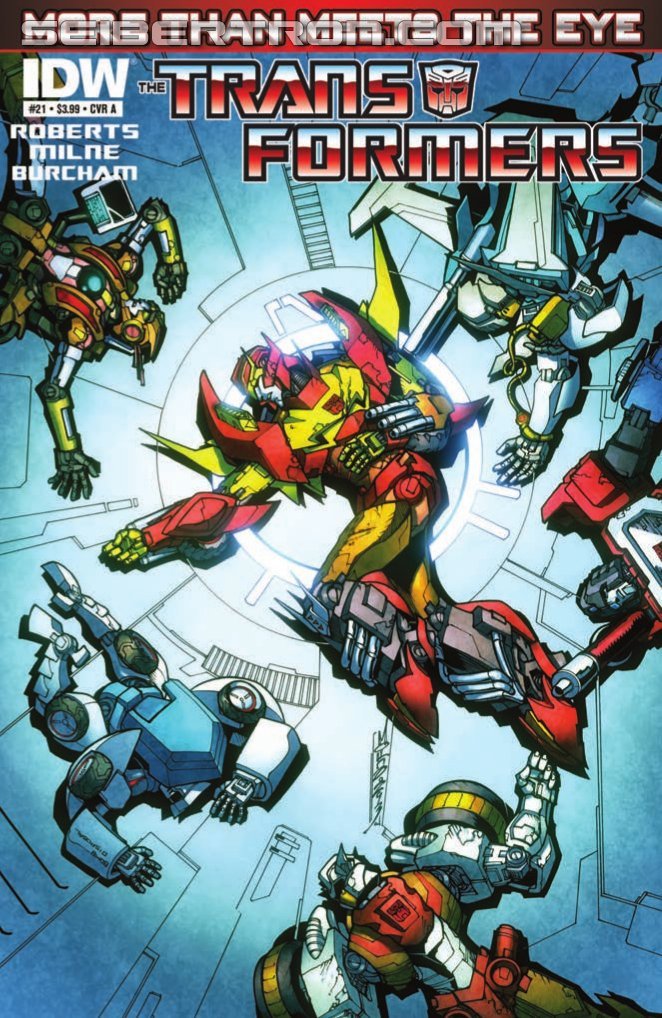 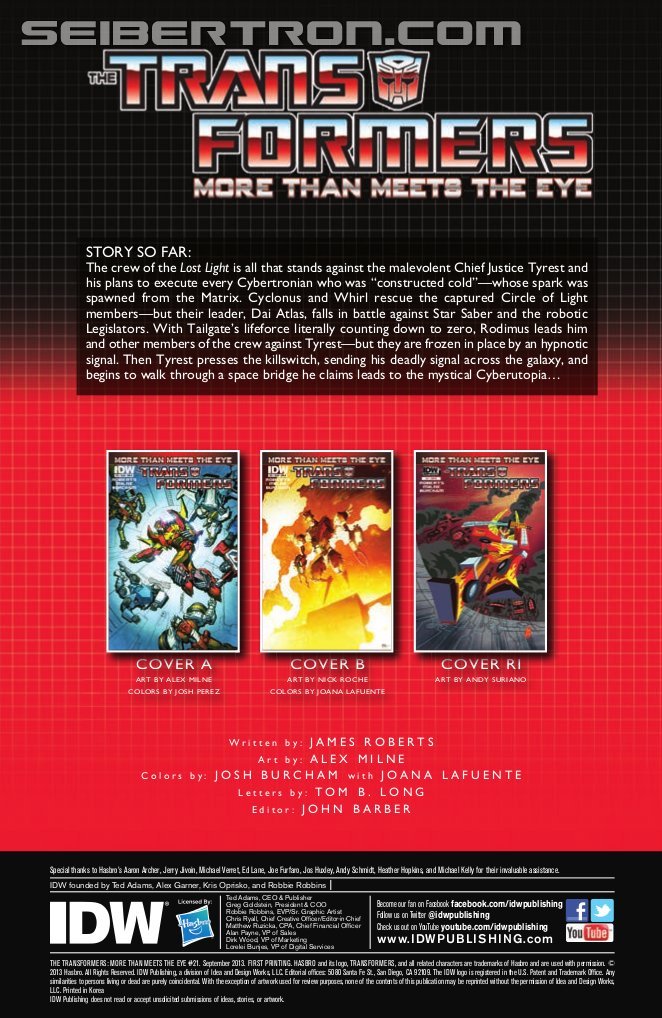 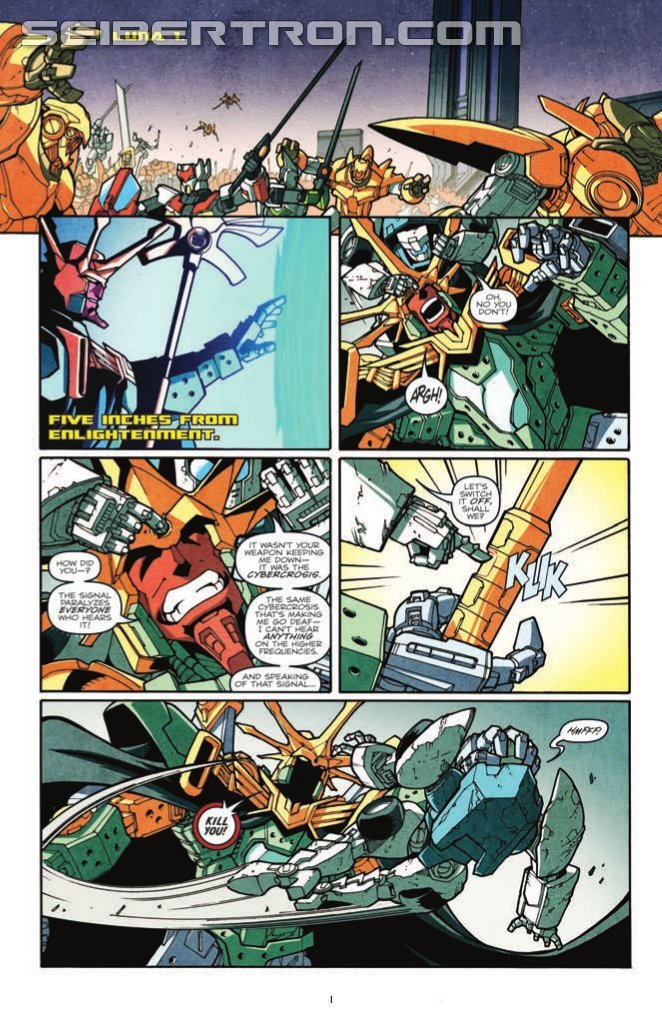 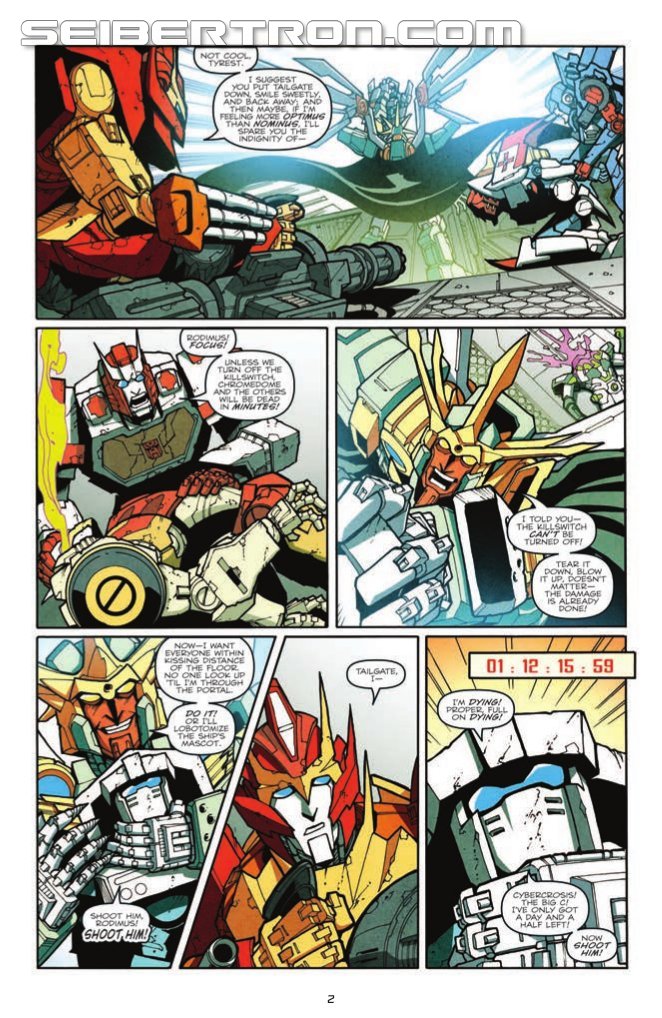 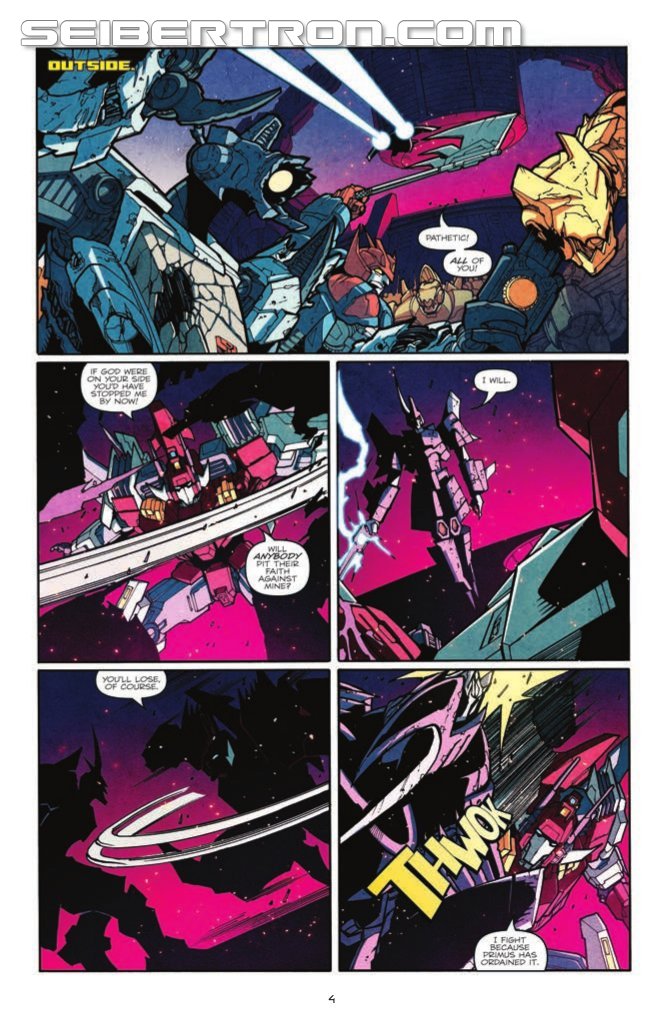 Yeah, that was Mariel Romero, and good call indeed! Working on the review this weekend, will have to tread lightly with spoilers after reading it..

Well put. I'm itching to discuss the whole issue, but I won't. Yet.

that's good to hear. The excitement for this reminds me of when the last issue of Wreckers was about to come out. only a couple more sleeps

That's what I thought when it was going to be Star Saber vs Dai Atlas. I hope they don't make the cyclonus star saber thing only a couple panels.
Re: IDW Transformers: More than Meets the Eye #21 Preview (1519095)
Posted by Va'al on September 21st, 2013 @ 4:43am CDT
Cyclonus has a pretty big role in the whole issue. Fans of him will not be disappointed.

Manterax Prime wrote:Did they really need to have Star Saber refer to "God" and Primus separately?

Yeah, it is a bit disconcerting. Isn't Primus the TFs' god?

Va'al wrote:Cyclonus has a pretty big role in the whole issue. Fans of him will not be disappointed.

Do we get payoff from the hug?

Va'al wrote:Cyclonus has a pretty big role in the whole issue. Fans of him will not be disappointed.

Do we get payoff from the hug?

I mean Whirl did try to kill him once already and this is an even better opportunity...

Yes. And no. And you'll have to wait.

ENDGAME! A handful of heroes stand in the way of a tyrant with the power to destroy AUTOBOTS and DECEPTICONS alike. But what if stopping him carries an even higher price? Get ready to say goodbye to some old friends as More Than Meets The Eye delivers on two years’ worth of promises. Story
The highly awaited fifth part of the Remain in Light arc is here. Will Tyrest win and his mad plan kill everyone? Will Tailgate die? Will there be death death and more death aboard the Lost Light and Luna-1? Quite probably. Or maybe not. I mean, the death thing is certain, but not the victims. Will we get answers to all the questions so far? Read on! This close, people, this close

This is a heavily packed issue, with a lot of plotlines being tied up crossing paths, returning from previous collections and death. Of course. Tyrest's plan seems to be succeeding so far, inside Luna-1, while on the outside Whirl, Cyclonus and the Circle of Light fight against Star Saber and the Legislators. And I have to say, the fight scenes are well planned and thought out. Cyclonus in particular has some really good moments, and First Aid is getting better and better. Look at him, being all cool and brooding

The rest of the story, however, did not satisfy me as much as I thought it would. It's good, but it doesn't give enough closure for MTMTE to now lurch into Dark Cybertron. There are some fairly emotional moments, and some anger-inducing ones. There are some '..really?' moments, and some smirk-provoking ones. But sadly, I can't help but feel that the issue has been overhyped. The fandom, played here by Pharma

It's good writing, but there are tone discordances, using humour in the wrong places, dragging in plots and more plots and resulting in a chaotic sequence of facts, which work a lot better in the prose extracts included at the end of the issue than the issue itself. A similar thing happened to the Overlord arc, it's a shame to see it here again.

Artistically, Milne had a lot to do for this one. There are multiple characters in most panels, and Roberts did not go easy on the details! While the story may be very dense, the artwork makes it a lot easier to follow what is happening on the page. No inker is credited, either, so it must all be Milne's work. It is clear here that Whirl is being awesome

Colours on the issue are done by both Josh Burcham and Joana Lafuente, and they look stunning. The Cyclonus parts have some excellent work on shading and lighting, and really set the tone of his story. Some amazing colours show up in Skids' panels, but I cannot show them here, for good reasons. So have some cool mood shading with fire sparks

Same for the lettering, by personal favourite Tom B. Long. He shines best in all the scenes I can't show in the review, as the soundwords are mostly of characters killing, being killed or revealing the secrets of life the universe and everything. A shout goes to the cover artists, Nick Roche, Josh Perez and Andy Suriano, who did an amazing job, especially the latter's Samurai Jack Rodimus special variant!

Overall, the end of Remain in Light is good. But there are so many nagging questions and unresolved issues and hand-waving resolutions that I'm left with the feeling that an extra issue would have made it a lot better. As I said, the prose extracts at the back are a lot more helpful and enjoyable to the overall understanding of the plot, and give a better sense of closure, after a fashion. As I unleash an unfavourable review out to the fandom

The artwork is good, as usual, but it's the colours that really stand out for me in this particular issue. Cyclonus and Tailgate get some great palettes in their personal storylines, and Skids has some excellent colour and sound stuff going on. So yes, pick this up, but be prepared to still feel hungry.

Re: IDW Transformers: More than Meets the Eye #21 Preview (1519686)
Posted by sabrigami on September 24th, 2013 @ 8:30am CDT
A bit harsher than I thought, but it's fair. This comic has always suffered from bad pacing in the final issues. That rarely bothers me though. As long as the more current and pressing issues get answers I'll most likely be satisfied.

Is it bad I think that pic of Pharma is swoon worthy? That expression makes my inner fangirl melt. Come tomorrow that will probably change to horror or anger once that photo gets more context

As usual Milne does an amazing job.

Ty for the review Va'al. Yet another bang up review to whet my appetite

Re: IDW Transformers: More than Meets the Eye #21 Preview (1519687)
Posted by ScottyP on September 24th, 2013 @ 9:01am CDT
I don't agree with everything here, though a lot of it is dead on point as well. Guess I'll talk more about it tomorrow so I don't accidentally get all spoiler on ya'll

ScottyP wrote:I don't agree with everything here, though a lot of it is dead on point as well. Guess I'll talk more about it tomorrow so I don't accidentally get all spoiler on ya'll

Oh, I'm interested to see what you think I got right.

Va'al wrote:Yeah, that's the thing. The hype made it to be so much more in terms of resolutions, loose ends, closure and whatnot that the story felt a bit crammed. And as someone mentioned on the IDW boards, the prose piece was actually necessary for some things to be explained, rather than an added bonus.

And don't forget the cop outs:

Oh, Tailgate didn't die! Cyclonus healed him by offering up spark energy from his Great Sword. Wow. That sounds a bit dirty.

And apparently Ambus wore so many layers of armor that he was A-OK mega fine, despite his spark shrinking which was magically fixed by plot convenience Ratchet finding a cure for everything, apparently.

At least Pharma and the Legislators actually died to provide some resolution.

And c'mon, Cyclonus, why do you deny yourself resolution to your ongoing subplot? Well, at least the fake out was fun while it lasted...
Click here to view additional comments about this topic at the Energon Pub Forums ...