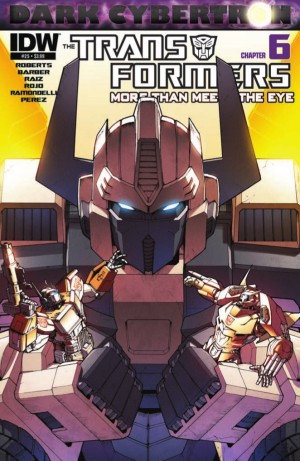 Thanks to our friends over at IDW, we have the first full preview of the year! Take a look below at the first pages of More than Meets the Eye #25, the sixth chapter in the Dark Cybertron event. And make sure you come back tomorrow for the Seibertron.com review!

A HERO FALLS—AND ONE RETURNS! The struggle in the DEAD UNIVERSE heats up as ORION PAX—the ’bot who was once OPTIMUS PRIME—and RODIMUS struggle with the legacy of PRIMES! Meanwhile, the Lost Light is under attack in deep space—and SHOCKWAVE and the terrifying NECROTITAN threatens CYBERTRON!
FC • 32 pages • $3.99

A HERO FALLS—AND ONE RETURNS! The struggle in the DEAD UNIVERSE heats up as ORION PAX—the ’bot who was once OPTIMUS PRIME—and RODIMUS struggle with the legacy of PRIMES! Meanwhile, the Lost Light is under attack in deep space—and SHOCKWAVE and the terrifying NECROTITAN threaten CYBERTRON!

And here we are, halfway through the BIGGEST EVENT OF THE EVER HISTORY OF EVERYTHING, according to the solicits since at least two years ago. And I feel like we've hit a bit of a lull, though not an unwelcome one in the issue itself, rather in the plot - unevitable? Maybe. Let's read on.

We're back to the three storylines, following the Lost Light crew inside Metroplex, the boxed lot in the Dead Universe and Starscream's (barely) Cybertron. While the first two actually advance a little, the latter in particular seems to not do much other than re-establish the threat of the Necrotitan and Starscream's connection to it. And a little bit on the 'outcast' faction, I suppose.

The other two plotlines, on the other hand, do a little more, with the biggest parts played out in the Dead Universe, especially towards the end of the section. We get some interesting goings-on with the otherwise static situation of the trapped characters, and exchanges are made between Nova Prime and his (ex?) heir Orion - and other things happen.

No, Rodimus, we're not

The final page brings us a fairly big revelation about one of the other players in the story, though see below for more on this. The lull is expected, at this point in the series, and it realy could be worse, and there are still some good moments of characterisation if not plot advancement. I did like the snuck-in addition on Slug's name-change, too.

We're back to three separate art styles, with James Raiz on the Lost Light/in Metroplex' body, Livio Ramondelli in the Dead Universe and Atilio Rojo on Cybertron. And I have to say, I have no major complaints this time round (bar one)! Raiz in particular really shines in this issue, with thinner inks and some crazy panel work; Rojo's lines are a lot nicer too, and really work with the setting; Ramondelli is suited to the DU, until the last page reveal - it took me a while to figure out what was going on, and it detracted from the reveal itself.

Escher-ing in the new year

Josh Perez does is still doing some pretty amazing work, blending into both Raiz' and Rojo's style, and still keeping in tone with the er.. tone of the story being told. Some of the nuances are really cool, especially tha dark/light fade-ins. Ramondelli's colours are also good, as I've said many times before, really suit the Dead Universe - even with the proviso above.

Hardhead is quite the thinker, clearly

Gilbert Lazcano appears to be the regular letterer for now, and I really like some of his more creative moments, like the issue's title page and the Dinobots' speech. All in all, the issue looks good, but that final page really did not do it for me I'm afraid. The two covers by Phil Jimenez and Brendan Cahill are great though, especially the latter!

As I've been saying throughout, we've hit the plateau, and it was to be expected, really. Some of the characters (Getaway, Astrotrain, Dinobots, Flatline) get more of an occasion to take the spotlight, even if just for a little while, but the introduction of Tankor so suddenly does feel a bit odd, and blatantly a toy advertising device.

I wasn't as bothered with the three different styles this time either, except for that final page (OH I was very annoyed for a bit), and the Escher style scenes are excellent, as are some of the bigger splashes and spreads, with the added bonus of really good, mood-setting colouring too. Next?

84forever wrote:Horrible. Horrible writing and the art wasn't fit for a coloring book. Is Don Figueroa not available? Swerve has a cellphone now? The Transformers are written to much like humans ... I swear, the Dreamwave ongoing was head and shoulders above this crap! How is Hasbro allowing this to happen? And for so many years?! The Hasbro guys have to be either blind or illiterate.

Although Dark Cybertron is a collaboration b/t Roberts & Barber, it seems more RID-like. Frankly, I've thought RID has been poor.