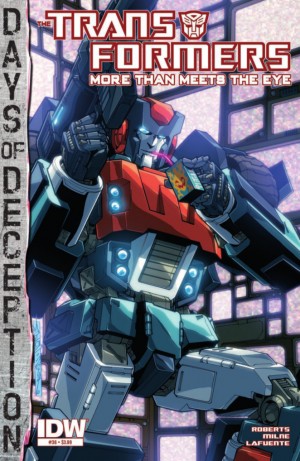 In further comics news this week from IDW Publishing, Elegant Chaos, the new More Than Meets the Eye event, begins here, with issue #36. Check out a full preview below, and head back to Seibertron.com later in the week for our review.

Transformers: More Than Meets the Eye #36—Days of Deception
James Roberts (w) • Alex Milne (a & c)
OUTLAWS! Before the war, Orion Pax was part of the Establishment—until a friend opened his eyes to the truth behind the lies and he vowed to overthrow the system. Now, it seems as if his newfound enemies are willing to go to any lengths to see him dead—even if it means waiting four million years...
FC • 32 pages • $3.99

I'm not a fan of time travel stories, but I trust Roberts. Since I read these in trade I'll have to wait a bit to find out how everything will work itself out in the end.

jogunwarrior wrote:And since I read this in trade and am only up through Dark Cybertron, I have to ask: Who is the blue guy that speaks on the lower left panel of the last preview page.

Riptide! New addition to the Lost Light crew, after the end of Dark Cybertron.

Re: IDW Transformers: More Than Meets the Eye #36 Full Preview (1630411)
Posted by Va'al on December 16th, 2014 @ 9:59am CST
In case you missed it with Transformers #36 last week, and are not able to get it with MTMTE #36 this week, IDW artist Alex Milne has shared his double-cover for the 30th Anniversary of the Transformers - and explained just how much time and effort went into it. Check it out below!

Originally when I created this image, it was for a totally different project that had something to do with the 30th anniversary, but wasn’t part of the homage covers that others had done. This is why the original date of the penciled image is 2013. I had planned to finish it on my own if it wasn’t going to get used and make a print out of it, but the time i needed wasn’t available, so it just sat in one of my portfolio’s. That was until I was asking if there were any 30th covers I could do and John Barber asked about using this image. This was perfect since I didn’t have to draw a new image up and I could finish this one I had already penciled.
looking back on it I might have changed a few characters for different ones, but this was before Windblade had come out.

There are 30 characters on this image. 30 for 30. I thought that would be nice. All of these characters are from the comics and are from comics IDW has printed. I guess I could have added in some Unicron Trilogy characters, but alas it did not happen.

The colours were done by the very talented Mr. Josh Perez who I enjoy working with and miss doing so on a more regular basis. Maybe one day we will work on a whole book together again

Anyone care to lend a hand on who those guys are?

Above Soundwave is Lockdown, in the MTMTE/ROTF incarnation.

As for above Drift, I can see movieverse Blackout in the background, and Prime Knockout closer to us.

Anyone care to lend a hand on who those guys are?

Above Soundwave is Lockdown, in the MTMTE/ROTF incarnation.

As for above Drift, I can see movieverse Blackout in the background, and Prime Knockout closer to us.

Amazing artwork and I love how all the different incarnations blend so seamlessly together.

jogunwarrior wrote:I'd be ecstatic if Prime Knockout were somehow integrated into the MtMtE comic!

Keep an eye on the upcoming Windblade series.

Randomhero wrote:It's really hard to figure this one out. Obviously brainstorms target isn't pax because we know the war doesn't happen and the Decepticons don't take over. I don't think brainstorm is actually a Decepticon but I don't see him as a functionist loyalist either because the "knock offs" get exiled and Brainstorm is constructed cold. It's possible he's like shockwave and his loyalty to cybertron and only cybertron.

We'll considering the functionists are still in control, my guess is he went back to target Megatron, stop him from ever starting an uprising. The fact that his first test was aimed at the planet Megatron was on at the time might mean that his device is targeted to him somehow
Re: IDW Transformers: More Than Meets the Eye #36 Full Preview (1630555)
Posted by ZeroWolf on December 16th, 2014 @ 5:15pm CST

fenrir72 wrote:Unicron is finally showing up? One critique, why put out the Matrix, which needs to be manipulated with two hands in order for it to work and hold a gun in the other hand? For artistic effect but not really practical.

I doubt it actually means Unicron is showing up yet as the whole picture is of the transformers multiverse. That would be a funny twist though, brainstorm is actually an agent of Unicron, a funcionist government probably wouldn't pose as much threat as the normal universe who are used to a lot of warfare.
Re: IDW Transformers: More Than Meets the Eye #36 Full Preview (1630641)
Posted by BumbleDouche on December 16th, 2014 @ 10:44pm CST
I'm frequently blown away by how awesome recent Transformers art has become and this is no exception. Personally however, I often focus on the pencil work as the basis for deciding which art I like best. This series of images shows just how flawed that view is, as it really highlights the sheer volume of meticulous effort put in by the inkers and colourists, not just the penciller. That we have such talented artists collaborating on our beloved Transformers is something I feel strangely (vicariously?) proud of, especially when you consider some of the very ordinary-looking art in contemporary comics.
Re: IDW Transformers: More Than Meets the Eye #36 Full Preview (1630720)
Posted by Va'al on December 17th, 2014 @ 7:39am CST
Timey Wimey Stuff
(Spoiler free-ish)

Synopsis
OUTLAWS! Before the war, Orion Pax was part of the Establishment—until a friend opened his eyes to the truth behind the lies and he vowed to overthrow the system. Now, it seems as if his newfound enemies are willing to go to any lengths to see him dead—even if it means waiting four million years...

You will probably remember what happened all the way back during the 2009-11 ongoing series, in particular the Chaos Theory arc that James Roberts co-wrote. You might also have in mind the continuation of that story in Shadowplay, the Shockwave/Orion Pax arc during the first season of MTMTE. If you do not, you probably want to brush up for issue 36, as Elegant Chaos continues the pre-war story.

Oh, and all of that, too

Though not exactly as we might all remember it so far (strange choice of words, I know, but you've seen what's been happening in MTMTE so fa r, right? The trousers of time have many legs, and several are unravelling at the same time). Time travel only muddles plotlines, by its own nature, and this issue is not exception.

Which, unfortunately, finds itself to come to standstill in the overall trajectory of the series post-Dark Cybertron. Don't get me wrong, the issue is a great read, fantastic interactions, good dialogue, characters and Whirl. Especially Whirl, in both his present and present-in-the-past situations, along with some amusing time-paradox musings.

But it doesn't really do much else, sadly. It reinforces old situations and concepts; it has a smirk-inducing conversation between two key players which is really a one-sided admission and reflection; it sets the stage, but only that smidge more than the last two-three issues, for Elegant Chaos. And I wanted it to do more.

As far as unintentional bottle episodes happen, however, the art brought to the issue by Alex Milne is a joy to behold - especially in its cranked up expressivity in both facial and body language, including some of the least likely to be able to do so (looking at you Whirl). On top of that, action sequences are magnificently laid out, with a proliferation of double-spreads and panels spanning multiple pages.

Which are obviously but enhanced by Joana Lafuente's gorgeous colour approach, already from the very first panel of the very first page. And it just gets better from there, really, adding action to action, emotion to emotion, decoration to interiors, atmosphere to planets and making everything look just so good.

Tom B. Long and his lettering are not to be underestimated, either - and the title of the issue, and the arc, are an example of the font magic that man can do. The subtle sounds around the scene are also cleverly worked in, and never intrusive, but definitely still there. In terms of covers, we've seen the Alex Milne/Josh Perez Anniversary piece already, and the main one with juiced up Roller - check out the thumbnail for the moody Nick Roche/Burcham Orion Pax variant.

As I said above, the issue is not a bad read, a bad comic or a bad piece of writing. It just did not do what other issues playing around with time, or indeed, arcs in the Functionist plotlines have done previously, such as the wonderful Shadowplay. That is not to say that we may very well see this all play out fantastically as of next month or the forthcoming issues in general.

From an artistic perspective, though, the book dazzles and deals a dizzying delight - not only because of some wonderfully executed double-spread pages, colours and composition, but as a general aid to extricate the intricacies of the potentially convoluted plot. Here's to you, visual storytelling. Make sure you track down a paper copy of this one.

I had to settle on one panel, but there are SO MANY.
Click here to view additional comments about this topic at the Energon Pub Forums ...