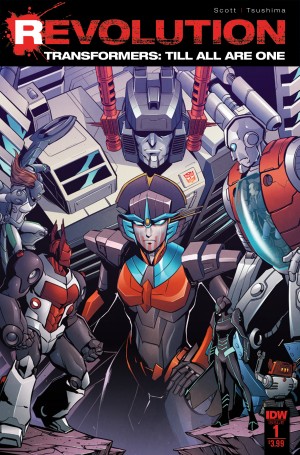 Thanks to Previews World we bring to you the IDW Transformers Solicitations for October, and Revolution is in full swing. ROM's running around, Snake Eyes Vs. Optimus, Windblade, Titans, Thundercracker Vs. Dire Wraiths, and so much more! Check out the solicitations below. And note: No More Than Meets The Eye stuff yet.

TRANSFORMERS REVOLUTION #1
(W) John Barber (A) Andrew Griffith (CA) Marcelo Matere
THUNDERCRACKER AND BUSTER SAVE THE WORLD! A DECEPTICON who wants to be a screenwriter. A dog who wants to, I don’t know, eat stuff and chase squirrels or whatever dogs want to do. A White House under siege by DIRE WRAITHS. And the phone call that brings them all together.
• Just because OPTIMUS PRIME and SOUNDWAVE are leading the REVOLUTION doesn’t mean the rest of the TRANSFORMERS aren’t keeping busy!

TRANSFORMERS TILL ALL ARE ONE REVOLUTION #1
(W) Mairghread Scott (A) Naoto Tsushima (CA) Sara Pitre-Durocher
WINDBLADE ON EARTH! The mysterious link between METROTITAN and MICROSPACE threatens to tear two universes apart, and only WINDBLADE has a chance to heal the Titan… and there she learns a terrifying secret that changes the stakes of the REVOLUTION.
• Featuring OPTIMUS PRIME, ROM, and much, much more!

REVOLUTION #3
(W) Cullen Bunn, John Barber (A) Fico Ossio (CA) Tradd Moore
THEY CAME FROM MICROSPACE! What terror reaches through the tendrils of entropy into our universe-and why does ROM want to kill it? Meanwhile, M.A.S.K.’s MATT TRAKKER makes a startling discovery about the TRANSFORMERS-but will G.I. JOE’s SCARLETT believe him?

REVOLUTION #4
(W) Cullen Bunn, John Barber (A) Fico Ossio (CA) Tradd Moore
SILENT INTERLUDE! One human has the skill to break into AUTOBOT CITY-but what is SNAKE EYES going to do when he finds himself face-to-knee with OPTIMUS PRIME? And outside, MILES MAYHEM and the M.A.S.K. team wait to see who walks out alive…

GI JOE REVOLUTION #1
(W) Aubrey Sitterson (A) Giannis Milonogiannis (CA) Aaron Conley
G.I. JOE IS BACK! Thanks to the events of REVOLUTION, the G.I. Joe team led by Scarlett returns to the fray, leading the charge against invading TRANSFORMERS and other aliens. But when a US military defense base goes dark, Scarlett has reason to suspect that these enemy forces may have infiltrated G.I. Joe. It’s up to her, Roadblock, Rock ‘n Roll, Quick Kick, Wild Bill, and Shipwreck to move in and root out any traitors before the facility falls into the wrong hands!
• A key one-shot connected to the world of REVOLUTION!

TRANSFORMERS TP VOL 10
(W) John Barber (A) Andrew Griffith, Livio Ramondelli (CA) Casey W. Coller
ALL HAIL OPTIMUS! Backed by an army of zealous followers, OPTIMUS PRIME declares Earth to be a part of CYBERTRON’S Council of Worlds-but the DECEPTICONS and the people of Earth won’t take it lying down! Collects issues #50-55.


Does anybody else like those toy package covers? For some reason, I do, and I'd like to hang them on the wall, make it look like its a big pegboard of figures.

Sad that the Dire Wraiths are not the more slug-like man thing faced, type mystical creatures that I remember them as in Marvel. Smart with mystical powers and the ability to become others (I think). Oh well, I guess we'll see what IDW does with them.

Transformers is bad guys, aaagain... Someday, someone will be able to see the difference between good alien robots and bad ones, or even bad manipulative humans for that matter...
Re: IDW Transformers October 2016 Solicitations: Rise in Revolution (1807132)
Posted by D-Maximal_Primal on July 20th, 2016 @ 1:47pm CDT
I like the toy package covers.

I'm just curious as to how this whole Revolution thing will work out. I mean, I'm still nervous about the whole shake up and crossing of the streams, but I do trust Barber and crew. I just can't help but be nervous
Re: IDW Transformers October 2016 Solicitations: Rise in Revolution (1807143)
Posted by Randomhero on July 20th, 2016 @ 2:00pm CDT

I'm just curious as to how this whole Revolution thing will work out. I mean, I'm still nervous about the whole shake up and crossing of the streams, but I do trust Barber and crew. I just can't help but be nervous

I have faith as well. They're playing with the idea that the streams have always been crossed. GI Joe happened when they all returned to cybertron. That's kind of brilliant, playing with a 2-3 year gap on the planet that has history but no present history until they returned.

DC and marvel have been doing that for years retconning things. DC is doing it with now with saying Doctor Manhattan is behind the new 52 which I'm personally not reading but I have kept up on the news and it sounds like it's working.