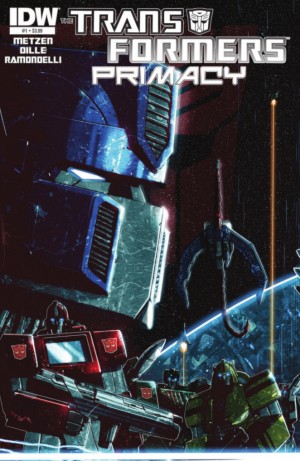 It's been a while since the Flint Dille, Chris Metzen and Livio Ramondelli creative team were together for Autocracy and Monstrosity, in their digital and printed forms. But they're back this week with the first issue to the conclusion of the trilogy: Transformers Primacy! Check out a full preview below, and head back here for the Seibertron.com review later this week.

Transformers: Primacy #1—SPOTLIGHT
Chris Metzen & Flint Dille (w) • Livio Ramondelli (a, c)
THE WAR FOR CYBERTRON! Optimus Prime versus Megatron. Autobots versus Decepticons. At the dawn of the conflict, battle lines are drawn and sides are set… now legends will be made. The war that would define a planet begins in earnest—and its revelations will shake the TRANSFORMERS’ world to the core!
FC • 32 pages • $3.99

Synopsis
THE WAR FOR CYBERTRON! Optimus Prime versus Megatron. Autobots versus Decepticons. At the dawn of the conflict, battle lines are drawn and sides are set… now legends will be made. The war that would define a planet begins in earnest—and its revelations will shake the TRANSFORMERS’ world to the core!

Autocracy did some really interesting things by taking politics to a whole other level. Monstrosity brought 'the Quintessons' and Trypticon back into the game. Primacy is supposed to shape the IDW Transformers universe as we know it - so what is the missing link between the fall of Trypticon and the rise of Megatron? It looks like issue 1 starts answering that question.

The focus of Chris Metzen and Flint Dille appears to be shifting between Optimus Prime and Megatron as they both 'recover' from the happenings in the previous two mini-series, with the latter in particular sometimes questioning (?) his actions - and yet, at the same time, we also have some nice interactions between Grimlock and Rodimus, Optimus and Ironhide, Megatron and.. well. You'll see.

There is one major snag in the issue, during Optimus' sections, which I'm hoping will get explained later in the series - but for now it's not too distracting (for me at least), and considering John Barber is editing the work, some kind of patching could always take place at another stage, or there's a better reason for it happening as it does.

All in all, there are some big set-ups for this run, with some nice interactions between the key players, and some past exploration and world-defining, delving into pre-established elements of the franchise and plots hinted at in both Autocracy and Monstrosity, and the wider IDWverse.

Livio Ramondelli resumes his task of showing us the beginning of Cybertron's dark ages, with his trademark darker style and colours, shining on big splash pages and spreads, and I mean BIG. The characters, the scope, the layouts - there's a sense of size and scale that follows from some of the later chapter in Monstrosity sliding into here, and not just in the art itself.

The colours obviously work well with the linework, and there are some nicely contrasting tones in some flashback sequences. The eye differences are a nice touch too, with Grimlock, Optimus and Megatron showing off different optics. And a very nice touch comes from letterer Chris Mowry, helping with giving a voice to the different characters, each in its own slightly unique way, and some great translucent sound effects.

I'll take a little longer on the covers, as the main one by Ramondelli is but a fourth of the series' run, but it is joined by an amazing Optimus Prime revealing the matrix by Windblade's Sarah Stone (a nice echo of one of the moments shown above) and an excellent 30th Anniversary variant by Casey Coller and JP Bove, commemorating the smelting pool and poor Scrounge (see thumbnail).

Metzen and Dille's writing is slightly different from the rest of IDW's current output, but still holds its appeal with both older audiences and fans of the more modern ongoings. And their style fits the tone and time of the story, without any doubt, focusing on the two main players of the beginning of the war. Ramondelli's art returns to complement them, and I very happy to have Barber on editing, making sure it all fits in together - even with Omega's confusing statements.

And so do we

It's an easing into the story again, definitely. Some big stuff went down in what leads us to this point, and with this issue we're discovering bigger things still slowly emerging from Cybertron's past and leading into its future. And there are much much bigger things to come, if the last pages are anything to go by. Big things indeed.

I enjoyed both books, but Monstrosity definitely feeds more into this than Autocracy did with Monstrosity.
Maybe give the wiki page a read, if you don't want to track them down?

Rodimus Prime wrote:So are Monstrosity and Autocracy required reading for this? Because I haven't read those, and I am actually intrigued by this, especially the exchange between Rodimus and Grimlock.

If you're interested, get Comixology, and check with Autocracy and Monstrosity. IDW will likely have a -50% sale on the collected edition of at least one of those. That's how I got Autocracy which got me interested in Monstrosity.

I've learned my lesson from Monstrosity, I'm waiting for a sale after the series is over. Getting each chapter as it came out was kinda cool because I was on the same page as everyone else, but the writing's not exactly brilliant, the art is not very good and all that makes it all kinda hard to follow. On top of that it just kinda pissed me off writing style wise. Too much recycled stuff and half of it makes no sense.

It's also weird how everybody in this series is pretty much the same as what they're like in the present, except Kup, Kup is a "young" Autobot. Why the hell is Kup the only one to freaking age in this?

Sure it's kinda enjoyable but, not something I need right away.
Re: IDW Transformers: Primacy #1 Preview (1600666)
Posted by Va'al on August 20th, 2014 @ 10:51am CDT
Yet more comics news from IDW Publishing! This time, we take a look at the Sarah Stone variant cover for the second issue of Transformers: Primacy, out next month, courtesy of the IDW Tumblr - including Stone's clean version from her own blog. Check them out below!

Re: IDW Transformers: Primacy #1 Preview (1600668)
Posted by ZeroWolf on August 20th, 2014 @ 11:02am CDT
I love her art work, it's so clear, and her starscreams always look so devious.
Re: IDW Transformers: Primacy #1 Preview (1601983)
Posted by Va'al on August 26th, 2014 @ 3:35am CDT
Hailing from the Facebook page of IDW artist Livio Ramondelli, we get a look at a trailer for his latest work with Transformers, along with Metzen and Dille: Primacy. The clip is by video game producer, writer and designer John Zuur Platten, and is embedded below. May contain some slight spoilers for issue #1 - of which you can read our review here!


http://vimeo.com/103778671
Re: IDW Transformers: Primacy #1 Preview (1602858)
Posted by Va'al on August 30th, 2014 @ 12:01pm CDT
There may be no new Transformers comics coming out next week, but iTunes (via IDW's Mariel Romero) comes to our rescue by providing the usual three-page preview. Check out below a sneak peak at the second issue of Transformers: Primacy!

DECEPTICONS ASSEMBLE! The war for CYBERTRON begins in earnest! MEGATRON brings together the deadliest of his troops for an unbelievable assault on the AUTOBOTS—and the TRANSFORMERS’ world is shaken to the core!

Stone's an artist after my own heart.

Re: IDW Transformers: Primacy #1 Preview (1605058)
Posted by Va'al on September 9th, 2014 @ 1:47am CDT
Ready to get ready for something BIG about to happen in the past of the Transformers? Check out this week's comic release from IDW Publishing: Primacy #2! From the Dille, Metzen, Ramondelli team, who are definitely brewing something up for the series - and we'll talk about it in our review on Wednesday, so head back to Seibertron.com then.

Transformers: Primacy #2 (of 4)
Chris Metzen & Flint Dille (w) • Livio Ramondelli (a & c)
DECEPTICONS ASSEMBLE! The war for CYBERTRON begins in earnest! MEGATRON brings together the deadliest of his troops for an unbelievable assault on the AUTOBOTS—and the TRANSFORMERS’ world is shaken to the core!
FC • 32 pages • $3.99

Bullet points:
The End of the Beginning of the TRANSFORMERS Saga!
30th Anniversary Variant Cover by Sarah Stone!

Re: IDW Transformers: Primacy #1 Preview (1605063)
Posted by FruitBuyer on September 9th, 2014 @ 2:09am CDT
It's like I'm reading the Marvel run with that obnoxious name-dropping. Then again it is that hack Metzen writing.
Re: IDW Transformers: Primacy #1 Preview (1605082)
Posted by BumbleDouche on September 9th, 2014 @ 7:00am CDT
Aaannnddd Ramondelli is back at it again: Poorly sequenced art leaving you to wonder what exactly is supposed to be going on. On top of that, what's up with the Predacons? We've seen them in pre-Earth modes in stories set much later than this (but still before they arrived on Earth)... But now we're seeing them possibly at the earliest in the IDW timeline so far, at a period millions of years before their arrival on Earth yet they are bearing the alt-modes of Earth animals that may not have even evolved yet?

MegaDump wrote:On top of that, what's up with the Predacons? We've seen them in pre-Earth modes in stories set much later than this (but still before they arrived on Earth)... But now we're seeing them possibly at the earliest in the IDW timeline so far, at a period millions of years before their arrival on Earth yet they are bearing the alt-modes of Earth animals that may not have even evolved yet?

Hm. You have a point here.

I just checked Stormbringer and Spotlight: Jazz, and they're definitely sporting their pre-Earth modes in both of those. And they're on Earth in the latter, too.

This is the second inconsistency with the established continuity so far - though I wonder if it's more for the sake of the upcoming Combiner Wars than anything: new readers may not go as far back as the early Furman/McCarthy run, and the alt-modes would need explaining to the new audience.
Click here to view additional comments about this topic at the Energon Pub Forums ...