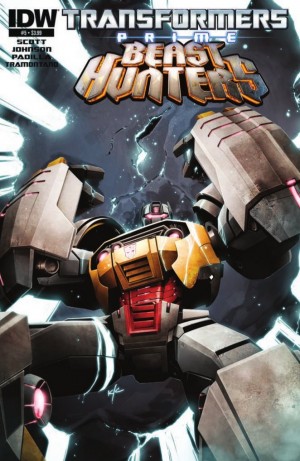 And finally, a preview of the new story-arc for IDW's Transformers Prime Beast Hunters! Check out the first pages of issue 5 below.

Transformers Prime: Beast Hunters #5
Mairghread Scott & Mike Johnson (w) • Agustin Padilla (a) • Ken Christiansen (c)
CYBERTRON LIVES! The DINOBOTS lend hand to their fellow underground Autobots... but things quickly go awry as the very planet begins to quake and shift. Floods, cave-ins, the very ground dropping from underneath... is CYBERTRON reborn or are these the last flailings of a dying planet?
FC • 32 pages • $3.99 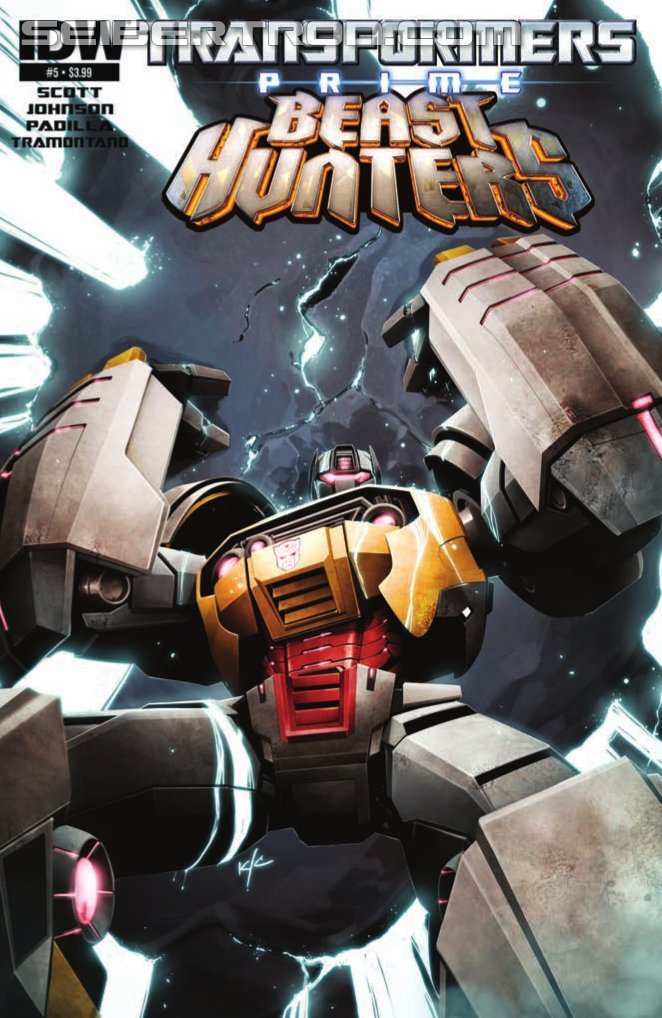 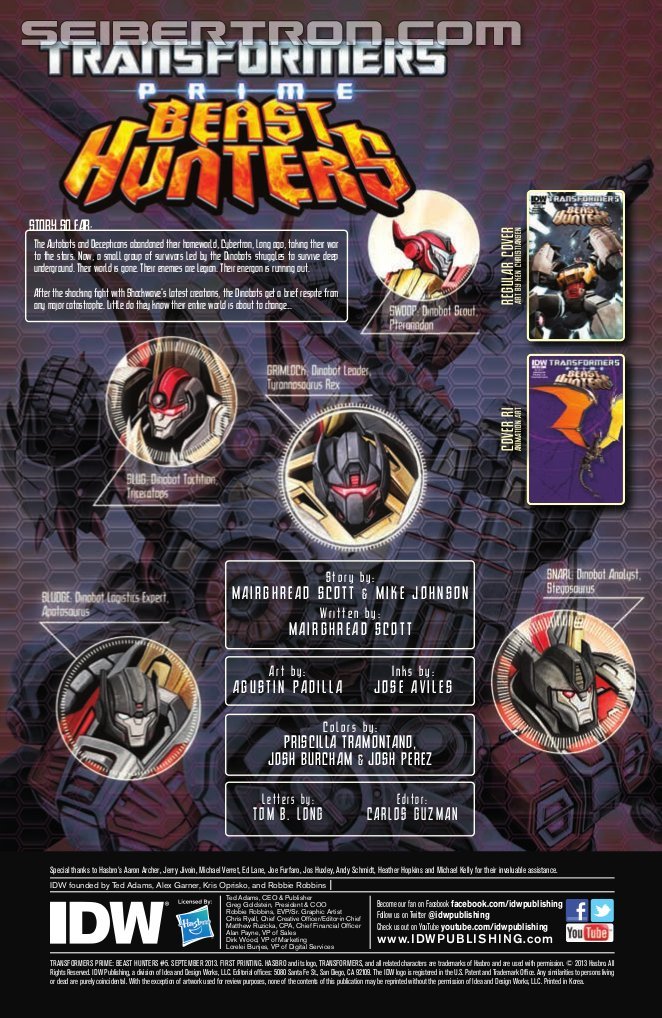 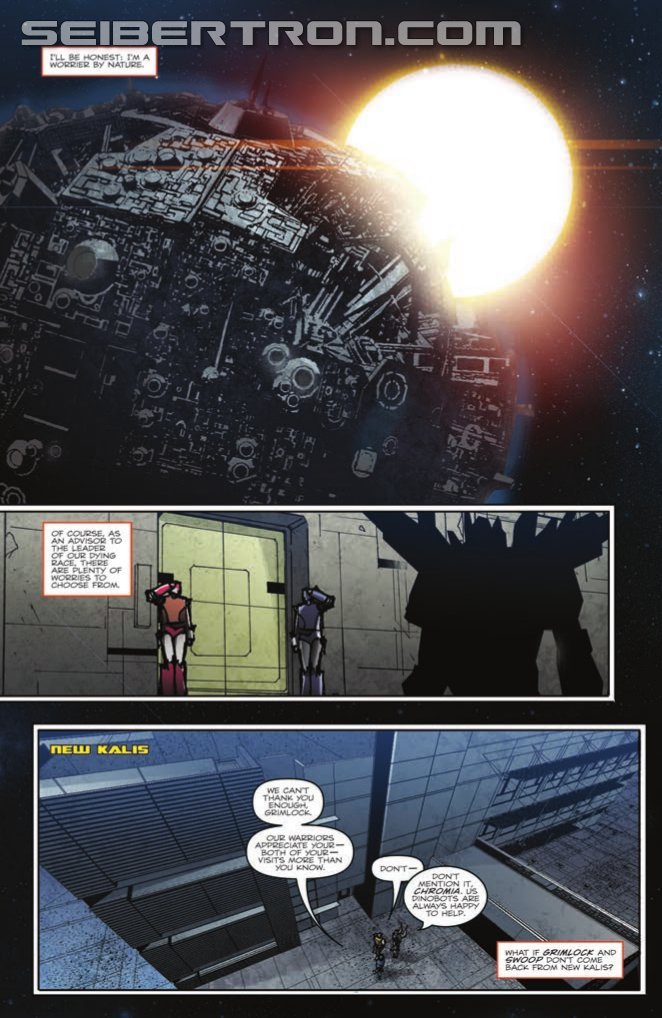 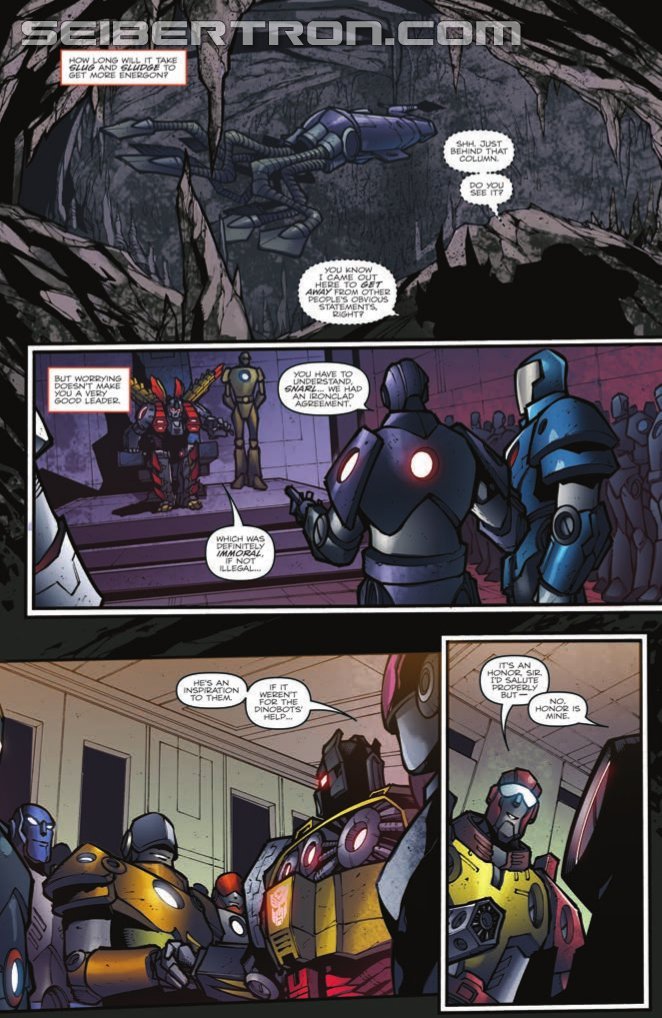 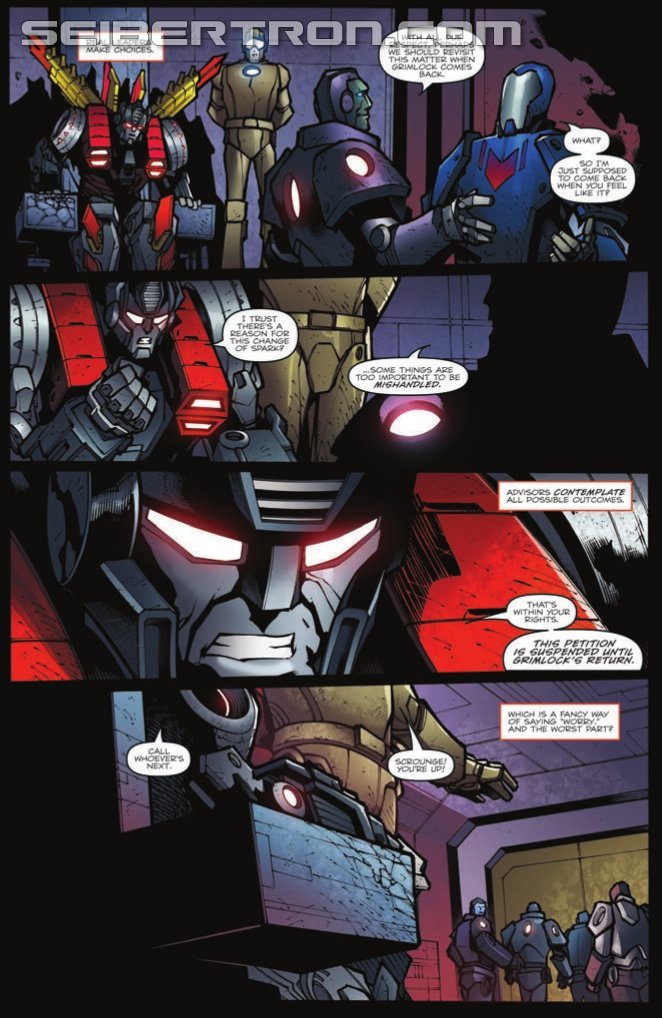 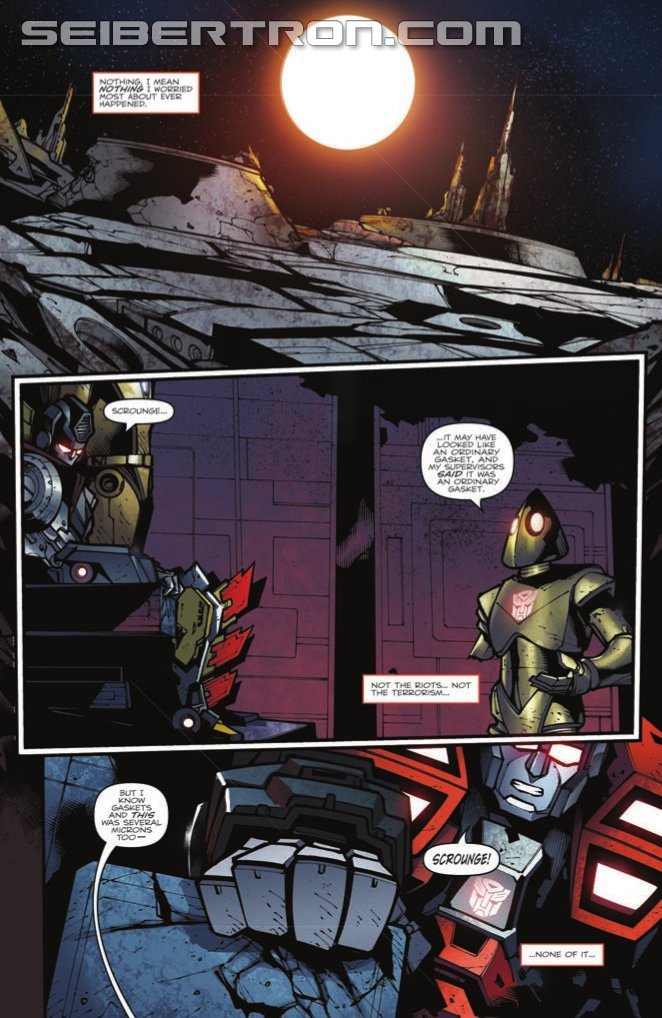 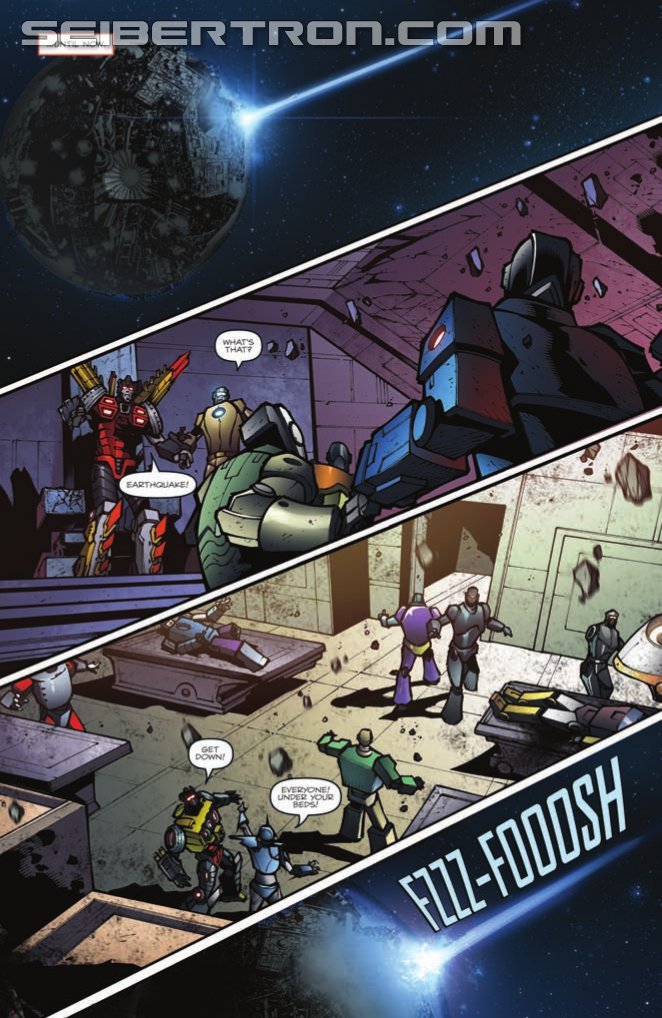 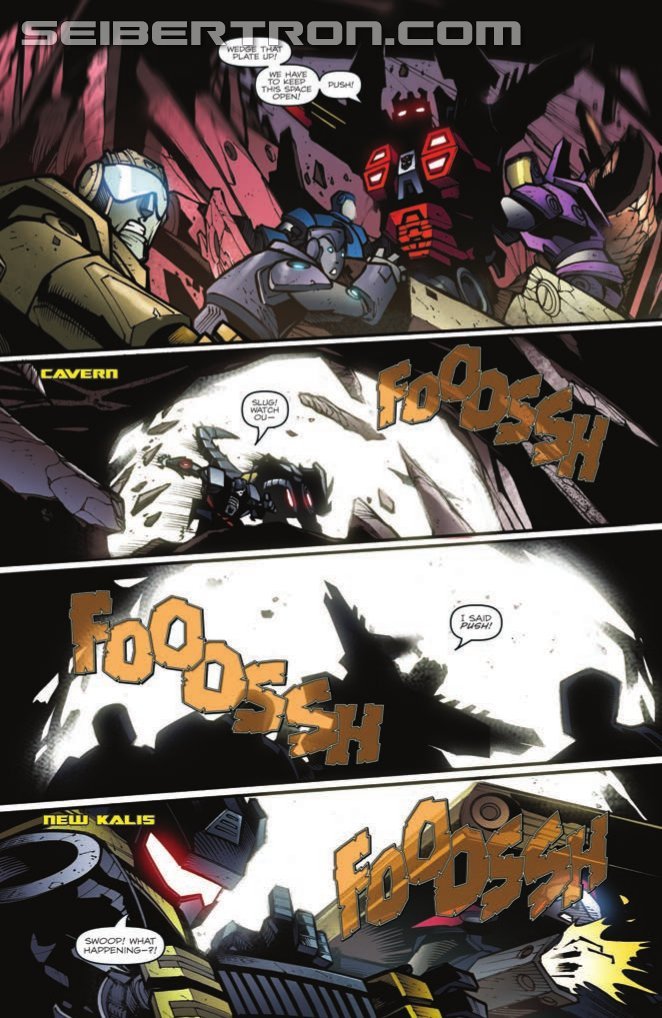 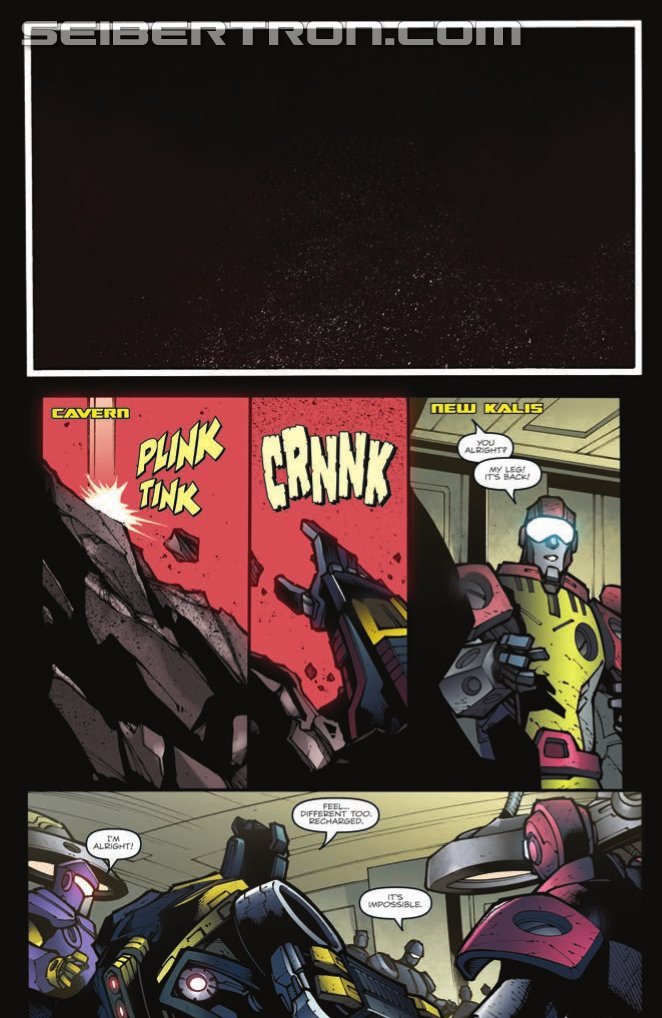 That part was a bit confusing, but we'll see how the issue continues.

CYBERTRON LIVES! The DINOBOTS lend hand to their fellow underground Autobots... but things quickly go awry as the very planet begins to quake and shift. Floods, cave-ins, the very ground dropping from underneath... is CYBERTRON reborn or are these the last flailings of a dying planet? Story
It's the beginning of a new story-arc in Prime: Beast Hunters, and Mairghread Scott is back on writing duties (but still co-plotting with Mike Johnson). Cybertron is sort of dead, everyone is getting on ok and all of sudden Team Prime from the animated series restore life on Cybertron by activating the Omega Lock during their final battle with Megatron!

It's nice to see the comic and cartoon series matching up, and giving us a sense of temporal continuity between the two. We were promised that by the sixth installment we'd have some link between the two, so there may still be more to see after this issue - an issue which doesn't do much, unfortunately, except for introducing 'new' caracters like Chromia and Scrounge. And a Cobra Commander cameo

We get to look at how the different groups working with, for or against the Dynobots, our heroes included, deal with the aftermath of the regeneration of Cybertron. Which may be all healthy and blue and glowy, but is it the same for those who were on it when it happened?

It's good to see Scott back on writing, and the dialogue has definitely improved from the last arc, but the issue overall is not particularly exciting, and feels a lot like a big setting the scene for next month.

Agustin Padilla continues to be assisted by Jose Aviles on inks, and the style is very consistent this time round! The sketchier version of Padilla's style does not feature at all, with some very clean, if at time thick, lines to finish it off. Bar one jarring confusing moment, a script/art clash. Or is it just me? Three colourists are on board this too, with Priscilla Tramontano, Josh Burcham and Josh Perez taking turns on the artwork - and somehow, there are some glowy blemishes scattered here and there on some corners. Strange. Still, the colours and lighting are consistent, and work nicely with the script. The artwork overall is nice and clean, with some clever use of panels and lighting, Tom B. Long's lettering doesn't get much time to shine but is still really good and enjoyable, and Ken Christiansen's artwork on the main cover is absolutely magnificent.

All in all, not a bad issue, but not up to the same level that Scott's first arc was all about. We get a look at a bigger cast, hear Snarl's voice and the Dinos are split up for a bit, exploring more of Cybertron reborn, but there isn't that much going on, really. Or happened at all, really

The artwork is also good, but nothing stands out for me this time, unfortunately. Aviles' inks can be a bit heavy, though that is a minor complaint, and the one inconsistent moment kind of stuck with me. Here's to the next issue, now that the set-up is done!