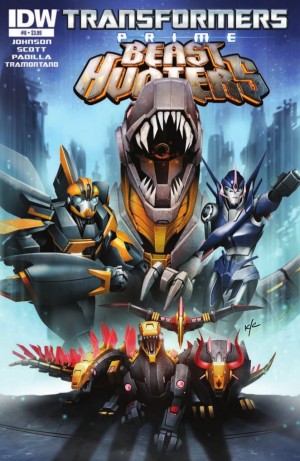 This week IDW Publishing brings us the final issue of the Beast Hunters series, tying up with the TV series at last (or does it?). Check out the full preview below, and come back tomorrow for the Seibertron.com review! If you're a fan of the covers, make sure to also check out our interview with artist Ken Christiansen.

Transformers Prime: Beast Hunters #8 [of 8]
Mike Johnson & Mairghread Scott (w) • Agustin Padilla & Atilio Rojo (a) • Ken Christiansen (c)
THE FIGHT FOR CYBERTRON! GRIMLOCK and his DINOBOTS meet up with old allies and try to stop the new threat to the planet. But as things get heated, the outcome becomes uncertain. A new beginning… or the end of the DINOBOTS?
FC • 32 pages • $3.99

It's kind of creeping me out. Really a turn-off at this thing, despite the fact that it is post Predacons Rising, which I really would like to continue on, considering the loose ends.
Re: IDW Transformers Prime: Beast Hunters #8 Preview (1534256)
Posted by PrymeStriker on December 10th, 2013 @ 11:22am CST
Interesting.

After Rage of the Dinobots Issue #3 (

), I've been refraining from this comic series. Though, now that it has made its connection with Transformers Prime in the form of telling the story afterwards, looks like I'll need to either pick this up or read the plot online.
Re: IDW Transformers Prime: Beast Hunters #8 Preview (1534262)
Posted by kaijuguy19 on December 10th, 2013 @ 11:47am CST
Yeah I don't like how the artist did the cast from the show. It shows that he does a better job at doing designs that are G1 inspired then with the Prime style. He got certain details on them off like the optics especially Arcee's very distinctive optics and pupils not to mention her mouth looks weird. While it's not horrible it doesn't capture most of the essence of the style used on the show. Hopefully if there's going to be another Prime based comic series they'll have an artist who does get the essence of the Prime style and get the details right.

As for the main story it's decent. While I would've preffered to see the Dinobots interact with the show cast on screen I still like that we're getting some interaction between them in SOME form like in a comic then not at all. I also like how Arcee and Grimlock seem to go back as being friends with each other somehow the way it's implied.

THE FIGHT FOR CYBERTRON! GRIMLOCK and his DINOBOTS meet up with old allies and try to stop the new threat to the planet. But as things get heated, the outcome becomes uncertain. A new beginning… or the end of the DINOBOTS?

And here we are. After seven issues, a previous mini-series, three seasons of a TV series and an epilogue, Beast Hunters actually ends in all its iterations. Mike Johnson writes the final issue, continuing the story where we left it last month, with plot by him and Mairghread Scott. I'm almost a little sad about it.

We're dealing with the Dinobots, Firestar, Chromia and a whole lotta bots on Cybertron and the whole of the cast of Forged and a grumpy Predacon, just as Arcee, Bulkhead and Bumblebee show up again, after the events of Predacons Rising. Or at least, that's what it looks like from the various references to 'Optimus' sacrifice'.

The dialogue does seem to have improved, and what I really liked was the fact that the characters didn't blurt out the whole story of Predacons Rising or the series, assuming the presence of a knowledgeable readership. Though as some have pointed out, how do the Dinobots not know what happened? How far were they from the actions of Unicron/Megatron and Optimus Prime?

All the recap we need

The story does have a conclusion to it, and a vague sense of closure, but I can't help but feel as though something is still missing from it. Maybe using the two-arc stories detracted from what could've been a long running plot, with a bit more to it. It promised so much to begin with!

Agustin Padilla on art doesn't disappoint, to be fair, though I've seen complaints about the main Prime cast. I like that we get to see a different incarnation of them, other than the show. I enjoy seeing different takes on the same character, especially after such a long time in the same aesthetic. I like the big vast landscapes, and even the simple urban backdrops.

My usual points of merit for the amazing colourwork and lettering still stand for this final issue too. Priscilla Tramontano does some brilliant work with shadows and different light sources, and keep an eye on the changing sky, in tone with the narration. Tom B. Long also gets more stage space, with a lot of LOUD NOISES part of the more action-packed scenes.

So while the artwork may not be anything surprising, or disappointing or overwhelming either way, it's good, it suits the story and its tone and works really well with the main cast. I've enjoyed the team's work on this run, as I've really enjoyed Ken Christiansen's covers. Maybe we'll see Padilla elsewhere?

All in all, it wasn't a bad issue, conclusion or series. My biggest complaint was the fact that, for me, it didn't live up to the first two issues and what they had set out to do. I would probably not have read this at all, had they not been as good. But the series was good, not amazingly so, but good, with a warm glow at the end. And I really hope to see Scott working on more comics.

As I've said above, there have been a few minor complaints about the series, in terms of art too - but personally I never had that bother me as much. I think Padilla, Tramontano and Long fitted the themes and tones of the stories told perfectly. I'd be interested to see them work with other arts and colours, even if just out of curiosity, but a sketchy Grimlock will always look good to me!

Also I know this sounds odd but do any of the Dinobots and/or any of the show character get killed off or do I have to ind out by reading it for myself?
Re: IDW Transformers Prime: Beast Hunters #8 Preview (1534524)
Posted by Va'al on December 11th, 2013 @ 12:20pm CST

Also I know this sounds odd but do any of the Dinobots and/or any of the show character get killed off or do I have to ind out by reading it for myself?

Thanks! I dedicate it to caffeine!

As for your question: no one dies in this issue - not even the Predacon, who only gets trapped with no escape.