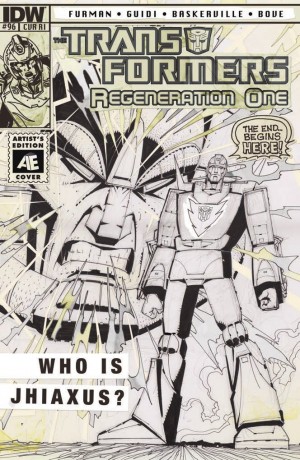 ZERO INITIATIVE! As RODIMUS PRIME urgently struggles to comprehend the what, why, and wherefore of SPIKE WITWICKY, GALVATRON, JHIAXUS, and a DARK MATRIX creature, and specifically how they contribute to the final dissolution of time, space and everything in between! Unless NIGHTBEAT and BUMBLEBEE can shake loose some answers, the future—is cancelled.

Oh and Starscream shows up, I guess

We've had adventures in time and space, we've had Hot Rod become Rodimus Prime, we've had Bludgeon dying his death, Galvatron fighting Ultra Magnus - it is now time to start dragging them all together, into the final arc of Transformers: ReGeneration One. This is it, people. This is the actual end. Again.

Aw, he looks so sad

Simon Furman at the helm (duh) we get a story that ties together the events of the past arc and Issue Zero, attempting to neatly place everything in its own space, while still making sense of the whole. More or less. It's good to get back to Spike, actually, and his resentment towards Cybertronians, and I am interesting to see if it will play any actual impactful role in the plot to come.

Though at times the dialogue and interaction between the two 'main' characters, Bumblebee and Nightbeat, can feel a bit G1esque at its most childish, the older readers will definitely enjoy some of the references, even if not direct ones. And by 'main' I mean the ones teased in the solicits, as Rodimus still takes the spotlight.

Gee, kids! What fun we'll have!

Furman does a really good job with Rodimus, especially by using the characters around him to help flesh out his newfound leader personality and the burden of responsibilities that come with it -- and then he garbles the gurgling waters by throwing in all the plot elements he needs from Zero Space in the final two acts of the issue. Buckle up. It gets bumpy.

Guido Guidi is still going strong, though with some very marked differences between the opening pages and the rest of the issue. We get to see a variety of styles and poses, all about different cast members, organic, mech and both together, which is always good, and the final page is something magnificent. But after this issue, the one word that to me describes Guidi's work is FACE. He loves giant faces. He really really does.

Stephen Baskerville does some good stuff with Guidi's pencils, and works on finishes in the later pages. He's a master chameleon, adding just that little touch of his own to his blend-in inks. And of course, JP Bove glistens again with his amazing colours, as we've seen in Issue Zero. I'll stop before going into full-on gushing.

Chris Mowry on letters does a brilliant job too, completing but not covering the action, and helping out with the character's voices. The artistic team on the issue does a really good job of working with the script, and it always knocks up the enjoyment of the story. And don't miss out on the covers - Geoff Senior and Guidi dazzle once again!

As a first issue of a final arc it does all it needs to do, and does it well. We may be getting tired of the 'beginning of the end of the beginning of the..' trope, but hey, it's true, and at least this is the *actual* end. The dialogue can be a bit.. Furmanesque, including Furmanisms, but it's what I've come to expect.

The art is always brilliant, from pencils to inks to colours to letters, and really helps deliver a comic that could feel very out of place in the newer readership. I am actually really intrigued as to what is to come, and will be looking forward, trepidantly, to next month. You coming along?

Bounti76 wrote:Transformers "drinking" in a "bar"?

Bounti76 wrote:Transformers "drinking" in a "bar"?

Have you read the vintage UK comics?

I haven't, actually. The closest I came was issue 33? 34? when the "Man of Iron" story was printed in the U.S., and it didn't strike me as all that interesting. Then, as you're well aware, I dropped off about a year or so later and didn't come back to it until '07.

I pointed out the drinking in a bar to highlight how silly I think a lot of the IDW stuff is. To me, it's too human a characteristic for giant robots from outer space to have. They don't need to eat or drink or breathe to survive, so why would they pick up that human of an activity? Then add in their goofy antics juxtaposed alonside with serious drama and it's just too much for me to suspend my disbelief.
Re: IDW Transformers: ReGeneration One #96 Review (1531980)
Posted by Bounti76 on November 27th, 2013 @ 4:07am CST

Va'al wrote:I clearly disagree with all three of you, sorry.

Va'al, I actually enjoy ReGeneration One, and count down the days until the next one. I don't have any major issues with it at all, really. It's the first time I've actually bought a comic book since the late 80s. If you're talking about disagreeing with the IDW-verse, then we'll have to keep agreeing to disagree.

Seibertron wrote:Frustrated, disappointed and unfortunately very bummed. This was not what I wanted. All Regeneration has done is confirmed an opinion I had formed back in high school while reading Generation 2. Furman is at his worst with Transformers when he's given free reins to do whatever he wants versus him being at his best with Transformers when he has to work within the confines of Hasbro or editors telling him what he has to accomplish. His best work was his run on the US comics from 56 through 80. Some of my favorite Transformers comics to this day! The UK stuff was great as well. But Generation 2, the IDW stuff, and Regeneration are just not for me.

G2 is IMHO Furman's best US TF series and is the series that needs a proper conclusion. What has bummed me about Regeneration One is the fact that it throws Furman's best work under the bus and then runs over it, backs up and runs over it again for good messure. Sure he takes elements from TFUK and G2 but at this point in my life I don't want elements from G2 I want a proper and real ending to G2 which is the ONLY TF series I wanted to be brought back.

I will admit that I haven't read all the UK series (I've bought and read all the Titan reprint books) but I've read the celebrated stories Traget: 2006, Fallen Angel, Space Pirates, Time Wars, Earthforce, and so on)and I agree that Furman's best work is when he has restraints placed on him by Hasbro and the publisher, and what makes his Marvel UK work so outstanding is he told hs stories in 8-16 pages, and they are still better than most of his US work.
Re: IDW Transformers: ReGeneration One #96 Review (1532347)
Posted by Rodimus Prime on November 29th, 2013 @ 3:04am CST

Cyberstrike wrote:G2 is IMHO Furman's best US TF series and is the series that needs a proper conclusion. What has bummed me about Regeneration One is the fact that it throws Furman's best work under the bus and then runs over it, backs up and runs over it again.

Though wasn't there some sort of work by Furman that did conclude the story somewhat? IIRC it was circulated at some of the conventions.

Either way, ReGen is a hollow shell of what he did in Marvel #56-80 and G2. He's trying to redo the story of G2, and it's dumb. If anything, he could have fit ReGen in between G1 and G2, and not skip 21 years in the story, like Ryan said.