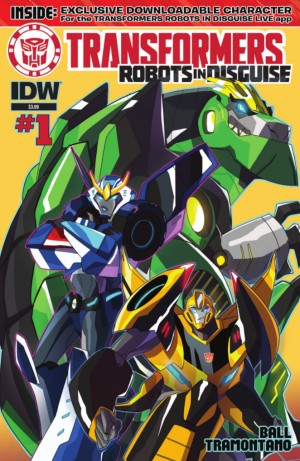 News for the weekend, thanks to Newsarama posting their previews of next week's IDW Publishing Transformers comics - starting with the first issue of the parallel series to the animated tv series Robots in Disguise. Check out the full preview below, and come back next week for a quick review of this younger reader series!

Transformers: Robots in Disguise Animated #1—SPOTLIGHT
Georgia Ball (w) • Priscilla Tramontano (a & c)
GO TEAM ’BEE! BUMBLEBEE leads an all-star team of AUTOBOTS to Earth to find rogue DECEPTICONS… but in this all-new story based on the hit Cartoon Network animated series, they find more than… they bargained for! (You thought we were going to say “meets the eye,” didn’t you?
FC • 32 pages • $3.99

Bullet points:
The hit cartoon comes to comics as only IDW and Hasbro can do!
Scan the shield with your mobile device to unlock an EXCLUSIVE character for the TRANSFORMERS: ROBOTS IN DISGUISE APP!
One of Five Featured First issues in July! One every week!
As seen on Free Comic Book Day!

Synopsis
GO TEAM ’BEE! BUMBLEBEE leads an all-star team of AUTOBOTS to Earth to find rogue DECEPTICONS… but in this all-new story based on the hit Cartoon Network animated series, they find more than… they bargained for! (You thought we were going to say “meets the eye,” didn’t you?)

After the Free Comic Book Day almost one-off issue by John Barber, new writer Georgia Ball has taken on the task of keeping this series up and going, with a new angle on the almost over first seasons of the new animated show Transformers: Robots in Disguise. And the angle is probably the closest we'll ever get to some continuity with Prime - but how does the rest of the series look with its first issue down? Read on!

What readers need to keep in mind is that this comic series is aimed at a very similar target audience as the cartoon, and will not be playing into the wider TFverse that most of the other IDW titles are exploring right now. That said, the vibrancy and humour of the series is deftly transposed from screen to page, even with the monster of the week formula that only worked for so long in the show.

What Ball's writing brings, along with some really silly jokes (which I loved, I won't lie), is also an interesting look, perhaps even better than the show did, at Bumblebee's discomfort with his position as leader, the unruliness of his 'team' - and the feeling of utter betrayal arising from the final scenes in the book.

A lot of the work done by Ball's script, both on the lighthearted and serious sides of the coin, is wonderfully heightened by Priscilla Tramontano's excellent visual rendition, showcasing a variety of expressions, body language interactions, panel dispositions and layouts, and just a general sense of *fun*!

Tramontano's colours, too, are sleek, stunning and fun, the characters are fun, are obviously having fun, and so is the artist/colourist! We get references to the wider IDWverse (with MTMTE's My First Blaster making an appearance early on in the issue), and some always excellent lettering from Tom B. Long, who can play around with a lot more sounds than usual. And two great tone-catching covers, by Tramontano and Travis Sengaus/Josh Burcham (thumbnailed).

Given the target audience, the timescale of the comic compared to the show, and what the FBCD issue had set up, this is an excellent debut for a younger reader series, one that ensures to keep the light side of the dynamics between the characters on the show, pokes some fun around at things, and includes the excellent Grimlock and running gags - including the no-nonsense general recap - without driving them into the ground.

The Decepticon sticker! The Blaster! The teeth!

Ball and Tramontano are set to bring a fresher look at some of the moanings of the older readership, with the ending of both issue #0 and #1 just enough to keep us intrigued while the actual target fully revel in the (I'm running out of words to say) fun! Worth picking up for a new reader, for the art direction and colours, and always worth it for the bouncing dialogue, . And dinobot.

Re: IDW Transformers: Robots in Disguise #1 Full Preview (1712750)
Posted by ScottyP on July 24th, 2015 @ 8:28am CDT
Some additional fun Easter Eggs along with the MFB, particularly cool is the team playing "Return of Convoy" on the last page.

Also, app code inside the book that unlocks a "Cybertron Underbite" in the game, which is just Underbite with a slightly different color scheme, but it's still a neat touch. Wonder if that will keep up as a thing in further issues?
Re: IDW Transformers: Robots in Disguise #1 Full Preview (1712798)
Posted by PrymeStriker on July 24th, 2015 @ 10:50am CDT


What are you talking about?


Optimus smiles quite a bit on Prime not every episode but he does smile.

She has her tongue sticking out.

She has her tongue sticking out.


Nope its lipstick such as her redesign says Sabrblade wrote:Then them's sure some goofy big pink lips that she never had in show.

Description
ROAD RAGE! While a DECEPTICON called TRANSIT wreaks havoc on afternoon commutes, Team Bee gets an unexpected visit… but will these new rivals combine forces without trusting each other?

You could tell them they're 20 foot costumes and no repercussions would be had. Little to much blood of Unicron in the water pipes in Crown City, if you ask me.
Re: IDW Transformers: Robots in Disguise #1 Full Preview (1718170)
Posted by D-Maximal_Primal on August 14th, 2015 @ 3:11pm CDT
Those poor humans are in for a ride!