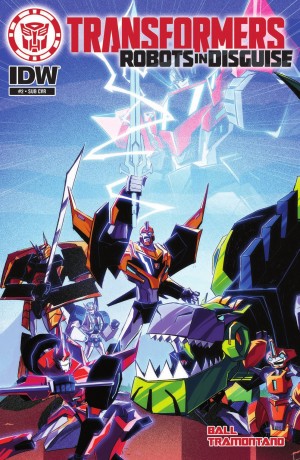 Synopsis
ROAD RAGE! While a DECEPTICON called TRANSIT wreaks havoc on afternoon commutes, Team Bee gets an unexpected visit… but will these new rivals combine forces without trusting each other?

Can they even deal?

With only a couple of weeks left until the end of season one of the animated series, the second issue of Robots in Disguise still falls a little behind plot-wise, but Georgia Ball delivers an entertaining, intriguing and suspenseful enough script to keep interest even in older readers.

After my own heart, the humour - a Cybertronian perspective on Earthling behaviour, media and general popular culture - allows for a number of puns, plays on concepts, wordplay via Fixit's pixlexia (yes yes yes I know that's not it but bear with me). All within a frame that does not jar with the silliness, at all.

Additionally, it keeps the light side in the running mystery we had been made aware of since the FCBD issue #0. While team Prime does make its appearance, and that is not spoiling anything, something else is definitely afoot with the various cast members, and Ultra Magnus in particular. Plus another special cameo, too...

Priscilla Tramontano delivers an excellent arrangement of panels - though I might have some comments at a later stage on the fluidity of the layouts - with some fan-tastic cameos from across the multiple incarnations of the Transformers fictions, not only Prime. Plus, we get some magnificent expressivity across the entire board, from background to main cast.

You wanted a colourist? Well, you get three, as Tramontano is joined by the Joshes, Perez and Burcham, in colouring in her own linework. And as much as they usually have their own identifiable styles, the transitions and collaboration here are strikingly fluid. Which is never a bad thing, and leads to some excellently vibrant pages, in tone with the series.

Also, a title such as this one allow, nay, calls for some fun on the fonts and letters side of things, and Tom B. Long does not disappoint. Enjoying the multiple opportunities to play with soundwords and squiggles, Long adds the finishing touches of lightness even where scenes may get more serious. Cover-wise, Burcham returns from interior colours to overall cover work in the Subscription variant (thumbnailed), while Tramontano still has the great main cover we've seen for a while now.

Again, as for last month and the first issue, the target audience of the book is obvious, and may deter some of the older readers (who do have three other series at least, to be fair) - but what Ball brings to the table is the same good blend of lighthearted humour with enough of a twist to keep the mind intrigued and willing to go along for the (bus)ride.

And of course, the visual result of Tramontano, Perez, Burcham and Long are a feast for the optic sensors, too. The vibrancy, cameos, hints, slapstick and more subtle humour are excellently enjoyable, and work well as a parallel reflection of the animated series - obviously with its own take, and all the better for it.

Blackrock Entertainment presents: Five Nights at Fixit's
Re: IDW Transformers: Robots in Disguise #2 Review (1731846)
Posted by Va'al on October 6th, 2015 @ 2:02am CDT
This week's release from IDW Publishing sees the continuation of the parallel adventures of the cast of both Transformers Robots in Disguise and Transformers: Prime, as Bumblebee finds himself between the two teams. Come back on Wednesday for the Seibertron.com review!

Transformers: Robots in Disguise Animated #3
Georgia Ball (w) • Priscilla Tramontano (a & c)
BUMBLEBEE’s investigation of a mysterious DECEPTICON’s past uncovers a new lead… but unraveling this mystery may not reveal the answer he wants to hear.
FC • 32 pages • $3.99

Re: IDW Transformers: Robots in Disguise #2 Review (1731881)
Posted by psj333 on October 6th, 2015 @ 9:23am CDT
Upon viewing the RID2015 #3 of the comic book online, I've recently noticed that Steeljaw has just recently formed his own army by recruiting Springload, Bisk, and along many others, which leads me to believe that it is expected that the captured Decepticons would soon escape once again and join Steeljaw's group in order for him to form a powerful Decepticon army in Season 2, as shown in the comics. But what is really interesting to me is that there is another female Decepticon in the comic under the name, Overhead, which I don't know if she is really Terrashock's girlfriend or a direct relative of his. What I do already know is that Overhead is identical to that of Terrashock, only pink instead of orange. I do have a strong feeling that Overhead will likely appear in Season 2, have Terrashock released, and finally get revenge on the Autobots for what they had done to him. Do you really think that 3rd issue of this comic book will be most closely related to what will happen in Season 2? Ever since that the Cons were already and before prisoners, they were not organized, but I do believe that in Season 2, they definitely will be, thanks to Steeljaw and Kickback.

Re: IDW Transformers: Robots in Disguise #2 Review (1731882)
Posted by D-Maximal_Primal on October 6th, 2015 @ 9:28am CDT
From what this preview has, I'm more inclined to say they simply share a body type, like Prowl, Bluestreak and Smokescreen, not any others sort of thing. Fixit even says they are buffaloids, a specific body style

I’ve been waiting for this question to come along so I can answer - Yes, we were not given the green light to continue the comic past six issues. I’m turning in the script for #6 tomorrow and it will be the last issue in the regular series.

There are a lot of factors that went into this:

1. Almost all comics are pitched in short sets even if they are solicited as ongoing.

2. Comics are sold to retailers, not fans.

3. It was not digital-first.

All of that said, the reviews were good and the fan response couldn’t have made me happier. Priscilla did a brilliant job and made everything easy. Hasbro LOVED this book and it’s possible more of it could come out in the future but I can’t give out any details! Thank you all so much for posting about the comic, sending me questions and letting me get to know you.

D-Maximus_Prime wrote:This is a real shame. I was enjoying this too

I did too :/ sad that its ending but I guess I could save some money but oh well I like RID just if it hadn't been somany repaints it probably would of been a lot popular but i can understadn that the repaints & the cw repaints were for the RID decepticons/etc and the Titan's Returns Figures
Re: IDW Transformers: Robots in Disguise #2 Review (1735954)
Posted by Carnivius_Prime on October 22nd, 2015 @ 3:01am CDT

Break wrote:I think the problem the comic had is that the toyline sucks. I regularly go to Wal-Mart and Meijer to check for Combiner Wars, and rarely ever see a limb stick around, but boy do I see fully stocked RID stuff.

Am no fan of RiD but I see lots of CW Drag Strip always clogging up the shelves as well as at least one of the Aerialbots (I forget which). And if we count torsos then Silverbolt is always available too.
Re: IDW Transformers: Robots in Disguise #2 Review (1735959)
Posted by Hans on October 22nd, 2015 @ 3:36am CDT

misfire19d wrote:And yet transformers vs G.I. Joe continues to torment me. I'm living in a world I don't understand.

Well... I would like to point out that this (monthly) series was also missing from the most recent solicitations. We only saw former-RiD, MtMtE and Wreckers. It might just mean that they're skipping a month with the Joe book, but the ending of current-RiD was also unannounced, so... Who knows?
Re: IDW Transformers: Robots in Disguise #2 Review (1736153)
Posted by o.supreme on October 22nd, 2015 @ 4:37pm CDT
The current TF vs. GI Joe was developed solely for the fandom, even though I think it is pretty pointless as well, it continues... However with RID

We pretty much saw this coming from the day the Animated series was set to be on CN rather than The HUB - CN, for some reason, hates action cartoons now. All their shows are dumbass flash animated comedies solicited to children with ADD. If it is an action show, it better darn well sell a TON of toys. Apparently RiD isn't hitting the mark. First season 2 is cut from 26 to 19 episodes, now this. It sucks, but we can't say we didn't see this coming.

Well at least fans of IDW's Transformers self-titled Comic can *maybe* rejoice, probably about this time next year, IDW can get the RiD subtitle back on that book, since RiD (2015) will be RIP.
Re: IDW Transformers: Robots in Disguise #2 Review (1736161)
Posted by Sabrblade on October 22nd, 2015 @ 4:57pm CDT

That is not confirmed. All we know from that number is that that's how many episodes have been produced so far, not necessarily the final number.
Click here to view additional comments about this topic at the Energon Pub Forums ...