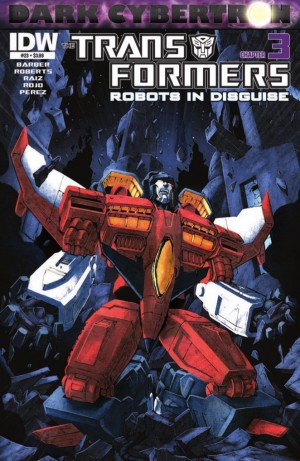 The second piece from IDW Publishing this week is for the third chapter of the Dark Cybertron event - Robots in Disguise #23! Check out the full preview below, and drop by later for the Seibertron.com review.

Hehe. Anyway, I'm not liking the "previously on Transformers" bit. I wish it were more of a quickly narrated recap rather than a bunch of scenes vaguely related to each other. Hmmm.
Re: IDW Transformers: Robots in Disguise #23 (Dark Cybertron 3) Preview (1531977)
Posted by Va'al on November 27th, 2013 @ 3:27am CST
Winners & Losers
(Spoiler free-ish)

STARSCREAM UNDER FIRE! The all-new, all-redesigned, all-leader-of-the-planet STARSCREAM makes his move! Will he stand up for CYBERTRON, or fall under SHOCKWAVE’s onslaught? Meanwhile—the Lost Light receives a desperate call from help from an old friend!

PREVIOUSLY, in the reviews: People in the Dead Universe, people on Cybertron, people on the Lost Light! Orion Pax, Starscream, Ultra Magnus! Got it? Got it! (!) But, on the other hand, the Roll Call page has shifted, and that's a nifty little placeholder, actually, giving a sense of the different scenes and their cast.

Dead people in the universe?

John Barber and James Roberts keep weaving the tale of this previously unknown prophecy telling of the advent of a Dark Cybertron, with cyclopses, titans, comets and the such. So it all makes sense. Or does it? I'm not sure how far I can buy into a long-standing legend that has never really been heard of before, though.

I like what they're doing with Rattrap, even the very explicit reveals about his character or potential ulterior motives. What I also like is the Magnus-driven plot aboard the Lost Light, pointing to a different use of his character, now that all the layers have been sliced off. And Brainstorm is still great.

The plot is actually unexpected at this point, I was not anticipating the Necrotitan's involvement so soon, nor was I expecting its aftermath so quickly. I am extremely intrigued by what on earth is Shockwave planning, that's for sure. Will we ever know?

I feel a lot better about the artwork in this issue, even if it is the same two artists: James Raiz for Lost Light Scenes, Atilio Rojo for Cybertron scenes. The latter's linework looks much better, inexplicably, since last week's issue, and there are some brilliant shots of some (sigh) 'old friends'. Raiz really works well with Magnus and Brainstorm, and the inks don't look as dark as previously, though it can get a bit cluttered at times.

Where we're going, we don't need no chairs

I was going to say something about the colours and how they work with the lines but HOLY HOTPANTS BATMAN. Josh Perez takes splash and spreads to new levels, and you'll see what I mean when you read it! The colours are good all over, but those scenes are ridiculously good. Tom B. Long is equally impressive in his lettering, and never gets in the way unless needed. But when he is, he adds some great personality to the noises and sounds.

As I said, the two different styles work a lot better for me in this issue, for some reason. Maybe it's the script transition, maybe it's the colours, maybe it's the tone getting darker, but whatever it is, it works. Make sure to check out Nick Roche's cover B for some added goodness, too.

It's getting there, oh is it getting there. We're finally clocking into what might be happening, we get some good action out of it, the characters are being set.. and yet, it feels like we're going back to previous Barber-isms. We'll have to see how it all plays out, but I am not impressed or surprised at the final pages, nor at the big event of the issue. Hm. I like it, but I'm annoyed at it, too.

The art seems to blend better for me, and Perez' work on the two styles definitely contributes to that. I'm glad we only have two artists this time round, and I'd rather this were the case from here on. I have a feeling this issue will only pass readers' judgement once we see how the aftermath evolves.

Mindmaster wrote:So what's the prophecy I keep hearing about? I remember seeing a panel that said "...and stars shall scream" (obviously referencing Starscream), but what's the rest?

It's slowly being teased. I think you should read the comics, if you want to keep up.

Mindmaster wrote:So what's the prophecy I keep hearing about? I remember seeing a panel that said "...and stars shall scream" (obviously referencing Starscream), but what's the rest?

It's slowly being teased. I think you should read the comics, if you want to keep up.

As soon as I figure out where in my town I can get them, and if I can get Volumes with each series.
Re: IDW Transformers: Robots in Disguise #23 (Dark Cybertron 3) Preview (1532013)
Posted by megatronus on November 27th, 2013 @ 10:20am CST
I got the first 5 trade paperbacks of MTMTE that I need to read... I guess I need to order RID too if I want to know the whole story.

That one caught me off guard. I didn't think it'd work on someone dead that long.