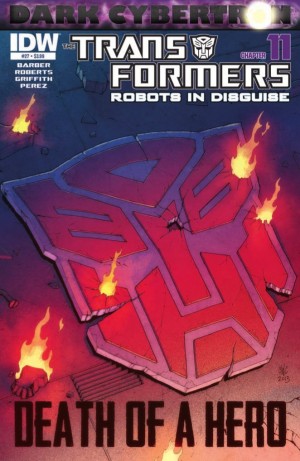 We told you this month was going to be a big one for Transformers over at IDW Publishing, but we'll start with the lesser of two BIG ONES. Check out below the full preview for the penultimate chapter in the Dark Cybertron event: Robots in Disguise #27! And make sure you come back tomorrow for the Seibertron.com review.

Transformers: Robots in Disguise #27: Dark Cybertron Part 11 (of 12)
John Barber & James Roberts (w) • Andrew Griffith (a) • Casey W. Coller (c)
DEATH OF A HERO! BUMBLEBEE! RODIMUS! ULTRA MAGNUS! PROWL! One will fall in final battle with SHOCKWAVE! This one is for all the marbles, folks—it just doesn’t get any bigger than this!
FC • 32 pages • $3.99

While that would make several thousand Transformer fans just absolutely thrilled, that would be bad from a marketing standpoint since he's got two IDW based action figures right now. 'Bee and Goldbug (Goldfire...whatever the hell they're calling him)

Hate to say it folks but say goodbye to Prowl. That's where I'm placing my bet. The runner-up would be Rodimus but only if the story takes a weird twist and he somehow finds a way to travel some diminishing transport stream from the DU back into Shockwave and get deposited on his butt at Shockwave's feet on Cybertron. Could easily happen the way this whole arc is going but my vote is still on Prowl being the one to try to take down Shockwave and paying the ultimate price for his attempt.

...although in the Rodimus scenario there's a chance that he (Rodimus) could die and be "reborn" the next issue since Shockwave is being infused with the energy of all the Ore's. This COULD mean that a trip "through" him from the DU to Cybertron would leave a residue of the Regeneration Ore on Rodsy and he could bounce back from a normally life-ending assault. Just a theory...
Re: IDW Transformers: Robots in Disguise #27 (DC 11) Preview (1558572)
Posted by Deathscythetransform on March 18th, 2014 @ 4:09pm CDT
I sure hope its bumblebee

nope, i think mor of prowl or even magnus...
Re: IDW Transformers: Robots in Disguise #27 (DC 11) Preview (1558598)
Posted by Nemesis Maximo on March 18th, 2014 @ 6:20pm CDT
Bumblebee:
First, he's kinda the flagship Transformers Character. Even if we want Optimus to be that character, he's known for dying. Not to mention, Hasbro has invested a lot into their golden rod; becoming the new leader in Prime, being the poster boy for the movies, etc.

However, it could be the ultimate "F*** you!" to him if he dies trying to save his world after all the scrap he's been through in RID, not to mention that our recent preview of Windblade shows us that Starscream is still at the helm of Cybertron after all this.

Ultra Magnus:
He's already had a few brushes with death in MTMTE, so I think him dying would be to beat a dead horse. Of course, James Roberts does like to tear our hearts out, and killing Mags for reals would definitely do just that.

Prowl:
I think (or rather, hope) he's got more to do in the coming months. We found out relatively recently that he's the "boss" of Skids and Getaway in the Diplomatic Ops Group, and he has a lot to make up for after his mind controlled stint. But again, these people like to cause us pain.

Synopsis
DEATH OF A HERO! BUMBLEBEE! RODIMUS! ULTRA MAGNUS! PROWL! One will fall in final battle with SHOCKWAVE! This one is for all the marbles, folks—it just doesn’t get any bigger than this!

We're almost there, and quite an almost it is. John Barber and James Roberts keep building and building and building, something is going to have to tear (other than the space-time continuum). And here it is. But does it really not get any bigger than this? Read on to find out more, and yet not spoiling the book. Ish. Where I can.

Ok, those are pretty big

Shockwave really takes the spotlight once more, and understandably so, now that we know his plans for everything becoming one (sound familiar?). But the rest of the cast are not neglected, and there are plenty of good moments for individuals throughout the issue overall. Including both Prowl and Bumblebee, continuing from last week's MTMTE.

He's a funny fella, too

And there's a lot of strategy in the fight, too. We get to see Autobots, NAILs and Decepticons actually working together, in some cases quite literally uniting forces, and there are some really good points being made about the blurred boundaries between 'good' and 'evil' - as the two series, but especially RiD has made clear for a while now.

It felt as though it didn't pack as much of a punch as its predecessor MTMTE #27, at least in terms of action. But is the death unexpected? Yes. Completely by surprise? No. But yes, unexpected in terms of the overall scheme of things. And it kind of works, actually. It may not be Pipes and Rewind, but it works.

We've left the Dead Universe pretty much behind us (or have we?), so one artist has been left to rest too - and Andrew Griffith takes centre stage. And it's a good stage to be on. His Shockwave is magnificent, for one thing. There are not one, but two amazing double page spreads, and an impressive splash page, none of which I can really show. But they're good.

Here's an ensemble instead

Let's take a moment to deal with the stratospheric work that colourist Josh Perez has been doing in this event run, shall we? He manages time, styles, places and lights amazingly throughout the whole issue just as he has done so far. Some of the wider shots would really not makes sense without the colours, and those that do just look even better.

Tom B. Long is still on letters, and there's a bit more than last time to go on, and brilliant as usual - some defining moments are really enhanced by the soundcolours. Three covers overall, and other than excellent regulars Phil Jimenez and Romulo Fajardo Jr, Casey Coller and Joana Lafuente, we have the quite stunning Bludgeon by Marcelo Matere and Priscilla Tramontano (see thumbnail!).

Let's see then, penultimate chapter: death death death fighting alliances fight fight fight jokes talk talk fight death. One of which is really meaningful to the story. As I said above, on first reading it did not pack as much of a punch as chapter 10 did, but it may have also been due to *everything* happening at the same time. Including the Jhiaxus toy explanation.

I am really really interested to see what on earth (or Cybertron) the aftermath of this issue will be in the 'conclusion' next issue, because there are a lot of things to be answered for. The issue looks stunning, too, thanks to Griffith, Perez and Long, and it really helps move the story along when the story is mostly action - and keep it in the present when it's needed. It's doing all good things on a different plane than the last issue, so it gets the same mark; but they are not the same book.

A good Penultimate issue. Finally we get to see the kind of damage Bludgeon can do in his pretender shell. He is definitely quite the handful. Also still loving the Bee and Megatron bits. They make quite the odd couple dont they? Kind of remind me of Londo and G'Kar from Babylon 5 seasons 4-5. I would have liked to see some of these matchups resolved though. For next issue we got Starscream Vs Jhiaxus, Monstructor Vs Devestator (ummmmmm, spoiler?) Megatron Vs Shockwave. Cybertron Vs the Ammonites, and one other group matchup I wont spoil. Needless to say thats a bit much for one issue, I get the feeling its going to end in a cramped and rushed way. I hope not, but with that much ground to cover... I'm pretty nervous.
Re: IDW Transformers: Robots in Disguise #27 (DC 11) Preview (1558790)
Posted by Joetx on March 19th, 2014 @ 4:36pm CDT

True, but Metroplex should also be able to step on Monstructor or squeeze him with one hand.

Seconded - 'Plex is the size of a large space cruiser; Monstructor is three-and-a-half robots tall.

True, but Metroplex should also be able to step on Monstructor or squeeze him with one hand.

Seconded - 'Plex is the size of a large space cruiser; Monstructor is three-and-a-half robots tall.

Of course, i would believe he has a similar ability to the Hulk, in that he grows bigger the angrier he gets.

True, but then that leaves room for the Ammonites to move in and do a lot more damage. Or he ignores Monstructor and fights off the Ammonites and leaves monstructor to do some damage. So yah, Its not so much as monstructor being a threat, just adding to the damage thats already being dealt.