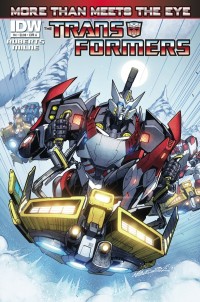 Fresh from our friends at IDW Publishing here are their Transformers solicitations for April 2012:


Take a look at the covers and descriptions below!

Transformers: More Than Meets The Eye Ongoing #4
James Roberts (w) • Alex Milne (a) • Milne, Nick Roche (c)
DANGER IN SPACE! Investigating the abandoned AUTOBOT facility on DELPHI—one-time home of fan-favorites THE WRECKERS—RATCHET uncovers a danger greater than he’s ever faced… and the return of a character long thought lost! Will this bring them closer to their goal of finding the Knights of Cyberton—or kill them?!
FC • 32 pages • $3.99

Transformers: Robots in Disguise Ongoing #4
John Barber (w) • Andrew Griffith (a) • Casey Coller, Griffith (c)
PROWL UNCHAINED! In what’s sure to be the most shocking Transformers comic of 2012—PROWL defends the fledgling government of CYBERTRON against the DECEPTICONS. But how far will he go—and who will chose to stand by his side? The answers will shock you!
FC • 32 pages • $3.99

Bullet points:
• One Universe! Two Comics!
• The powerful new direction of TRANSFORMERS continues!
• You wouldn’t believe the ending to this issue if we told you!

Infestation 2 #2 (of 2)
Duane Swierczynski (w) • David Messina (a) • Alex Garner (c)
The mind-bending terror of the Elder Gods has infested countless universes. Reality, and humanity itself, hang in the balance. Now it all comes down the final battle. C.V.O. is scattered across America, and one of their own may be the key to stoping the threat once and for all—but not without a tremendous sacrifice. Danger Girl and others are on hand to help, but will it be enough?
FC • 32 pages • $3.99

BeastProwl wrote:That Infestation Cover's got me SERIOUSLY confused. And interested. What's it about?