IDW Transformers: Till All Are One Volume 1 Listing Online 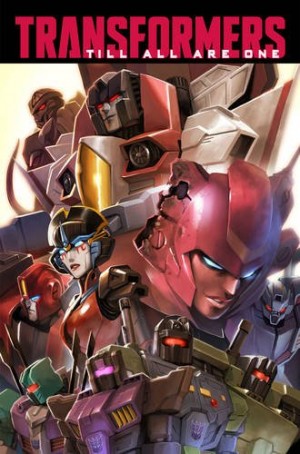 The second IDW Publishing listing on online retailer Amazon is for the first volume of the new ongoing Transformers: Till All Are One, by partners in crime Mairghread Scott and Sara Pitre-Durocher, expected for release in December 2016, and collecting the first story arc (issues 1-4) of the series. Check it out below, and here for the listing!

Starscream rules Cybertron. He and Windblade vie for control of the Council of Worlds, each aligning themselves with as many long-lost colonies as they can. But Starscream's secret police keep increasing the tension, destablizing the fragile peace that has been established. Collects issues #1-4.

That Bot wrote:There's going to be 2 or 3 variant covers as always. Hopefully there will be one you like.

Not for the trades, unfortunately! Though the one we newsed is preliminary, it's highly likely that it will be the one that sticks, given it was the main artist's main cover for the first issue. We'll see.
Re: IDW Transformers: Till All Are One Volume 1 Listing Online (1814775)
Posted by D-Maximal_Primal on August 12th, 2016 @ 9:58pm CDT
Newsarama has uploaded their second preview of the week, this time in the form of Till All Are One issue 3! In this issue, Windblade takes on the combaticons and the hunt for Swindle continues! Check out the full preview below and stay tuned next week for the Seibertron.com review!

Transformers: Till All Are One #3
Mairghread Scott (w) * Sara Pitre-Durocher (a & c)
WINDBLADE TURNS TRAITOR?! With the rise of the COMBATICON threat, STARSCREAM issues an ultimatum to WINDBLADE: do his-or everyone on Cybertron will learn her darkest secrets!
FC * 32 pages * $3.99
Bullet points:
* Will WINDBLADE betray her own ideals and become STARSCREAM's crony?
* Is ONSLAUGHT really the threat to world peace that STARSCREAM claims?
* And where in the name of the Primes is SWINDLE?!
* Sets the stage for next month's REVOLUTION!
* Variant cover by Thomas Deer!

If you like me now, you won't once I'm done with you.

Synopsis
WINDBLADE TURNS TRAITOR?! With the rise of the COMBATICON threat, STARSCREAM issues an ultimatum to WINDBLADE: do his - or everyone on Cybertron will learn her darkest secrets!

The shift from 'Windblade' to 'Till All Are One' is one that perfectly adapts to and suits the way in which the story, plots and cast are handled in this new series. The various characters each have their own path, and while they do cross at multiple intersections, it's refreshing to see them work both with and against each other so subterfugey.

There are some key players of course, in terms of how Mairghread Scott approaches the script, playing pivotal roles in the issue - especially the Combaticons. Individuals, well-rounded, well-scripted voices and characters that operate well on their own and as a team (when necessary), even with the Blast Off ...play from last issue.

The other excellent written bot is Ironhide, who seems to be channelling a lot more of his past/future self from the miniseries, Pax Cybertronia, and possible connections with the other comic out this week (and the one not out at all until the end of the month). Whatever is going to happen, and still with my tentative dislike of the ideology behind it, he's doing it well, and it's a good hook and tease.

The one thing I was not too keen on, and worth pointing out here, is the slight confusion with timelines and where this fits in the greater picture of the IDWverse. Even that, however, was solved again once reminded that the book was supposed to start in March, pre-Sins of the Wreckers. Brawl leaving the AHO arc makes sense again, as do other enigmatic events, and EVERYTHING IS FINE again.

Sara Pitre Durocher does some fantastic work in laying out some of the parallel scenes, between fighting and hacking, more fighting, some talking, a bit of fighting, and tensions running just a little higher between one of sides in the book. Plus, we get an actual montage. A training montage. With Ironhide and Blast Off. A Montage.

Not shown: the Montage

The colours are really well played too, in the vibrant approach that Joana Lafuente brings to the linework and layouts. The nice contrasts between night/day and under/overground have some great touches to them, too, and the fight scenes - as a juxtaposition to the Metroplex scenes with Chromia and Windblade - are given an added layer of dynamism.

Red is the colour of VIOLENCE

The fighting and training, along with Metroplex scenes, allow for some nice space in terms of lettering too, and Tom B. long delivers his neon magic once more (keep an eye out for the location/setting captions, too). As for the covers, we've seen the hauntingly good main one by Pitre Durocher for a while now, but both Alex Milne/Josh Perez and Thomas Teyowisonte Deer (this one thumbnailed) play around with the tone of the book, pitting the pawns under Starscream's control on the game board.

Things I have yet to figure out: Elita One's role in all of this. Obsidian is still a menacing presence, but much more in the background - what is the plan behind things? Rattrap - what does he have to do with everything? because he's stuck in the middle of it, always. Things I really enjoy: the Combaticons, all of them. More please. The breaking point that Windblade seems to be reaching with both Starscream and Chromia, on two different sides.

The book may have been a slow burner at first, but it's paying off, significantly, already. More tension, more political play, more teasing of something MUCH BIGGER (and maybe not even entirely intentional, going by my own speculation from the cover of #4), and more humour where you might not expect it. And a training montage, you guise.

And my favourite Vortex in the issue.

Kurona wrote:Swindle is brain-dead = Bruticus has a cripple for a leg. Discuss.

Kurona wrote:Swindle is brain-dead = Bruticus has a cripple for a leg. Discuss.

I'm wondering how that will work.

Kurona wrote:There is, funnily enough, a similar situation that happened with IDW Devastator - the constructicons combined... when Scrapper was still dead. Devastator literally had a dead leg and was crippled because of it.

I do remember that, which is why I wonder how this will work, but I believe this guys right:


Brakethrough wrote:We've seen from Prowl's run with the Constructicons that combining with others can lead to a sort of shared point of view and sympathy, maybe the hope Onslaught has is that combining with Swindle will jumpstart his brain module, using all of their memories of him much like how Rewind's storytelling group helped Rung in MTMTE.

I believe this will be right since Swindle is completely dead
Re: IDW Transformers: Till All Are One Volume 1 Listing Online (1823069)
Posted by Va'al on September 9th, 2016 @ 1:18am CDT
There has been a bit of a quiet spell on the comics front from IDW Publishing, but we do have a new three-page preview of the next Transformers: Till All Are One issue - the fourth - via the iTunes page for the book. You can check out the short look at a Bruticus in progress below, and get ready for its release in the next couple of weeks!

SWINDLE LIVES! And ONSLAUGHT knows the perfect way to unlock the secrets in his head. As the COMBATICONS rampage through Iacon, can IRONHIDE and his newly formed police force stop them before they annihilate STARSCREAM—and anyone else who gets in their way?