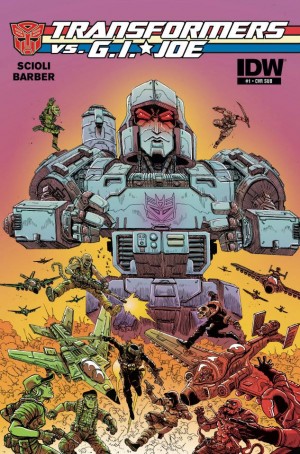 Courtesy of the official IDW Publishing Facebook page, we get a look at the subscription cover for issue #3 of the John Barber/Tom Scioli Transformers vs G.I. Joe ongoing - check out the Megatron-centric art below!

It was off putting at first, but by the time I reached the end of the comic I was sold.
Re: IDW Transformers vs. G.I. Joe #3 Subscription Cover (1592263)
Posted by Va'al on July 21st, 2014 @ 12:52pm CDT
The IDW comics have been taking a couple of breaks this month, but with this final week of July, they definitely catch up! Check out below a full preview,via Newsarama, for the first offering: the truly bonkers Transformers vs G.I. Joe #1! (And head back here on Wednesday to find out if we have finally formed an opinion on it..)

Transformers VS G.I. JOE #1—SPOTLIGHT
Tom Scioli & John Barber (w) • Scioli (a & c)
SPACE WAR I! Earth makes contact with an alien race—and G.I. JOE is on the front lines of first contact! But when the TRANSFORMERS arrive—their version of “peace” does not match our own…
FC • 32 pages • $3.99

But for younger or casual fans, it would look really childish and odd. Maybe after reading the trade paperbacks of all the 80s TF comics and the excellent UK series you could warm up to it and see the humor?
Re: IDW Transformers vs. G.I. Joe #3 Subscription Cover (1592489)
Posted by Va'al on July 22nd, 2014 @ 8:58am CDT
I'm still getting my head around it, with a mixture of amusement, bemusement and confusion.

It's just so wacky in its scope!
Re: IDW Transformers vs. G.I. Joe #3 Subscription Cover (1592490)
Posted by Darth Jumpy on July 22nd, 2014 @ 9:02am CDT
Ignoring the artwork, I enjoyed issue 0. The humor worked pretty well. I'll pick up this comic, but I do hope that they do something about the art eventually. I get that it is a homage, but the art that they are referencing never had this many issues, especially with the perspective.

Also, I hope that they stop making everything in red, including the speech bubbles, in the briefing room scenes. Trying to read black on dark red in this preview was just painful.
Re: IDW Transformers vs. G.I. Joe #3 Subscription Cover (1592494)
Posted by gothsaurus on July 22nd, 2014 @ 9:10am CDT
Yeah, I admit I kinda hated it until I read it. About 2/3 through I started to "get it" and by the end I was having a lot of fun. I think it's a good gimmick for a limited series. If they do an ongoing Joe/TF series, I'd want a serious reboot and some modern art.

That said, I really loved the older Dreamwave crossover that was so dark and painterly. It was really gritty. But I digress...
Re: IDW Transformers vs. G.I. Joe #3 Subscription Cover (1592496)
Posted by Va'al on July 22nd, 2014 @ 9:15am CDT
I'd agree on the mini-series idea, rather than ongoing. But we'll see what happens to it after the initial run.

Synopsis
SPACE WAR I! Earth makes contact with an alien race—and G.I. JOE is on the front lines of first contact! But when the TRANSFORMERS arrive—their version of “peace” does not match our own…

On a completely different note, artistically, thematically, tonally, from the concluding issue of Windblade... This week also marks the beginning of a new Transformers vs G.I. Joe ongoing from the mind and hands of John Barber and Tom Scioli, co-plotting and co-writing the whole run (as far as we know, at least). We've seen issue #0, but come along for a look at the actual start of a new thing right below here.

[Credit: Tigertrack is remotely helping out with this review, though all conclusions are my own.]

It's still completely out there. Nothing has shifted since Free Comic Book Day, as Barber and Scioli plot the arrival of Cybertronians onto Earth, as the Joes set out to meet a Decepticon delegation headed by Soundwave and the cassettes. Where is Cobra? Oh, they're there. Where are the Autobots? Do is it really matter at this point, with Soundwave taking centre stage?

Plot-wise, there's a simplicity which might turn some people off the book, almost going back to the original cartoon plots from the two series - but in comics form, revelling in the creative spaces left from a stripped down narrative. There are sight gags, wordplay moments, slapstick, and some quite good action sequences, too.

The countdown sequence in particular is well thought out, and really shows the decompressed, almost slowed down to the bare minimum approach that the writers are taking. And we end up picking up a plotline started in issue #0, almost to its conclusion, along with what I think is an extremely intriguing ending to the book. Both of them.

Ok. So Tom Scioli is taking care of absolutely everything here, from layouts to lines to inks to colours to lettering, this is his book definitely a lot more than Barber's, and it's his vision of the two franchises that we're seeing, with his artistic tendencies and influences coming into it - and that will work two ways with readers: yes, or no.

I can't see a middle ground, to be honest, the style does not allow for it. And I have to say, after getting my head round issue #0, I've come to enjoy this one a lot more than jumping into the cold deep end straight away - though I think another one to fully enjoy it. Credit note: even with Scioli on everything, I do want to make a note towards Chris Mowry's production work on this, especially the page design, and Carlos Guzman on editing, which cannot have been easy.

A sight to behold

As SDCC is coinciding with the launch of the new series in this first issue, multiple variant covers were to be expected; here's a list of what you can get: Rob Liefeld with Romulo Fajardo Jr, James Stokoe, several Tom Scioli ones, Jamie Tyndall with Ula Mos, interlocking, single, blank, GI Joe dominant, TF dominant - you name it! It's Liefeld and Fajardo in the thumbnail, in case you were wondering.

As we said in the double-team review of issue #0, this series is setting itself up to be completely bonkers, with a method in the madness. I can't stress this enough: it's not for everyone, it does not take itself seriously, but it does it with such a charm and clearly heartfelt research and execution of styles, references and planning that it will at least crack a smile.

I am still ambivalent about the artwork, as much as I do like the darker hues and overly filled panels, but it does fit the entire concept of the book from what I take from it - and my opinion quite definitely is not that of the entire comics staff! But if you're into your nostalgia pandering, your cosmic sagas, celebrations and parodying in parallel, this is definitely an issue for you - TF or Joe fan alike.

Every time I see this, I keep coming back to this: