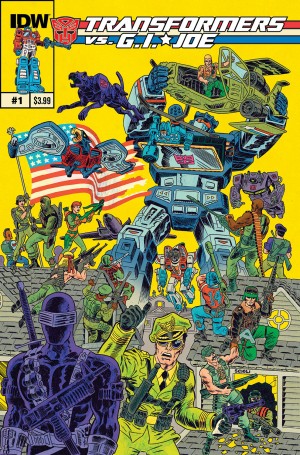 Next week sees the second issue of the IDW Publishing Transformers vs G.I. Joe ongoing crossover series, but Amazon.com already has a pre-order for the first trade paperback volume! Release expected in December, price currently at $15.77, more information below.

SPACE WAR I! Earth makes contact with an alien race - and G.I. JOE is on the front lines of first contact! But when the Transformers arrive, well, let's just say you've never seen TRANSFORMERS or G.I. JOE like this! Visionary comic book maker Tom Scioli (with Transformers fan-favorite John Barber in tow) combine two of the biggest names in entertainment into the surprise breakout hit of 2014!

This is the big hit? What happened to everyone loving Windblade?!


gothsaurus wrote:I think you have to be an older fan to really appreciate these... having read comics for a good 35 years, I can recognize that this art is homaging a different era of comics... and see it as the tongue-in-cheek, funny project it is.

But for younger or casual fans, it would look really childish and odd. Maybe after reading the trade paperbacks of all the 80s TF comics and the excellent UK series you could warm up to it and see the humor?

Plus you have to have been a fan of both Transformers and G.I. Joe for that long. I came in during Beast Wars and I never got into Joe except for Renegades, so this series is leaving me cold so far.

DanaCornZine wrote:This is seriously hideous in appearance. I like the idea that we see how some people got their injuries and modifications but I can't get past this artwork that looks like it's done by someone that has no concept of proportions, depth, and straight lines. Sadly, I've been sitting comics out for a few years because the price tag is too steep.

It's the writing that bothers me. It feels like plot and characterization take a backseat to trying to string together a bunch of in-jokes and one-liners.
Re: IDW Transformers vs. G.I. Joe Volume 1 Pre-Orders (1601740)
Posted by Va'al on August 25th, 2014 @ 2:36am CDT

This is the big hit? What happened to everyone loving Windblade?!

Outside of established TF readership, this comic is selling like ridiculously hot cakes.
The first issue went to multiple printings almost immediately, as they sold out at distributor level.

Re: IDW Transformers vs. G.I. Joe Volume 1 Pre-Orders (1601797)
Posted by gothsaurus on August 25th, 2014 @ 9:21am CDT
Yeah, Windblade and MTMTE are amazing on different levels... plus also love some Ramondelli. BUT I love all those for very different reasons. Same for this crossover. It's light, funny, and hits that nostalgic spot that makes you feel like a kid again... reading the original Transformers comics twenty years ago.

I guess my point is, doing side by side comparisons doesn't make a lot of sense for this one. You either get it, or you don't.
Re: IDW Transformers vs. G.I. Joe Volume 1 Pre-Orders (1601963)
Posted by Va'al on August 26th, 2014 @ 12:45am CDT
Coming at you like a python wrapped around an Energon-fuelled torpedo, is this month's issue of the new IDW publishing crossover ongoing from the minds and hands of Tom Scioli and John Barber: Transformers vs G.I. Joe! Check out a full preview below, keep an eye out for the Seibertron.com review.

Bullet points:
The comic book event of the millennium!
One world was never enough for this war!
Cosmic action as you like it!
Connecting Variant Cover by Tom Scioli

Synopsis
BOOTS ON THE GROUND! The war has begun—and no bars will be held! SCARLETT’s forces go head-to-head with MEGATRON’s hordes—and the most off-beat adventure in comic book history hits a new level of dangerous alliances, deadly invasions, and devastating betrayals!

The introduction to Tom Scioli's world of G.I. Joe and Transformers has really been like nothing else so far, in issues #0 and #1, even with John Barber's vigilant watch. And issue #2 continues the streak of whatever-it-is this comic is doing, with its anachronistically retro style and feeling, toy advertising without the products and general action-packed whimsicalness.

We headed with Scarlett's team to Cybertron at the end of last issue, and this is where we find ourselves straight away, as the Joe team brings the war begun by the Decepticons to their own turf - and it sets up the rest of the universe, as Autobots are subjugated by the Kirby-esque merciless godhead figure of Megatron, and his minions.

Thanos Darkseid Megatron on his throne

Though the big bad gun is a slow build-up, Scioli does not hold back on the even bigger, if not the brighter, guns: Trypticon and Devastator, all still through the (I guess) military eyes of Scarlett and the other humans, searching for targets in true Earthican foreign policy: stamp on, blow up, then investigate the remains.

There are some amusing references to the nature of all the characters and their plastic counterparts, though as I said, without the toys existing. The dialogue is still completely over the top, and is still not for everyone, along with the thread being very very thin, though a little tighter than last month. But it's also extremely enjoyable if you can buy into the whole premise.

And I suppose, the artwork. Tom Scioli perseveres in his Silver Age style of dotted galaxies, peculiar proportions, referential work (with Flash Gordon also featuring in some scene set-ups, as the commentary expands upon), mirroring what is already present in the dialogue and set-up with the visual style that some readers still consider a hurdle.

Personally, however, I find that not only does the style really work with the aim of the series, it allows Scioli as both writer and artist to place all of his toys across the drawing board, and just go wild with the colours, interactions and the stupidly fun lettering touches, from the titles to the ID cards to explosions and EEEEEEEEEEEEEEEEE.

I applauded the production of the book last issue as well, but it is nice to see Chris Mowry's work still shaping the final product. I am not a gigantic fan of the exclusive Liefeld and Tyndale covers, but the Ed Piskor Cobra heavy one and the two Scioli versions are perfectly in keep with the tone and content of the book (thumbnail: Retail Incentive cover by Scioli).

If you're not on board with Transformers vs G.I. Joe by now, I'd recommend to stop trying. This comic is clearly not for you, and by no fault of the readership. It is doing what it does unapologetically, and received warm-heartedly by many for very good reasons, and it's little to do with the actual lore of the franchises involved in the crossover, if only maybe as reference material and gags. And Scioli and Barber are clearly having barrels of fun with it.

What is particularly enjoyable, is that after the rollercoaster up a snake with wings in its nose that is the story, the two creators give themselves almost the same amount of space to talk about what went into the creation of the issue, page by page, panel by panel, deconstructing the whole frame and proving just how not seriously this is to be taken - but also how to, if so one wished. I will stop warning readers about this by next issue, but enjoy some green mean killing machines in #2 for now.
Re: IDW Transformers vs. G.I. Joe Volume 1 Pre-Orders (1602522)
Posted by hinomars19 on August 28th, 2014 @ 2:39pm CDT
This actually looks like a lot of fun! I've never been a Joe fan, and whilst the vs comics never caught my attention, I'd certainly like the idea of it becoming toys. However this comic looks like just what the doctor ordered-a good dose of fun in a franchise (TF) that seems to be trying too hard and failing everywhere! I'm so exhausted by the toys nowadays, they say they are going back to kid friendly but they look as appealing as cheap knockoffs. IDW's main TF titles sound awesome in themselves, but I feel the fandom get a bit too heavy and that adds negative weight to the stories (Gender, Hard head and Rewind, etc) I try not to dislike Bay's movies, but seriously the whole thing is also so very exhausting now.
This comic looks like a nice dose of marmite-you either love it or hate it! It's not trying to be agnostic or please everyone. If you hate it, you're not gonna discuss it or try to disect or argue it, and if you love it, you'll clearly have a blast. If I could find comics in my area, I'd probably get into this series for a nice bit of Brain down time!

Re: IDW Transformers vs. G.I. Joe Volume 1 Pre-Orders (1611478)
Posted by Va'al on October 7th, 2014 @ 5:36am CDT
In other IDW Publishing news this week, we also have a preview for the return of the crackers comics crossover: Transformers vs GI Joe #3! Check out below the first handful of pages from the issue, and check back in with Seibertron.com later this week for a review.

Transformers VS G.I. JOE #3
Tom Scioli & John Barber (w) • Scioli (a & c)
CYBERTRON INFESTED! The Transformers’ homeworld is crawling with tiny green invaders from the planet Earth—the G.I. JOE team! Also this issue—Funeral for a Friend. Many AUTOBOTS and G.I. JOE soldiers have fallen in the line of duty—but you've never seen a send-off like this!
FC • 32 pages • $3.99

Bullet points:
WAKE THE DEAD!!! In 3-D!!!
Not actually in 3-D—but you will not believe your eyes! Guaranteed!
The biggest thing ever gets bigger!
Interconnected Variant Cover by Tom Scioli!

I'm sure there are people who do...for whatever reason, but it is, in a word, ugly.

Optimizzy wrote:oh man. I just cant like this art. sorry.

I'm sure there are people who do...for whatever reason, but it is, in a word, ugly.

I guess it has nostalgic value...it reminds me of the pictures I drew in 5th grade.

Flashwave wrote:For that matter, why is the purple cyclops calling himself SOUNDwave

He isn't. Soundwave died in the first issue. Shockwave is avenging his death.