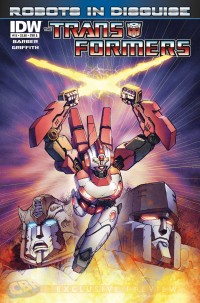 How do these two stories tie in to the existing IDW "Transformers" continuity?

"Spotlight: Bumblebee" thematically ties in with what's happening in "Robots in Disguise" right now. "RID" is about Bumblebee's fall; "Spotlight: Bumblebee" goes back to his rise. It's very much a part of the ongoing comic book continuity of the "Transformers" comics we publish. You don't have to have read any of the other comics, but if you have, you'll see where it fits in to the ongoing tapestry.

"Fall of Cybertron" is part of the continuity of the video games and the "Prime" television show and the novels. The comic actually also leads in to our comic book series "Transformers Prime: Rage of the Dinobots," which bridges the gap between the game and the TV show.

You've also got a lot of cool stuff happening in your "Transformers" ongoing series, "Robots in Disguise," with a massive storyline reaching its payoff this spring. What's been going on in that title and what can fans expect in the next few months as Megatron plots his revenge?

Since issue #1 of "RID," we've been trying to establish a new status quo -- a difficult-to-maintain, tense, post-war peace. The idea has been, from the characters' points of view, to move past war -- to try to live together in some sort of harmony.

As you might guess, Megatron doesn't want that. He wants the old status quo -- he wants war, and he wants to win that war. It's a battle not of Autobot versus Decepticon, but of old versus new.

His plan, though, is big and brutal. The action gets bigger and bigger and just when you think it's as nightmarish as it can be -- it gets worse.