IDW's REGENERATION 84 Reviewed - 'What About Starscream?' 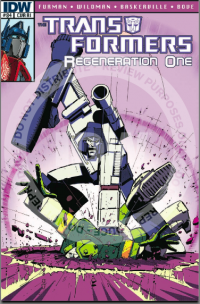 Eighty-four (84) is a pretty significant number to Transformers fans. All Transformers fans know 1984 was the year that this roller coaster ride kicked off, and many of us haven’t looked back since. Did you know that D-84 was the number of the rare Japanese Destron Abominus giftset? E-Hobby repaint 84 is the wonderfully fun repaint of the minibots into their similar Gobots likenesses. Do you know who Cybertron number 84 is from the Japanese toy line? His significance cannot be overlooked either, considering the fact that he plays a pretty major role in the new Regeneration series at this time. The question I have for you all is: will Issue #84 of Regeneration be as memorable as these infamous 84s are? I’ll take you through some reasons why you might consider purchasing this comic to read and decide for yourself.

The importance of Starscream to the storyline.

Starscream has done nothing yet. We know Megatron is paying him the ultimate snub by taking away his voice and making him a subservient ‘zombie’. All the Zombiecons are supposed to be subservient to Megatron, but Starscream is the only one whom he took the ability to speak from. Can you blame Megs? In a ‘redrum’ sort of way, Starscream starts to show the independence, and self-preservation that he is famous for, and that Megatron worked so hard to take away. Starscream makes a move this issue, although it’s very slow, and hard to understand, by the end of the issue the significance leads to more questions.

I mean he is. I suppose some might call him VERY FOCUSED. He’s truly showing that he does not care about anyone else, that his only goal is to make himself feel significant again, and he has worked very hard to make sure that has happened. In this issue, Megs is finally seeing his goal come true as his message is sent and received loud and clear. Unlike what IDW has done in the other modern G1series in which they gave Megatron a fairly noble history with clear motivations for his violent behaviors, and shown a clear brotherhood with Autobots that he then fought against, the Megatron in REGENERATION does not seem to have these motivations, or noble history.

The Wreckers are doing what they do best. Lots of rough and tough, special operations, ‘we may never return’ action. One thing that I loved seeing in this issue was the Autobot helicopters taking on the Decepticon jets in an aerial dogfight!
We get to see and learn more about individual Wreckers characters as they work to complete the goals that their two mission groups need to accomplish. Some are very much out of their league. I mean Springer versus Megatron seems like a great fight, but only if I write it. Here? Hmmm... Sacrifice, and loyalty are both expectations that they are all very willing to give to one another. Kup and Ratchet. Fates intertwined? Or Megatron and Ratchet? You need to read the issue to try to start tying this together.

Auntie Will Wipe Out Circuit Smasher

Doesn’t happen in this issue, but couldn’t it? Please?

Overall, there are some great reasons to grab this issue and continue reading this series. More reasons than I gave here (the Hot Rod and Grimlock mysteries...). 84 isn’t that special of an issue for REGENERATION, in my opinion. Not like 1984 special, or Abominus Gift Set special, but it does have Springer in it (C-64), and some great action. The art is consistently as it has been so far...good, bad, workable, refreshing, classic... whatever words you wanted to use to describe it earlier, still apply. There are some really great panels, and then some that are, not quite so great, but the style is consistent. You’ll continue your enjoyment of the series because or in spite of it. Issue 84 of Regeneration hit stores today. Grab it and continue the blast from the past-iness that we are lucky enough to enjoy.

Posted 2 days ago
News Categories: Toy News, Movie Related News, Cartoon News, Comic Book News, Site News, Rumors, Event News, Digital Media News, Collectables, Sponsor News, Game News, Site Articles, Store News, Company News, People News, Press Releases, Reviews, Sightings, Unlicensed Products News, Auctions, Transtopia, Interviews, Knock Offs, Collector's Club News, Editorials, Heavy Metal War, Podcast, Contests, Book News, Top Lists
Click here to post your comment about this news story!
Re: IDW's REGENERATION 84 Reviewed - 'What About Starscream?' (1428907)
Posted by griftimus prime on October 10th, 2012 @ 6:38pm CDT
cool art
Re: IDW's REGENERATION 84 Reviewed - 'What About Starscream?' (1428922)
Posted by Rodimus Prime on October 10th, 2012 @ 7:01pm CDT
IIRC, all their speech capabilities were taken away, not just Starscream's. The difference between he and the others is that Megatron left him a sliver of his conscience for extra humiliation, just enough so that Starscream was aware of what was happening but couldn't do anything about it. So far Screamer has been just like the others, but in this issue he seems to be reverting to what he was intent on in issue #78 of the original, killing Ratchet. Of course, that was cut short by Ratchet going Mike Tyson on him and causing the Ark to crash in the process.

As for Megatron being insane, I disagree. He might be megalomaniacal, but he isn't insane. You're right about him being focused though. he managed to accomplish what he had wanted since Prime caused them to crash at the beginning of the original story. Take control of the planet. He now has it, even if there are scattered survivors. IF he was insane, then he must have been insane from the beginning, because this is typical Megatron behavior, except now he's actually getting somewhere.

I guess the Wreckers are a good foil for this total Decepticon domination, and allows Furman to scratch his Wrecker itch and have all the fanboys fap over it. I'm not a fan of the Wreckers, never have been and never will be. Kup had been around in earlier issues as were a few of the others, but not as a team. Putting them together is fine, it serves the purpose of the story. But this is not a Wrecker-centric story arc, from the original, nor should it be. Hopefully with the conclusion of this arc in the next issue, the Wreckers go away and we get some real action with the Dinobots.

I hope Ratchet gets repaired and brought back, after (assuming) Prime kills Megatron in the next issue. But what will happen to the zombie 'Cons? I have a feeling Starscream's will is strong enough to snap him out of it, and he will take the zombie army and replace Megatron as the Decepticon leader.

The art is great as usual, I love that style. If the other series were like that, I'd probably follow them as well.

Overall, I am satisfied with this series revival so far, even if I do think #84 was the weakest issue yet. But it's all leading up to next month's story arc finale. Promises to be pages and pages of ass-kicking. Can't wait.
Re: IDW's REGENERATION 84 Reviewed - 'What About Starscream?' (1429011)
Posted by KNM2012 on October 10th, 2012 @ 9:46pm CDT
I must confess. Growing up,I did not read that many franchise-based comics. I remember my first being the issue of The Transformers that guest-starred Spider-Man (in his Symbiotic costume, which is how they got the okay from Mattel to add him to this story), and my favorite was (obviously) The Headmasters. Beyond that, my interest had (mistakenly) went to other series. This, to the point, when Dreamwave hired Simon Furman (who I bet wants to forget that period of his life), I thought his writing style might not fit my taste and I will not read any of his works.

I am glad that I was wrong.

Because while I am not collecting this portion of the series, as I am picking up Kerokero Ace for "Transformers All Spark," I love how he is making it be like a steam engine that is picking up the pace. And I for one wonder what is going to happen in issue 85 (as I plan to pick up the story arc that involves both Scorpinok and Grimlock - As well as the Dinobots). Is Starscream going to do something that will surprise us all? Will this lead to the end of Optimus Prime and Megatron? Will this lead to the revival of the Headmasters and Targetmasters... Or bring in a new era of Powermasters?

I don't know. I just know is that Simon Furman has gone from making feel like this would have been a fizzle, to the point I think it will sizzle all the way to issue 100.

KUMA-NIN Maximus wrote: when Dreamwave hired Simon Furman (who I bet wants to forget that period of his life)

Why? It was the best quality of work he has done since Marvel. Pat Lee's management skills and greed put the company under, but it was the best TF stuff Furman had written in over a decade, since G2 was finished. It was certainly better than the toilet paper he was churning out for iDW until ReGeneration started.
Re: IDW's REGENERATION 84 Reviewed - 'What About Starscream?' (1429100)
Posted by KNM2012 on October 11th, 2012 @ 4:14am CDT

KUMA-NIN Maximus wrote: when Dreamwave hired Simon Furman (who I bet wants to forget that period of his life)

Why? It was the best quality of work he has done since Marvel. Pat Lee's management skills and greed put the company under, but it was the best TF stuff Furman had written in over a decade, since G2 was finished. It was certainly better than the toilet paper he was churning out for iDW until ReGeneration started.

Simon Furman, on Pat Lee wrote:"If Pat had been some faceless bureaucrat it maybe wouldn’t now seem such an acute betrayal, but he looked me square in the eye and said everything’s hunky-dory. That’s what still, even now, burns."

Namely, it has nothing to do with how good War Within was. He even said in a September, 2005 interviewthat he wants to revisit it and finish off The Age of Wrath. However, you can tell that the feelings of betrayal lie deep within Furman. It was mainly due to the fact that Furman worked his butt off thinking that he had work. And it sounds like he still feels that Lee had no real regards for him as a writer.

Besides, honestly, I did not like any part of IDW's Generation 1. ReGeneration One is a different case, but that is about it when it comes to IDW's work (until they decide to revive The Headmasters).

Re: IDW's REGENERATION 84 Reviewed - 'What About Starscream?' (1429113)
Posted by Rodimus Prime on October 11th, 2012 @ 6:46am CDT
OK, that I agree with. He should have a sour taste because of Pat Lee. That guy ruined a lot of good things for a lot of people. And for what? Money. Asshole. I just wanted to make sure we were on the same page.