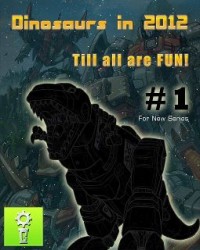 Third-party toy group iGear has announced plans to take on the iconic Dinobots in 2012. The teaser image featuring a silhouette of Grimlock, which is mirrored below, was posted to their facebook page earlier today. iGear currently has a lot of irons in the fire: the delayed PP05 molds, Mini Warriors, Wreckers, Sharkticons, and the list goes on. With so many ongoing projects will they be able to deliver the fan favorite Dinobots, or have they bitten off more than they can chew?

Prime Evil wrote:Why can't these guys work on other TF figures that Hasbro WON'T do. I'd like a Cybertron Deadlock, or even better, a Shockwave that doesn't suck like Energon Shockblast.

Also, the first one will be a slightly shorter MP Grimlock for §120 while the rest will never be made because iGear falls back into it's old habit of announcing too many projects all at once, gets bored with how much work it is and then goes right back to KOing stuff and cancelling everything they've announced.
Re: iGear Dinobots in 2012 (1328821)
Posted by redguyver on December 30th, 2011 @ 4:08pm CST
If this turns out to be another scaled down masterpiece figure or another custom idea they bit off( masterpiece seekers ) ...ever see that custom g1 grimlock that had seeker forearms so hands fold on and ball joints on shoulder meh .
Re: iGear Dinobots in 2012 (1328842)
Posted by Optimusfan79 on December 30th, 2011 @ 4:48pm CST
I hope that Grimlock along with the rest of the dinobots are ultra class size. It'll look nice having them fight the maketoys green & the best version of Devy, & the fact that on the show & comic they were bigger than everyone else except Jetfire.
Re: iGear Dinobots in 2012 (1328866)
Posted by Flux Convoy on December 30th, 2011 @ 6:10pm CST
Gimme a Swoop and I might care. Finishing previously revealed projects would help me to care even more.

Prime Evil wrote:I saw this on FB earlier. Meh, I don't need a Grimlock. I have MP and he suits me fine. Even in my Classics. But once we move past Grim and get onto the other Dinos, I'll be "oooo-ing" and "wow-ing" then.

Why can't these guys work on other TF figures that Hasbro WON'T do. I'd like a Cybertron Deadlock, or even better, a Shockwave that doesn't suck like Energon Shockblast.

After the attempt at Grimlock, do you really think Hasbro is going to give us Classics Dino's? Other than a possible WFC Grimlock due to the upcoming game, I think that is wishful thinking.
Re: iGear Dinobots in 2012 (1328979)
Posted by necr0blivion on December 31st, 2011 @ 1:49am CST
I own quite a few of iGear's releases, and I'm with others that want to see their OTHER products ready for sale before I see yet another teaser. They've also shown preview art of the new Cliffjumper, and I think at one time were associated with a new Bumblebee mold using the VW bug.

I do not want to see the MP Grimlock upscaled or downscaled, would rather that this were a completely new mold. Other Dinobots would be more appreciated than Grimmy, just because it's been done in the past few years.

Finally, if we're going to start seeing all these planned multi-figure products (Dinobots, MP series, possible Wreckers), would iGear just get their own factory so the price can drop from $100 a pop?
Re: iGear Dinobots in 2012 (1328993)
Posted by Sodan-1 on December 31st, 2011 @ 3:54am CST
Shit, anyone can tease a figure. Me? I don't know the first thing about making figures, but that wouldn't stop me teasing that I was going to release everything these guys have. How about you start putting your money where your mouth is iGear.

On topic, given the size of most of iGears figures, I could see these guys fitting in perfectly with the Masterpiece line which is exactly what I'd want.
Re: iGear Dinobots in 2012 (1329042)
Posted by zappatton2 on December 31st, 2011 @ 9:39am CST
Just got MP Grimlock for Christmas, now I want them all! Especially since he was my least fav of the bunch. But that said, I agree IGear has to finish some of their other projects. MP Soundwave perhaps? Or a VW Bumblebee to replace my Alternity one (since Bumblebee really does have to be a VW bug, and it would fit more with my Binaltechs if he was a bit bigger than Alternity). IGear can announce all the G1 inspired designs they want, I'll be on board, but let's see a few more in production before they get swamped with announcements. I need a proper MP Soundwave before all else!
Re: iGear Dinobots in 2012 (1329044)
Posted by Rated X on December 31st, 2011 @ 9:49am CST
I like that slogan "Till All are Fun" because it sends a direct message to Hasbro. Personally, I wish all the 3rd party companies would combine and form one big mega-company. It's time for Hasbro to retire from Transformers and let the real companies take over the game.
Re: iGear Dinobots in 2012 (1329051)
Posted by dinogeist on December 31st, 2011 @ 10:35am CST
I'd like to see the I-Gear monarch leader smaller scale mp megatron get made. it's been over 2 years since they announced this.
Re: iGear Dinobots in 2012 (1329083)
Posted by LOST Cybertronian on December 31st, 2011 @ 11:59am CST

Tidalwavex wrote:I'd like to see the I-Gear monarch leader smaller scale mp megatron get made. it's been over 2 years since they announced this.

Rated X wrote:I like that slogan "Till All are Fun" because it sends a direct message to Hasbro. Personally, I wish all the 3rd party companies would combine and form one big mega-company. It's time for Hasbro to retire from Transformers and let the real companies take over the game.

On one hand, the 3rd party guys have an amazing job (lad, amazing) on some stuff that we'd not see from Hasbro. Alternate heads (which have become quite common in the GI Joe lines Hasbro release) and other niche accessories that people might like, but are pretty far from necessary have been very welcome here. Completely original figures and add-ons/upgrades like the FP Insecticons, Bruticus Crossfire and Crazy Devy's G1 enhancements are all things which are purely optional, but add a lot for those of us who are interested in them.

On the other hand though, Hasbro has given us some truly outstanding toys this year. Tracks, , Wreck-gar, Wheeljack and Jazz are perfect examples. Aside from minor issues with paint jobs on some of these guys, the actual detailing of the toys, the transformations and all that are brilliant, and I've not seen a 3rd Party product that's seemed more of a match for the character being portrayed.

I would like it if perhaps some of the 3rd party manufacturers were able to agree amongst themselves to focus on particular projects, and avoid doubling up on stuff. There were what, 83 different Powerglide toys created this week? Then again, it is nice to be able to choose, so who knows? I like the 3rd parties as an alternative or an addition to the main lines of Trasformers, but there's no way I'd have been able to buy so many different toys this year if I was paying 3rd party prices for them all.
Re: iGear Dinobots in 2012 (1329210)
Posted by RK_Striker_JK_5 on December 31st, 2011 @ 7:12pm CST
I'd be kinda interested, but I rather like the Classics Grimlock, and iGear needs to get its other stuff done first.

As for the third-party companies taking over from Hasbro?

Or KO fans either, really. The Seeker mold CHMS loves so much was made by Hasbo. No Seeker mold = no KOs OF that mold.
Click here to view additional comments about this topic at the Energon Pub Forums ...