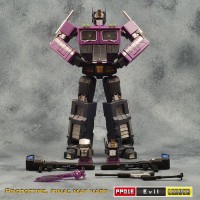 And new pictures of the 2nd PP01 Faith Leader are here: http://shop.igeartoys.com/index.php?route=product/product&product_id=75

We are trying our best to ship all 2nd PP01 Faith Leader soon, but the first week of october in CHINA is a national holiday fest ,So,parcel can leave china the second week of october, so please wait for a little more days, we will update the tracking number within 2-3 days, but may worked on October 10-15, thank you.

Thank you for choosing iGear. Best Look Yet at Optimus Prime's Truck mode in Transformers 7

Transformers Masterpiece MP-55 will be Nightbird

Transformers Buzzworthy Origins Bumblebee Found in the US

LiKwid wrote:iGear kind of.....sucks? Overpriced and their cq is laughable. I won't loose sleep over this one..

El Duque wrote:The interesting point in that email is the mention of a trailer in the works for UM. Otherwise it's pretty boring, just a white repaint and a shattered glass repaint of their Faith Leader. Now if they can manage to create a G1-ish trailer for UM that transformers into armor that will be impressive.

I gear is releasing cartoon accurate versions of the masterpiece prime figures. Now the Prime mold looks the same size of the masterpiece seeker. I hope after their coneheads they do a masterpiece megatron that size as well.
Re: iGear Pre-orders for PP01E and PP01U (1130598)
Posted by Skullcrunchberries on October 1st, 2010 @ 1:44pm CDT
Normally I don't mind repaints so much, but this is kinda... ehhh. Besides the ethics of skirting the legality a bit too close, nothing they've put out in the past few years has interested me in the slightest. Call me a negative Nancy, and feel free to correct me, but I think the remolded heads on their conehead seekers is the most original thing I've seen from them, well, ever.