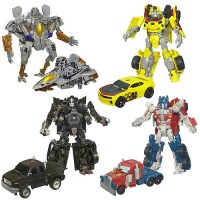 Thanks to the folks at Entertainment Earth, we get a look at the upcoming Transformers Activators third wave which features Optimus Prime, Bumblebee, Ironhide and Starscream. Optimus Prime and Bumblebee appear to sport new paint applications while Starcream and Ironhide remain true to their movie counterparts. According to the listing, these figures will be available by December 2010, just in time for the holiday season.

Keep your optics locked, right here at Seibertron.com, you Planet!

Posted 3 days ago
News Categories: Toy News, Movie Related News, Cartoon News, Comic Book News, Site News, Rumors, Event News, Digital Media News, Collectables, Game News, Sponsor News, Site Articles, Store News, Company News, People News, Press Releases, Sightings, Reviews, Unlicensed Products News, Auctions, Transtopia, Interviews, Knock Offs, Collector's Club News, Editorials, Heavy Metal War, Podcast, Contests, Book News, Top Lists
Click here to post your comment about this news story!
Re: Images of Transformers Movie Activators Wave 3 (1137073)
Posted by Carnivius_Prime on October 18th, 2010 @ 9:27am CDT
I don't much like the decos on Prime and Bee there but the other two look good for simple TF toys. My friend's kid kept messing about with my Voyager Ironhide (leaving him in a mangled have transformed, mostly mess of crap that a lot of kids seem to leave TFs in) so I might buy him that one there to keep his mitts off my toys.
Re: Images of Transformers Movie Activators Wave 3 (1137077)
Posted by First Gen on October 18th, 2010 @ 9:33am CDT
I bought the first wave of Activators for my 3 year old son cause he loved the animated ones so much and I think they are awesome. Besides Bee having a locking problem they are great figures considering how simple they are.
Re: Images of Transformers Movie Activators Wave 3 (1137078)
Posted by whacko on October 18th, 2010 @ 9:36am CDT
I have never been interested in the Activators.

I guess they are great for little kids that would have a hard time with the somewhat over-complex transformations we are seeing on a lot of modern transformers toys, but the target audience for this product has never been cleanly defined.

On the one hand they are durable and easy to transformer which makes them ideal for little kids. On the other hand they keep releasing repaints and variations which is something that a collector would be more interested in yet the lack of movie-authentic transformations and the kibble that "decorates" a lot of them toys would be a turn off for collectors.

Its kind of a "neither here nor there" things with them and it has always bothered me.
Re: Images of Transformers Movie Activators Wave 3 (1137209)
Posted by cybercat on October 18th, 2010 @ 3:54pm CDT
I actually love the little Activators--TFA totally sold me on the fact that the toyline could be small, easy to transform, but still pretty cool.

Starscream looks adorkable. Though he's outnumbered by those Autobots. :/

HK, bah, he's worth three lousy Autobots anyway. /delusional
Re: Images of Transformers Movie Activators Wave 3 (1137248)
Posted by DISCHARGE on October 18th, 2010 @ 5:24pm CDT
Just passed up Ironhide and Starscream at Walmart 30 miutes ago. If they were smaller like the Animated ones I would get them.