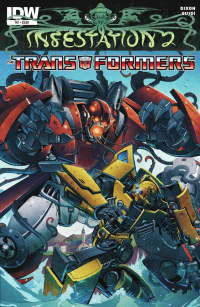 The Greater Gods of the Ancient Age have risen and whilst under its thrall the Decepticons have been used as pawns to capture mankind and allow the return of the old ones. Only the Autobots can stand in their way! Has humankind's time truly come?

Again, a very fleshling-driven story, the rise of the nameless horror is as horrific as you would expect it to be, the antagonist reclaiming the land as his own in order to return it to the water where it belongs, this second and final issue in the Transformers part of the Infestation story is the staple tale of all being lost until a certain breed of hero steps up to the plate to save the day.

Roughly translates as "We pledge allegiance to the flag..."

The Heart of Steel-style Autobot robots are well designed although some look much better than others, Wheeljack being the prime example of the latter, as in an attempt to make his aesthetic fit with the time his glowing um, ears - his most distinctive feature - look strange and ape-like whilst Hound is a definite winner, reataining all his known features and even keeping his military insignia. (You can already imagine the 3rd party developers are hard at work...) Of the few Decepticons seen, Shockwave in particular looks great but their involvement is brief, limited to fighting humans and little else, the focus here being very much on the otherworldly enemy that Dixon and Guidi have created.

Moses on a WHAT?!

Aside from the art, the Lovecraftian style is also applied to the Autobots themselves. Portraying these gentle robots as the worshippers of their great sleeping leader, they also have to sacrifice themselves to bring their great one from his slumber (thanks to SCIENCE!) setting up an epic god-like titan vs. titan battle for the fate of mankind itself, but this Optimus Prime has a darker edge to him, his demands to know why he has been awakened early giving him a Cthulhu-esque quality of the eternal waiting that is familiar to those who know the style and an interesting twist on the character, unfortunately because of the short nature of this arc its not something that is explored except upon seeing Ironhide, under the control of the great one, he merely warns his old friend that he will be treated as the enemy if he does not stand aside as he dives straight into the endgame with the ancient one, an attitude we're not used to seeing in a character as revered as this.

You got the touch! You got the POWAAAAAAAAHHHHHH!! (Copyright, HotrodRodimus Inc., 1996)

The rise of the beast itself is built up over a gloriously dark three early pages, but when you get to the big reveal you do feel that, given the scope of water-specific Transformer characters available, they have missed an obvious trick here. There is already a well-known giant sea creature in the Decepticons, there were even hints of them being used in the first book, and we know this monstrous horror is able to possess robots as well as humans... so why did they not chose to bring Nautilator forth to do its work whilst it remained safe in the depths and had its slaves brought to him? The cynical answer could be that this is a story arc about an ancient evil that also happens to have giant robots in a couple of issues, but it will always be regarded by the fandom as a missed opportunity to give a popular and rarely-used specialist character the chance to shine.

As I said in the review for the last issue, this is a tale for specialist interest only. Not as wide-reaching as the last Infestation timeline, but a bit more fitting in a world where humans are trapped on a world of warring giants.
Read at the risk of your own sanity.

Its still a great story, if you are a Lovecraft fan (hopefully its not too obvious I was) but just could have been just that little bit better if they had done their research a bit deeper.
Re: Infestation 2: Transformers #2 Review (1356020)
Posted by Stormrider on March 7th, 2012 @ 10:00pm CST
I was really looking forward to this story arc. I love Lovecraft but felt the bots didn't get enough screen time to make it interesting.