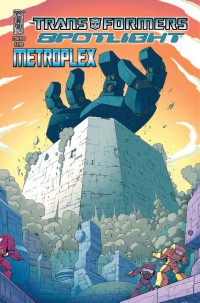 In the interview, Andy discusses his editing work with Star Trek, Transformers, and G.I. JOE., and his writing on three books to come, an adaptation of “Star Trek II: The Wrath of Khan” with artist Chee Yang Ong; a children's book titled “G.I. Joe Combat Heroes: We are G.I. Joe” (Similar to the 'I Am Optimus Prime' book released earlier) with Diego Jourdan and Gaston Souto; and the “Transformers Spotlight: Metroplex” one-shot illustrated by Marcelo Matere. CBR News spoke with Schmidt about writing and editing these comics.

So what did he have to say about Transformers Spotlight: Metroplex? Check it out below.

"“Transformers Spotlight: Metroplex” provided Schmidt with another interesting challenge, as the one-shot takes place almost exclusively in wide-screen presentation, whereby all but the first and last pages are double-pages spreads. “I felt that a story about a transforming city should feel big and I jokingly said I was going to do all spreads in the issue,” the writer said. “And then Chris Ryall, the Editor-in-Chief, called me out on it. Said I couldn't do it. And let me be honest, it was hard to do!

“Normally, you shoot for around five panels to a page, on average, but spreads are different and they have different rules so that the reader will read them properly. The canvas had changed. It was really tough, but what I'm finding is that every time I have an obstacle to overcome (especially since I'm still a fairly young comics writer) that it just makes me step my game up. It was a challenge, and figuring it out I think led to a better book.

“That all said, the real star of this issue is Marcelo, the artist. Holy crap, he hit this one out of the park! It's killer work and just stunning! He hit every spread perfectly. I could always read the spreads perfectly, my eye was never drawn down instead of across the spread. He's just amazing and really proved his ability with this one.”

Also notable about the Metroplex spotlight is that, despite the title, Goldbug is the point-of-view character, with Metroplex making a major though somewhat enigmatic appearance and hinting that he is at the center of some secret Autobot intrigue. “There are plans for Metroplex,” Schmidt confirmed. “There is very clearly something more going on that is seen on the surface. And yes, that will be picked up on later, but I can't say more...”"

You can read the full interview here, at Comic Book Resources.

Spotlight Metroplex will be arriving on comic book shelves next Wednesday, July 1st, and you can check out the five page preview that we posted in the news a few days ago here.