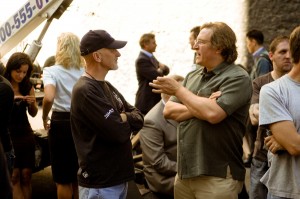 Via entertainment website Collider, we have a new interview with film producer Lorenzo di Bonaventura, which touches upon plot points of the upcoming Paramount live-action movie Transformers: The Last Knight. There are some definite spoilers about the plot, among some pointers about names, more names involved in the future Bumblebee spin-off movie, and so steer away

In between getting to see Bay work up close for the first time and watching tons of explosions and gunfire, I was able to participate in a group interview with producer Lorenzo di Bonaventura.

During an extended conversation with one of the few people that’s been involved in all the Transformers movies besides Michael Bay, he revealed how The Last Knight came together, how the film explores the Transformers mythology, what’s different about this sequel, how they determine which characters to include, if they listen to the fans when making the films, future sequels, the status of the Bumblebee spinoff, if people need to have seen the first four installments to understand The Last Knight, how Grimlock plays a larger role, their relationship with Hasbro, and so much more. If you’re a fan of Transformers, I promise you’ll love this interview because it’s loaded with info. Check out what he had to say below.

Are there direct connections, though, that you would see to the Bumblebee spin-off of things in this movie? Does this set things up?

Di Bonaventura: Sometimes is the answer. It’s not always, because I think then it feels like you’re really trying to widget it all together, and it becomes a little too neat. But I think–I don’t think, I know–some of the things will have a very direct relationship. You’ll see some things in here that are laying a pipe. You won’t necessarily know that it’s laying a pipe for another movie, but it’s there.

So there’s probably, in a really meaningful way, two or three things in this movie that really have a meaningful aspect in terms of it, and then there’s a bunch of little things. But we’re not making this movie to set up the other movies. That’s what I’m trying to say. If you get too carried away with that, you stop thinking about this movie.

And this movie, the two lines of mythology in a sense give you freedom to go a lot of different places later on that may or may not directly relate to another movie, but it’s opening up the universe in a way that I think, in that way it’s probably the most provocative, in terms of the movie. It’s opening a really large universe of what Transformers is, and where they’ve come from, and how we relate to them, and how they relate to themselves.

I’m curious where you guys are at on the Bumblebee?

Can you say who the writers are?

Is there a plan–I think it has a release date, if I’m not mistaken.

Di Bonaventura: I think the Paramount release said ’18. I think it said 2018. I don’t know if they put an actual date, but I believe they–honestly, that release came out about 4 months ago, and all I’m trying to do is get it ready as soon as I can!

Is this one of these movies where–will people have to have seen the first four to enjoy this film?

Di Bonaventura: No, no. That’s another conscious thing. The opening of the film will introduce the sort of exploration of the mythology that we’re going to do. Therefore, it’s not necessary to have seen the films before, because it’s going to establish the–let’s call it the mystery of the movie, and the direction the movie is going to go in.

That was a very conscious attempt, because that’s the other thing you forget as a film maker. Not everybody–you kind of fell like everybody’s seen it, so they can come right along for the ride. So the opening sequence, which is probably–I don’t know, it’s been a while since I counted the pages, but I’ll say ten pages, sets the mystery of the movie, of this movie. If you’ve never seen another Transformers movie, you don’t need to.

Was that Grimlock being more in the film–was that a nod to fans that wanted to see more Dinobots, or more action with the Dinobots?

Di Bonaventura: I think everybody wanted to see more Dinobots, including ourselves, you know what I mean? We all were like god, we wish we could have found a way in that story to include them more. So that was one of the hopes/priorities going into this, was to try to find a way to bring them back into the stories?

So is it more than Grimlock, or mostly Grimlock?

Di Bonaventura: There’s a few others, but Grimlock is, to me–I like Grimlock the most, so that’s probably why I talk the most about it, you know? And I just saw a sequence, so that’s probably why it’s on the top of my head. He’s funny. He’s like a naughty dog in this movie. He’s really sheepish when he does something wrong. He’s a great character. He’s really–we’re bringing out a side of him that you’re going to like–you’re going to relate to.

If you’re introducing a new villain, is Galvatron/Megatron still around? Does he play any role in this?

Di Bonaventura: Yeah, Megatron for sure is around. I mean, are we talking about some of the ones that are…

Staffer: You can talk about some of the new ones.

Di Bonaventura: So if you go back in the mythology, how Transformers were actually created, where did it start, where did they go from being a sort of a slave-race to a sentient race–we’re delving into that aspect of the mythology, so the characters that are involved in there are Megatron before he’s Megatron, Optimus before he’s Optimus, the Librarian, the Quintessons, there’s a whole group of things that have to do with how, in a sense, the Transformers were birthed, and also with how they were divided. What brought up the division, and what were the jealousies involved.

So I think on that level, you’re going to deal with things that feel from a stakes level higher, because of the importance of the sort of thought, right? There’s still, of course, the threat to the world and that sort of threat we have, but I think that threat is amplified now, because you’re going to feel why certain aspects of our world, why we’ve been fighting in a sense.

Yeah, he sure said the word "question" a lot.

Re: Interview with Transformers: The Last Knight Producer Lorenzo di Bonaventura: Dinobots, Villains, Bumblebee, Spoilers (1849683)
Posted by DeadCaL on December 30th, 2016 @ 2:55pm CST
"He’s like a naughty dog in this movie. He’s really sheepish when he does something wrong. He’s a great character. He’s really–we’re bringing out a side of him that you’re going to like–you’re going to relate to."

King Kuuga wrote:That's entering Quentin Tarantino or Peter Jackson levels of filmmaking. I don't think Bay has it in him.

It Is Him wrote:This interview has more character development than the last four movies combined

It really isn't that hard

Megatron before he’s Megatron, Optimus before he’s Optimus, the Librarian, the Quintessons, there’s a whole group of things that have to do with how, in a sense, the Transformers were birthed

We knew they were coming from those teasers in AoE.
Re: Interview with Transformers: The Last Knight Producer Lorenzo di Bonaventura: Dinobots, Villains, Bumblebee, Spoilers (1850303)
Posted by EvasionModeBumblebee on January 3rd, 2017 @ 4:25pm CST

Agreed. I hoped we wouldn't see them in the movies.
Re: Interview with Transformers: The Last Knight Producer Lorenzo di Bonaventura: Dinobots, Villains, Bumblebee, Spoilers (1850307)
Posted by william-james88 on January 3rd, 2017 @ 4:52pm CST

Agreed. I hoped we wouldn't see them in the movies.

To late, we already saw them in the beginning of AOE
Re: Interview with Transformers: The Last Knight Producer Lorenzo di Bonaventura: Dinobots, Villains, Bumblebee, Spoilers (1850315)
Posted by Sabrblade on January 3rd, 2017 @ 6:25pm CST

Agreed. I hoped we wouldn't see them in the movies.

To late, we already saw them in the beginning of AOE

To be fair, we didn't *know* that the Creators were specifically the Quintessons at the time. Just that those aliens things were "the Creators".

However, as I'm expecting the Movie Quints to be about as faithful to the their G1 namesakes as most other Movie characters with G1 namesakes are, I'd imagine that the only unique* thing that the Movie Quints will have in common with the G1 Quints is their name. So even if they were to have called the Creators by some other name, their depiction in TLK would be just as it will be in the movie with their using the name "Quintesson".

* - Meaning something that is only true of the G1 Quints. Like, being the Transformers' creators wouldn't count since there have been other TF creators in other stories who weren't Quints.
Re: Interview with Transformers: The Last Knight Producer Lorenzo di Bonaventura: Dinobots, Villains, Bumblebee, Spoilers (1850518)
Posted by Va'al on January 4th, 2017 @ 4:34pm CST
Another week, another video from the official social media accounts for the Transformers: The Last Knight live-action movie from Paramount Pictures! This time, we have a reaction video of fans (and cast member Isabela Moner) watching the first and only trailer so far for the fifth instalment in the series - which you can watch again here in HD. Check out the new clip embedded below!

Experience the trailer all over again with these awesome fan reactions! #Transformers

Thanks to Isabela Moner, Its11thPlanet, WesSideLive, Gattor Martin, and Tyrone Magnus for their awesome reactions!

Re: Interview with Transformers: The Last Knight Producer Lorenzo di Bonaventura: Dinobots, Villains, Bumblebee, Spoilers (1850520)
Posted by DestronMirage22 on January 4th, 2017 @ 4:46pm CST
I had the exact opposite reaction when I watched the trailer.

Seemed pretty "meh" to me, but it's cool to see others enjoyed it, and even got to be put in an official video.
Re: Interview with Transformers: The Last Knight Producer Lorenzo di Bonaventura: Dinobots, Villains, Bumblebee, Spoilers (1850537)
Posted by MGrotusque on January 4th, 2017 @ 7:51pm CST
Another embarrassing installment to the movie trilogy. When will it ever end......