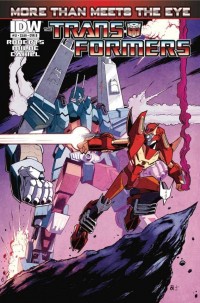 The official Transformers facebook page has shared an interview with writer James Roberts covering today's new comic release Transformers: More Than Meet The Eye Ongoing #12. We've mirrored the interview below for those without facebook access.

Q: Hi James. We’re at the end of your first year as writer on MORE THAN MEETS THE EYE. How have you found the experience so far?

JAMES ROBERTS: Thrilling and exhausting! Are we only on issue #12? Haven’t we reached the half-century yet?

Q: You obviously had a game plan from the first issue. Has this been tightly followed over this first year or have you had to deviate from it?

JAMES ROBERTS: I’ve deviated from it twice, most recently when writing issue #15 (which won’t be out until March 2013, but hey). What I’d intended to do with/to a character was no longer appealing because (a) that character’s personality had changed in the course of writing intervening issues, to the point where if he’d done what I’d intended for him to do it would have jarred; and (b) because it would have created a dead end in terms of telling the story. The second reason alone would have been sufficient to think again.

Second deviation: Krok was going to die (along with Flywheels) in #8 but I felt it would’ve been a waste.

I guess the 2012 ANNUAL was a deviation of sorts. We didn’t know it was going to happen until relatively late in the day. The crew was going to reach Crystal City in 2013, and Metrotitan was a late addition brought in consultation with editor and ROBOTS IN DISGUISE writer John Barber when we discussed how to link the two annuals.

Q: With the characters you’re spending time writing on, have you surprisingly found yourself drawn towards some than maybe you weren’t when you started?

JAMES ROBERTS: Oh yeah. Put Swerve and Whirl in that category. Swerve’s fun to write because he shoots his mouth off and forces others to react to him. Same goes for Whirl, come to think of it. Magnus is fun, too.

But I suppose I’m answering the wrong question – I’m saying which characters I enjoy writing. In terms of characters that I’m drawn towards, and feel a fondness for, I’d say Rewind, Chromedome and Tailgate.

Q: Who would you say has been the easiest character for you to write for?

JAMES ROBERTS: Swerve and Whirl are easy–relatively speaking, of course. I found Rodimus tricky in the lead up to writing issue #1, but that was a case of my needing to get a handle on him.

In terms of grappling with characters once the series was up and running, I guess Cyclonus presented some challenges. He’s stern and aloof and self-sufficient, and there’s only so many times you can have him staring moodily into space. But issues #12 and #13 are “his” as much as anyone else’s, and since then I feel I’ve got a proper handle on him – I know who he is now.

Q: Out of the first 12 issues, has there been any one script that you found particularly hard to break into a story?

JAMES ROBERTS: It’s more a case of breaking a story into a script, because most MTMTE stories would comfortably fit an annual. Issue #6 and the conclusion to “Shadowplay” (#11) were… challenging. Oh, and #13—there was so much going on in that one that I had to… well, wait until you read the issue.

Q: From the first 12 issues, which one story would you count has your personal best so far, and is there one you would change if given the chance?

I’m proud of the Delphi storyline (#4-5) because there’s material for about four separate stories in there, and I was pleased with how it meshed into one. “Shadowplay” came together pretty well, I thought – I was extremely worried about someone, somewhere guessing the identity of “Senator X” and it spreading across the internet.

But I think I said a while ago that with MTMTE I wanted to tell a good number of proper, self-contained standalone stories, and on that basis I think “Interiors” (from #6) is my favorite.

(By the way, if you’d allowed me to pick 2013 stories I’d have given a different answer.)

What would I change? Oh, lots. I try to make each issue the very best it can be, but I always think of things I wish I’d done differently. I think I’d tinker with #7 the most.

Q: How have you been enjoying the fan reaction to MTMTE when you go and attend conventions/events?

JAMES ROBERTS: It warms the cockles of my heart when I speak to people who enjoy the book – particularly when they’re fond of the characters. The comics and TV series and books I’ve enjoyed over the years have, for the most part, had a passionate and devoted following, as opposed to being quite liked by millions.

I speak to people who are passionate and devoted about MTMTE, and I’m over the moon. It absolutely spurs me on to make each issue, each story arc, better than what went before.

I’m only the writer, though. I was at a convention last August and I was sitting at the guest table between Nick Roche and Livio Ramondelli, both of whom had their wonderful artwork spread out in front of them. In front of me were recent issues of MTMTE. And this young chap – maybe 9 or 10 – loitered in front of me, looking at the issues, and in the end he asked if I’d drawn them. And I’d barely begun to say ‘No, I write them,’ when he’d spun on his heels and joined the back of Nick’s massive, snaking queue.

Q: You’re dealing with a very large cast of characters, and certain ones get more page time than others. We will be seeing more time dedicated to some of the others on the Lost Light crew?

JAMES ROBERTS: For the first year I wanted to focus attention on the core cast. But by the end of MTMTE’s first Transformers UK-style epic, starting in issue #16, there will be – how shall we say? – a few vacancies. There’s not a rotating cast as such, but you may be saying goodbye to some characters and hello to others.

Q: Can you give us one small tidbit, something that we can look forward to seeing during season 2 of MTMTE?

JAMES ROBERTS: If I can pull it off as intended, the aforementioned epic will pull together at least one dangling story thread from each of the first 12 issues.

To give you a more specific tidbit: the story in issue #14 features a prologue entitled, “A Functionist Calls.”