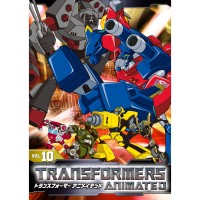 While US fans are still patiently waiting for the release of Transformers Animated season three, the release date of the final Japanese dub Animated Volume 10 has been revealed. Paramount Pictures Japan list the release as May 27, 2011 at a retail price of 3,129 yen. Amazon Japan has also listed a preorder. The DVD will include the following episodes.