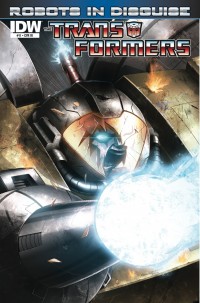 AL: The series has been focusing on two of the most cunning and devious characters in the Transformers Universe: Shockwave & Jhiaxus. From a plotting perspective, is it difficult keeping the machinations of this pair going forward without giving away too many details too quickly?

JB: Like I said, Shockwave was keeping pointedly quiet through most of RID. Suspiciously so. Keeping track of what he was doing behind the scenes, and when he was doing what–well, that’s part of the overall story going on. Lots of characters have secret goings-on, so it’s part of the challenge to keep up with everybody. What they’re saying versus what they really mean, and who’s really controlling who.

I have no idea what's going on with Prowl's face in that last panel there.


Well, I have an idea, the nose and mouth are off. If the left side of his face or his nose/mouth were drawn differently, he'd look right. As is, really awkward looking. Shame, Guido mostly does good work so this is a strange misstep.