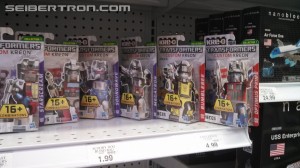 Seibertron.com's own podcaster ScottyP was out and about and had a couple of interesting finds. The Custom Kreons were found in a Toys 'R' Us in Raleigh, North Carolina while the Construct-Bots Scouts were found at a Wal-Mart across the street.

Re: Kre-O Custom Kreons and Construct-Bots Scouts Bumblebee and Thundercracker Found at Retail (1521969)
Posted by Goggle Convoy on October 5th, 2013 @ 12:55pm CDT
I found these same guy at the same Wal-mart in Raleigh, NC and picked up Thundercracker and Starscream.

The Starscream had a new factory imprint number that matched the number on Thundercracker and was different and in a different place compared to the original Wave 1 Starscream. The new release of Starscream had "32071" imprinted next to the small Hasbro logo on the back of the box.

Before everybody rushed out to find the new Starscream, there's some good news and some bad news.

For most people, they probably won't care, so this warning is for those who suffer from OCD, like I do, which is why I didn't pick up the original Starscream after hearing about his naked head. Thankfully, I picked both up at the same time, so I can just swap heads. But not everybody is going to have that option with 1 Starscream for every 3 Thundercrackers in a Wave 2 case.

Quick edit: After searching the boards and re-finding the post about a half-painted head, it seems the origial Starscream release also came with a smirking face. My point about the boxart and instructions showing them with each other's head still stands though. But's it's not like it's the first time Hasbro screwed something up, either with the heads themselves or whoever they hired to do photos for the boxart and draw up the instructions.

Re: Kre-O Custom Kreons and Construct-Bots Scouts Bumblebee and Thundercracker Found at Retail (1522205)
Posted by chuckdawg1999 on October 6th, 2013 @ 5:56pm CDT
I ordered Thundercracker off Amazon. I kinda like the look but do wish it was the same parts as Starscream so the Seekers all looked the same. The hand guns are a unique touch.