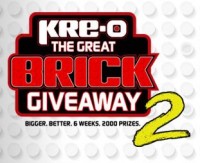 Hasbro has announced the Kre-O Great Brick Giveaway 2, click here for a a chance to win one of two thousand Kre-O sets (must be between the ages of 6 - 18). See official rules below.

Posted 2 days ago
News Categories: Toy News, Movie Related News, Comic Book News, Cartoon News, Site News, Rumors, Event News, Digital Media News, Collectables, Game News, Sponsor News, Site Articles, Store News, Company News, People News, Press Releases, Sightings, Reviews, Unlicensed Products News, Auctions, Transtopia, Interviews, Knock Offs, Editorials, Collector's Club News, Heavy Metal War, Podcast, Contests, Book News, Top Lists
Click here to post your comment about this news story!
Re: Kre-O the Great Brick Giveaway 2 (1361054)
Posted by Megatron Wolf on March 22nd, 2012 @ 1:27am CDT
6-18 your kidding me right? Well at least the age limit is being raised every time, maybe one day itll be removed and us older fans can win stuff too.
Re: Kre-O the Great Brick Giveaway 2 (1361055)
Posted by Screamfleet on March 22nd, 2012 @ 1:48am CDT
If you really wanted to do it you probably lie about your age, what are they going to do, ask for ID?
Even still, it's meant to advertise the kre-o's to kids.
Re: Kre-O the Great Brick Giveaway 2 (1361086)
Posted by Chaingun on March 22nd, 2012 @ 7:07am CDT
Well I guess they had to get rid of them somehow

Chaingun wrote:Well I guess they had to get rid of them somehow

Seriously, I own that leader sized prime, and it ain't too impressive. At least mine came free...


Nah, I wouldn't sue, but it still sucks that they're ageist like that.
Re: Kre-O the Great Brick Giveaway 2 (1361520)
Posted by Autobot-Hellstriker on March 23rd, 2012 @ 11:28am CDT
It stinks that hasbro never allows Europe to participate any of these promotions, i mean transformers is a global market, not american only.