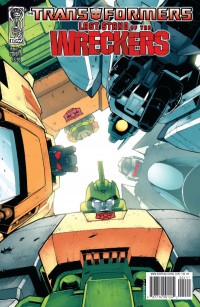 The third issue of the Last Stand of the Wreckers 3 left us mourning a fallen Wrecker, while also leaving us with questions, such as, who is Aequitas? Rest assured, this five-page preview from BZZURKK will answer that question, or you can simply wait until this Wednesday, when Last Stand of the Wreckers #4 will be available at your local comic store. Be sure to check out the description, covers, and a snippet of the preview below, while the rest can be seen here.

Transformers: The Last Stand of the Wreckers #4

The WRECKERS have found Aequitas, and things have suddenly become a whole lot more complicated! As the AUTOBOTS’ special ops team stands on the brink of dissolution as the fatalities mount, PERCEPTOR realizes that drastic action is called for—but having come this far, who among his teammates is prepared to make the ultimate sacrifice?
Transformers: The Last Stand of the Wreckers
32pg.
Color
$3.99 US . Really makes me wonder what Prowl is playing at with Ironfist though. Man this is going to be so epic