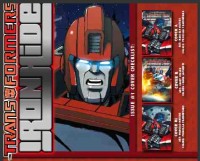 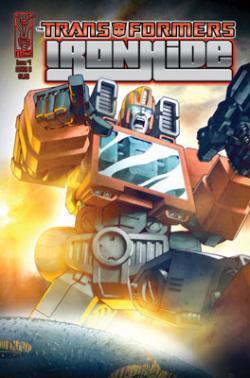 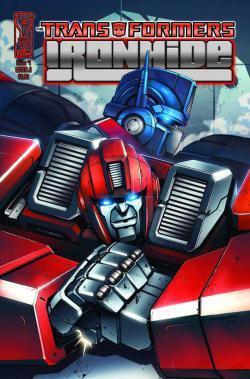 -from the Ironhide press release back in February-


You heard it from IDW’s own editor, a ‘must have’.

I’ve been chatting with Mr. Andy Schmidt (IDW Transformers Editor) about all things Transformers, but that’s a tale to share another time. Today we want to review the Transformers Ironhide comic #1 a bit. The five page preview is out, and tomorrow, you can buy this issue on your comic book shelf.

I’m going to share with you my thoughts for some reasons why you may pick the issue up, or you may end up avoiding this issue and series altogether.

BUY IT: Number one this is a G1 series. If you like G1, you will probably enjoy it, or at least comparing it to previous G1 incarnations of characters.

SKIP IT: Because it’s IDW’s new take on G1, and as we have seen, its had its good points (Last Stand of the Wreckers), and its bad points (Ongoing's slow start, and the Bumblebee miniseries).

BUY IT: It’s Ironhide, and from the first issue he seems to be the character that we know and love, albeit, he does not seem to have his Cullen-isms that he was famous for from the G1 cartoon, he is still tough, mature, smart, and a good warrior. Added to that, it looks like we get to have more history about Cybertron during the war, albeit from Ironhide’s point of view. BUY IT: The art is by Casey Coller, with covers by Marcelo Matere, and colors by Joana Lafuente. This has been a very competent crew in the past, and it looks like we can expect the same thing this time around. The vision here seems to be yet another redesign, Cybertronian in nature, of characters, but they are familiar, and some characters have designs previously used in IDW’s TF-verse. G1 designs are respected, and used to create the Cybertronian forms. I think Coller does a very good job with Transformers’ faces, bodies, forms, and proportions. The scenes feel a bit crowded at times, but due to the part of the story being told it’s needed, and is nowhere near as crowded as many panels were in Megatron Origins.

Did I mention you can tell who characters are? SKIP IT: Don’t like yet another artists rendition of Transformers? You really got used to Don’s portrayal of characters, and don’t want to go back? 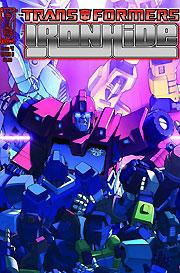 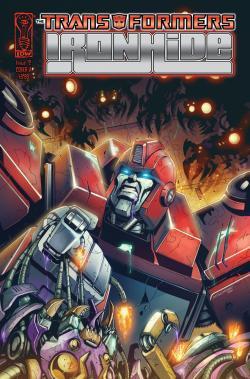 SKIP IT: “I Hate mysteries. Don’t like to try to tie things together. The Swarm again, oh know...it’s AHM revisited!” BUY IT: Action, and background TFs populate panels, and they are recognizable!

SKIP IT: “IDW never uses my favorite Transformers, and if they do they die right away.”

BUY IT: Prime’s learning to be a leader through the tutelage of Kup and Ironhide. 
RECOMMENDATION: I’ve read the issue, and I suggest you might want to give the series a try, especially if you are interested in G1, or even mildly interested in seeing where IDW is taking their vision of G1.

I hate to admit it, but Ironhide has never been one of my favorite characters. He was likable enough, but the van alt mode, and the cranky nature, turned me off a bit. Then there was Kup, and I realized Ironhide was not that bad...but it was too late then, because he had died nobley in the movie, never to return to my beloved cartoon series. Poor Ironhide, nobody wants to keep you around. Wrong, looks like Costa and Schmidt want you around for at least 3 more issues!

*Mostly I think the toy turned me off to Ironhide the most. So odd, and so different from the cartoon model. It was very hard to like a character that one could not own the toy of, at least for me anyway, and there was no desire to want Ironhide’s toy at ALL!*

The first issue of this mini lays the story out well, includes some great action, and some intriguing mystery set up to be solved by the final issue. The art is really enjoyable, and the story flows well, even if I don’t like the dialogue much (Prime ‘sounds’ different-almost cocky at times).

The first issue of four is here, and Ironhide’s liquid nitrogen may be needed to cool off the fan reaction (take that how you want).

Decepti-creeps look out, Ironhide is slowly, but surely here to save the day! (I can’t believe I just wrote that.)

READ IT TOMORROW, after you pick it up from your local comic guy or gal!

I'll probably give this a go. I always loved toon Ironhide, the only TF who can carry an accent. Besides, since I bought the custom head, I can't put Encore Ironhide down.

I wasn't IDW's biggest fan the last few years because I felt they changed too much but I like what they've done with Prowl and the Wreckers lately so hopefully Ironhide will follow suit. Prowl and Ironhide being my favurite G1 Autobots.
Re: "Leakin' Lubricants!"- Transformers Ironhide #1 Reviewed (1073206)
Posted by Tigertrack on May 11th, 2010 @ 12:14pm CDT

Windsweeper wrote:I really like that pic of Axer. But whose the other TF? I can't place him.

I'll probably give this a go. I always loved toon Ironhide, the only TF who can carry an accent. Besides, since I bought the custom head, I can't put Encore Ironhide down.

I wasn't IDW's biggest fan the last few years because I felt they changed too much but I like what they've done with Prowl and the Wreckers lately so hopefully Ironhide will follow suit. Prowl and Ironhide being my favurite G1 Autobots.

Make sure you pick up Wreckers #5 next week then... more Prowl, and I think it will make the Prowl slappies like you and me happy, but also, make someone who likes the colder, logical Prowl a bit more happy too.

The facial hair kind of throws off that bot. It's the same guy whose on page one of the preview.