Linkin Park's Chester Bennignton Comments on Their Involvement in Transformers: Age of Extinction 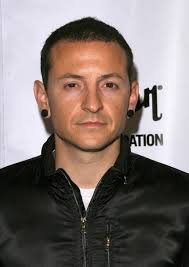 After having featured songs in the all three previous Transformers live action films Linkin Park's involvement in next month's Transformers: Age of Extinction still seem to be up in the air. Linkin Park vocalist Chest Bennington recently spoke to Moscow's Europa Plus radio station where he was asked if they would be participating in soon to be released film.

Interview transcribed and translated via ChesterBNetwork:

Will the band participate in the creation of music for the fourth part of “Transformers”?

There’s definitely some discussion going on, something related to producing music, so I hope everything will be settled and we can take part in the new Transformers. We really like the film itself, and our partnership with Transformers. We grew up loving the Transformers, so it is very cool to be a part of this.

JazZeke wrote:The involvement I want to see from Linkin Park? No more.

Seriously, what's the big deal? If you don't like them then don't listen. Why can't the people who enjoy their music just enjoy it? Anyhow its not like their going to be doing the main theme. If they are involved, it sounds like it's going to be either just back ground producing, or a secondary track.

As far as the original interview with Joe Hahn, I can see why he make the long winded.. "Noooooooooo." Going from the movie theme to producing can lend that kind of reaction.
Re: Linkin Park's Chester Bennignton Comments on Their Involvement in Transformers: Age of Extinction (1576226)
Posted by Autobot032 on May 22nd, 2014 @ 1:16am CDT

T-Macksimus wrote:Been following LP for years, listening to their progression and how their work has changed and matured (which most fans or music listeners in general don't seem to get, they just get pissed off when something doesn't sound exactly like THEY think it should) and while the songs they did do fit well with the Movies, even though in one case they just they the track off a new release into the mix and it just happened to fit for Transformers, I don't think they should continue their association with the franchise.
Yes, Transformers are all about change and adaptation but LP has changed too much to continue with the TF franchise and likewise, the franchise has changed to the point where they need too not have LP tagging along.
I'm not thrilled about TF4 even being made to begin with and neither am I am impressed with LP's work after the "A Thousand Suns" album so they may actually still be a good fit for each other(see: "Beating a dead horse") but it just seems to me that if the TF's are going darker in the tone of the movies and ramping up the action (cheapening the franchise, imho) then they need to go with someone like Avenged Sevenfold or Disturbed for a headlining soundtrack contribution.
These simply aren't a "Thinking Mans" type of movies and you don't need to involve a band that has shown some maturity and intellectual progression over the years in such a project.

All day, every day, all I do is think. Your argument is invalid. And the movies have shown maturity. The first movie was basically a kids movie. Two kids had a secret and tried to hide it from their parents and the entire world, basically. ROTF was more on the lines of... "teenagerish" I'd say. Shit got real and brought out into the forefront and no one could hide from the threat of Decepticons and the existence of the Autobots anymore. And DOTM was more adult-ish. With actual consequences taking place in the result of harboring the Transformers on earth for so long.

And AOE is a new beginning. A chance for the grown ass TF movie franchise to re-invent itself. Just like a newly formed adult getting a job that pays enough to actually buy his own house and allows him to do whatever the hell he wants to do next, forging a brand new public image for himself.

Well, I'll be... I'm absolutely impressed with this post. That hit the nail right on the head.

Nice and openminded. Good for you!

As for my personal opinion, I liked the music selections for TF and ROTF, but didn't care too much for DOTM's choice. That said, if they're involved, that's fine with me. It's kind of like a packaged deal, they go hand in hand. Like milk and Oreos. However, I do enjoy Imagine Dragons quite a bit and I like the song choice so far, I'd also like to see where they could take this partnership.

If LP doesn't get included, it's not the end of the world. If they do, well that's cool. There's room for both them and Imagine Dragons on the soundtrack.
Re: Linkin Park's Chester Bennignton Comments on Their Involvement in Transformers: Age of Extinction (1576306)
Posted by shockblast2 on May 22nd, 2014 @ 9:57am CDT
LOL......Chester.