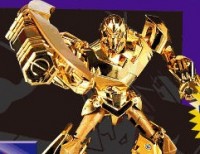 Takara Tomy has released another Lucky Draw figure for Transformers Animated, this time is the Deluxe Class Gold Megatron.