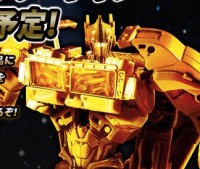 In order to qualify for the lottery, collectors need to collect any of the 2 "Campaign Code" to participate.

The Campaign Code are hidden in:

1: I don't collect EZ/Cyberverse. They just look cheap and nasty like a McDonalds toy.

2: While I might be tempted by AM/Microns the only ones I'm interested in are Arcee and Ratchet but if they use stickers instead of paint (which I suspect is true), I probably won't get them.

3: If I wanted an Optimus Prime from TF:Prime it'd have to be the FE mold. The RiD mold has odd proportions and to make the whole thing gold would be tacky.

4: It's a lottery/lucky draw. I wouldn't hold my breath on winning something so random even if they accepted foreign entrants. Competition/lottery laws will vary in different countries which is why such things never cross borders.