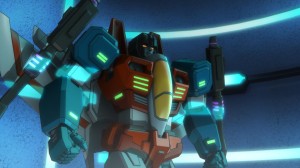 The second episode of the Machinima series Transformers Combiner Wars is now online. It is titled "The Council" and features Starscream and Rodimus.

You can watch it here if you are in the US or right below in the embedded youtube video if you are outside the US.

Let us know what you think of it in the ongoing discussion on the series.

HilltopOfKaon wrote:Am i the only one who can't watch it? Every time you post the episode, i'll click the link and it says " Video has been removed" or "Video not available".

william-james88 wrote:You can watch it here if you are in the US or right below in the embedded youtube video if you are outside the US.

Re: Machinima's Transformers Combiner Wars Episode 2 The Council Now Online (1813626)
Posted by william-james88 on August 9th, 2016 @ 12:03pm CDT
This episode was fine. Though with only 5 minutes, it would be fun if it didnt take one whole minute before anything happens.

Also, that was quite the delayed reaction to Starscream getting shot and a very weak sounding alarm.

We were told from the press releases that this would be a post-war show with the Autobot/Decepticon civil war long over.
Re: Machinima's Transformers Combiner Wars Episode 2 The Council Now Online (1813637)
Posted by william-james88 on August 9th, 2016 @ 12:26pm CDT

We were told from the press releases that this would be a post-war show with the Autobot/Decepticon civil war long over.

Was just expressing my thoughts from when I first heard we would get a series. And saying I would have preferred that.
Re: Machinima's Transformers Combiner Wars Episode 2 The Council Now Online (1813640)
Posted by Kurona on August 9th, 2016 @ 12:35pm CDT
Rodimus saying things like "turn this threat into an asset" and being the first one to suggest building an army of Combiners just... strikes me as intensely wrong.

Don't want people to know you have the Enigma? Keep it in a massive glass case that according to Windblade's sniper rifle, can be seen by anyone with a decent case of binoculars.

Talking of Windblade's sniper rifle, that's another interesting architectural decision. The place where the Council, the leading party of Cybertron in a time of war, unease and crisis; is a wide-open area with not even glass between them and a bullet from miles away. Like... wow. How has no-one taken out these morons before now?
Re: Machinima's Transformers Combiner Wars Episode 2 The Council Now Online (1813659)
Posted by william-james88 on August 9th, 2016 @ 12:52pm CDT

Kurona wrote:Rodimus saying things like "turn this threat into an asset" and being the first one to suggest building an army of Combiners just... strikes me as intensely wrong.

We start on Cybertron this time, as apposed to Caminus in the first episode, and we quickly change to a shot from what I'm assuming is Starscream, as it cuts back and we see him flying just a moment later. Starscream is on a reconnaissance mission, to gather information on the state of Cybertron. On his flyover, he witnesses some bombs going off on the surface below.

From this vantage point it almost looks like Starscream was the one that dropped the bombs, but I seriously doubt this is the case.

We pan backwards, as mentioned before, to see the Decepticon fly to a large silver building. Here again we have an issue with the choppy animation. As mentioned previously on the boards, Starscream appears really choppy, while the background moves fluidly with the camera. Starscream enters the building from a top landing bay, and slowly descends using the thrusters on his feet. He lands and meets with Rodimus and, randomly, the Mistress of Flame. These bots are apart of the "Council" we've been hearing about.

They discuss the state and threat of the combiners, and how word of Computron and Menasor's fight has broken out on Cybertron. This is why there's so much unrest on the planet. Peace has been achieved between the AutoBots and Decepticons - and the council doesn't want to ruin that. They all consider using the "Enigma of Combination" for one reason or another. Rodimus wants to use it to take over an army of combiners, turning a threat into an asset. The Mistress wants to use it to wipe out all the combiners in one felled swoop. Starscream has an objection to this, as the combiners are transformers, too. Wiping them all out would be genocide. Besides, some of the Combiners have been loyal to, even fought for, the council.

Rodimus and the Mistress of Flame are introduced to the series

The Mistress feels it isn't Starscream's place to talk about killing other transformers, given his past. We also learn in this discussion that not only is Optimus Prime in hiding, but Megatron as well.

See, now we're getting somewhere. Now we have a story to work with. One that plays with the original concept that was proposed, and not too terribly I might add. There are still some issues, such as some of the lines delivered are a bit stiff, and the mouth-movement-to-actual-voice-and-words is way off and not ignore-able, but it goes leaps and bounds above episode one. But we're not done yet.

We start to view the council meeting through the scope of a sniper rifle. It targets Rodimus, Starscream, and the Mistress. The council walks over to the Enigma of Combination, and agree they should study all it's powers before making any brash decisions.

A sniper sets up an attack on the council

The sniper is revealed to be Windblade, set on stopping the council one way or another. She decides to fire at the Enigma, and somehow misses. She hits Starscream in the shoulder, and he falls. Another problem I have is right here. There's such a weird, delayed reaction to Starscream being shot by the rest of the council. There's a good two seconds before they really do anything. The Dialogue and sound effects become a little clunky here, as the Mistress raises the alarm and Rodimus checks on the former Decepticon.

The Enigma of Combination

We return to Windblade. She hears a noise behind her and immediately jumps and turns around. It's revealed to be Optimus Prime, now out of exile. He still doesn't say anything, and the episode ends pretty much on the same shot as the previous one.

Overall, episode two is a lot better than episode one. It gives us actual emotions, and actual dilemmas for the characters to face. It still suffers from that 5 minute time constraint, and trying to make people understand a whole new continuity with a new story line in 5 minutes in near-impossible. My only wish is that the past to episodes would have had a bit more of each other in them. Meaning, episode one, the hard-to-follow action-feast that it was, could have definitely used a little more (or, a lot more) story. And, on the flip side, episode two could have used a bit more battles and action. But, all in all, you're starting to win me back Machinima. That Wheeljack name-drop didn't hurt, either.
Re: Machinima's Transformers Combiner Wars Episode 2 The Council Now Online (1813668)
Posted by 1984forever on August 9th, 2016 @ 1:25pm CDT
Boring. I don't want to see Autobots and Decepticons talking unless they're talking about breaking each other.

The mistress of Flame is just taking up space. She doesn't look like she can transform into anything, so she shouldn't be in TRANSFORMERS.

They mentioned Wheeljack?...didn't catch that.

Yep. Just before Scream gets shot, when they're all looking at the Enigma. Rodimus says something like "I can have Wheeljack take a look at-"
Re: Machinima's Transformers Combiner Wars Episode 2 The Council Now Online (1813673)
Posted by ricemazter on August 9th, 2016 @ 1:35pm CDT
This episode, I think, was slightly better than the last if only because we understand more about the context of the setting. Again, though the pacing and priorities of the directions are just strange. In a five minute long episode why, again, do we spend almost a minute and a half of the episode, almost a quarter of the run time, on establishing shots and Starscream in an elevator. These shots don't correspond to anything Starscream says about the situation getting worse, and are borderline filler.

Despite having more exposition, there are still too many missing pieces for us to really understand the stakes. Were the current combiners created using the enigma, or were they built during the war? If no one yet understands the enigma, how do they know it can be used to create an army of combiners or destroy them? If the war is over why does the council need more combiners? Is it to take current combiners? Are the combiners being treated as their own faction? If so, why are some loyal to the council and some not? Why would there be a question of wiping all of them out if some of them aren't acting in their own self interest? So far, there are too many unanswered questions.

Also, it seems that someone at some point switched the lines for Hot Rod and Starscream in the scripting process. Especially since at the beginning of the combiner wars comics it was Starscream that wanted to build more of them.

The weirdest thing about this series for me, with all the gravitas surrounding combiners, is that it feels like an advertisement for the toyline, which is already winding down for titans. Correct me if I'm wrong, but aren't the only ones really left to be released Computron and the G2 versions of the others?
Click here to view additional comments about this topic at the Energon Pub Forums ...